Mirror, Mirror On The Wall


To clarify things a bit I'm going to start off by telling you that he work you see below occurred before December 25th.  I've been a week behind and am just getting caught up which has confused more than one reader.  Luckily, all of the windows completed in this edition of the Blog made it out on time to become Christmas gifts.  So let's get started by first looking at the largest window completed ust before Christmas.

Here's Lynn's completed 'G' Window.  There's a lot going on in this piece and Lynn's attention to symmetry is spot on.  Now, Lynn may say that she wasn't focusing on that aspect of the window but in truth she may just have not realized doing it.  A window usually becomes unsymmetrical when a few pieces go over the pattern line and their neighboring pieces are adjusted to make everything fit.  After two or three of those unplanned adjustments you end up with a window that no longer mirrors its opposite side and that's when things start to look helter-skelter.  That is  certainly not the case in Lynn's window. It's perfectly balanced in both color and design. 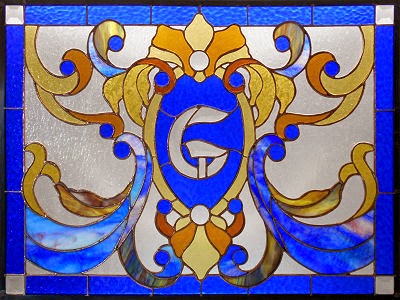 This is Lynn's last class with us as she's taking some time off to concentrate on other things that have been popping up in her life.  We'll miss her and will certainly be mentioning her in classes to come.

Ann has made more than a few of these hand mirrors in the past and they always turn out nice.  Carol took one look at this and immediately put it on her list of stained glass projects to make.  Ann has another one of these started in a completely different color scheme which we'll see soon enough. 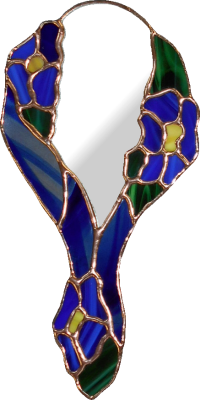 Shelley's Wine Window is nothing to whine about, that's for sure.  This is the quickest window Shelley has ever made and I think that the speed in which she accomplished it will go a long way towards bolstering her confidence.  Let's make a toast to Shelley's window, shall we? 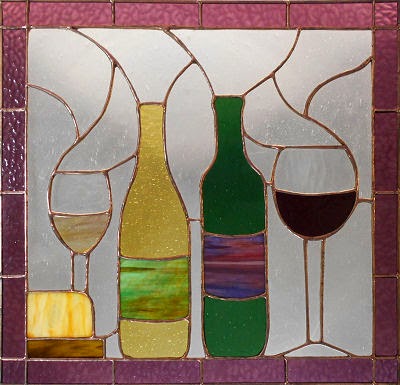 Bonnie's Triple Tiered Sunflowers are framed with a royal blue border that I think may be one of Bonnie's favorite colors.  The blue and the yellow offset each other perfectly and (as always) I like the way the flowers cut into the border pieces.  It may make things a little bit harder to square up, but isn't the end result worth it?

And I love these birds that Cindy made!  Cindy used clear glass in between the birds to make this project rock solid without the need to add a background color which would take away from the openness of the design.  Cindy did a great job on this one.

Jeanne's Beveled picture turned out exactly as we all thought it would-- perfect.  I was worried that the image on the bevel wouldn't show in the picture but it does.  That red water glass really catches your eye and draws your attention to the etching.  This project shows that Jeanne understands how to use color effectively. 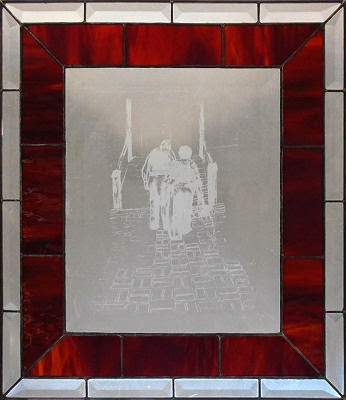 Terry's  Santa Face Window looks great.  She left the lead silver rather than doing it in black or copper, or did she?  If you look closely you can see that just the lead lines that form his glasses have been colored with black patina.  Terry carefully applied the patina with a q-tip and then took her time washing it off so the rest of the lead wouldn't turn black.  A very nice effect indeed. 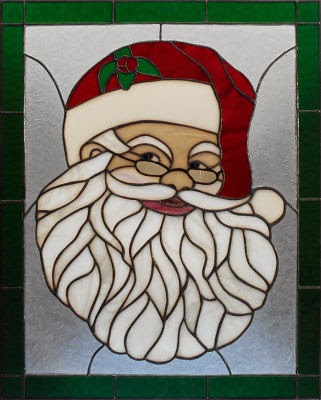 Brenda's 'H' Window is complete and ready to reside in a window that gets some sun light.  I like the font of the letter because it's made in one continuous stroke.  It's not only very elegant, it's very well made as well. 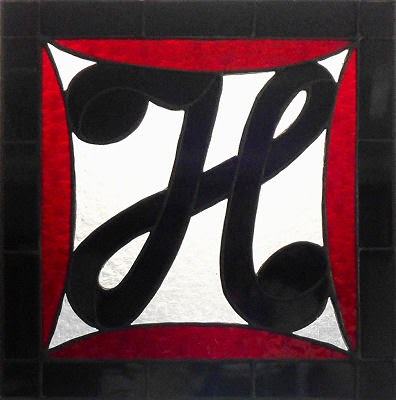 Carol's Birdhouse window is already looking great.  She's making this using the 'grind as you go' technique so what you see below can be foiled at any time.  With the rest of the pieces being essentially straight cuts I'd say the the worst of this is over.

Look at that detail!  That Isis already looks amazing and Martha hasn't even cut it out of glass yet!  And just look at the back end of that yellow Dragon fly with a ton of pins holding it down so it won't scurry out of position.  Great job, Martha! 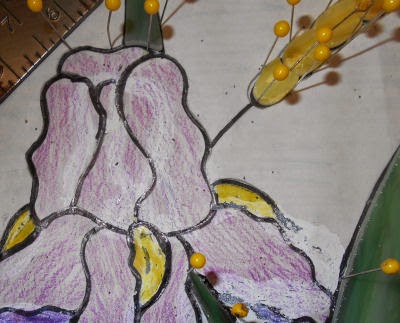 Myrt has the front side of her Transom Window completely soldered and there's no need for touching it up-- she's that good.  I think she'll solder the second side during her next class and then call this a finished project.

Although it's hard to tell, Susan's Traditional Geometric Window is all cut and tacked together.  That means that she'll be adding a zinc channel to the edges and soldering it when she comes back in.  I don't think the soldering process will take much time at all so I have a good feeling that Susan will finish this inside of two more classes. 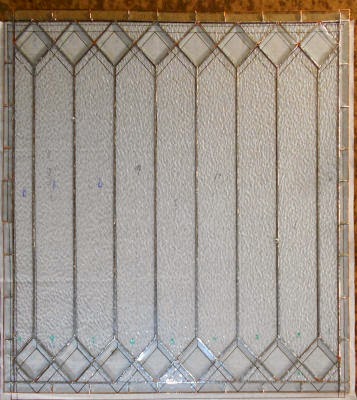 Cindy's newest project is a Pink Flamingo/Bird Of Paradise Window that she started working on this week.  It will be a large window--  exactly two feet wide by two feet high when it's completed.  And although it's not pictured below, the hardest cut in the entire window has already been made.  When I took the picture Cindy was grinding the pink head piece with the deep inside curve where the eye rests.  Knowing Cindy I suspect that she'll have this completed in no time at all. 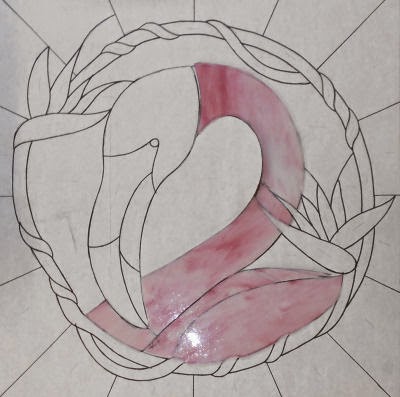 And that wraps up the year 2014.  it's hard to believe another year is almost over but it is.  But rather than look behind us I'm going to look ahead at the further adventures we'll be having in and out of our classes.  Happy New Year everyone!