We had another small set of classes this week due to the New Year Holiday but we still got a lot accomplished.  A surprising amount, in fact.  See for yourself.

Myrt has completed her three Transom Windows and don't they look like they're worth at least a million dollars?  Clear glass and bevels always look great together especially when they're accented with black lead.  The picture really doesn't do these three windows justice but it was the best I could do-- clear window are so hard to photograph especially if they have no hooks to hang them by (like these).

Our second completed  project is Ann's Purple Hand Mirror.  She's made so many of these in the past that she can knock them out quickly and efficiently.  This is her second hand mirror (of this batch) and it looks just as nice as the blue one she completed last week. 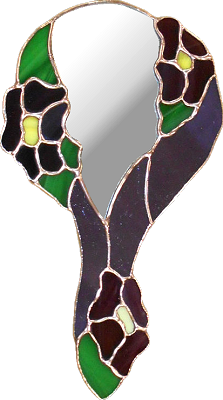 After Ann completed her Hand Mirror she began working on a new Fleur De Lis window using a purple, green and gold color scheme.  Although it's hard to see the colors without some back lighting, you can see that her FDL is well underway and only needs to be ground before she cuts her background glass.  Ann 's old pattern wasn't as symmetrical as she wanted it to be so this one was cut from a brand new pattern and is now perfect. 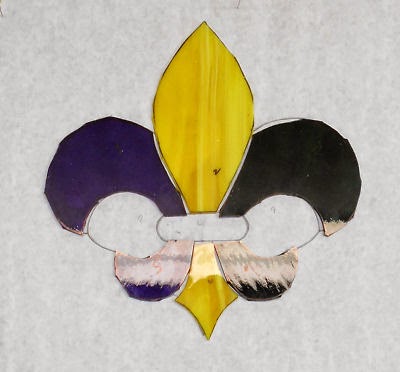 Becky S adjusted the inner border background to fit her Fancy Fleur De Lis this week.  The fact that it hangs in a diagonal orientation makes this design harder to cut out than you would anticipate.  But Becky has muscled through the 'issues' and has learned a lot along the way.  She'll be adding the final border to this piece when she returns in 2015. 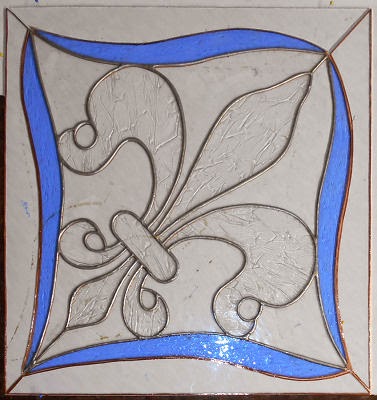 Martha's Iris Window likeness has been tuned into a postage stamp for 2015.  But you'd best buy them fast before the price of stamps go up rendering these 47 cent stamps obsolete.  In all seriousness though, it's looking great. 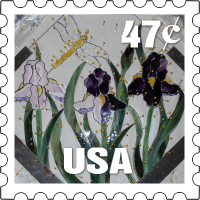 We also saw Brenda and Terry working on this Transom Window together and although there was a lot of fighting (and even a hair pulling incident) they agreed that it's turning out great and that they'll calm down and act more civilized from here on out.  They'll be making two of these along with a third longer version of the design the same way that Myrt made hers.

Carol's Birdhouse  is coming together rather quickly and just needs a background now.  She said she would try to wrap the pieces that she already has cut and ground so she can tack them together which will minimize piece movement as she continues with this wonderful window.

Jeanne worked on a Fleur De Lis Suncatcher made in a  gold clear textured glass known as Vecchio.  She's taken it home to wrap and all I can say is that this  is as good as finished. 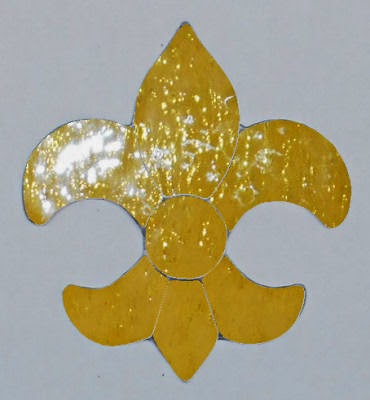 Well, Cindy surprised me  and came in with her Flamingo completely cut, ground, wrapped and tacked save for the background pieces that make up the sky behind the bird.  She came in, cut, ground wrapped and tacked the sky into place and then even got all of her window soldered.  After she left I attached a zinc channel to it which means that she'll be ready to color this when she comes back in.  That pretty much complete if you ask me! 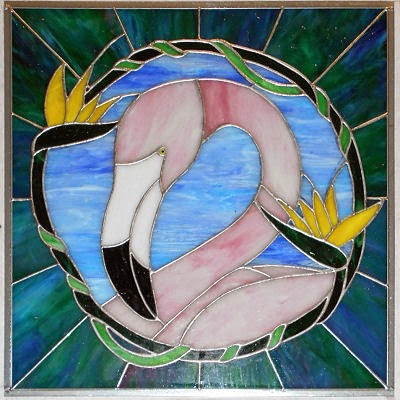 And as a late addition (sorry Susan), here's another window that is 100% soldered and ready to be bathed and colored.  Susan will be coloring the lead with a black patina so that the end effect will be a traditional look through and through.  It's a big window (approx. 3 foot by 3 foot) and it's even heavier than you might imagine! 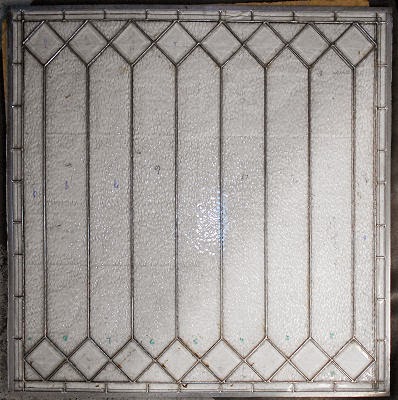 And that was how our last set of classes went for the year 2014. Next week we'll be back to our regular schedule with a complete set of five classes and even a new student. Have a great one, we look forward to seeing you all in a week!