She Can't Find Her Keys!

With the numerous amount of new students in our classes I've been noticing and old problem resurfacing.  Many people are confused by the term 'white glass' that we sometimes need to point out the difference between white and clear. In the picture below we have three images.  The one on the left is made entirely of clear glass.  There can sometimes be a whitish tint due to the amount of texture embossed onto the glass but there is no actual white coloration.  The scene in the middle consists of four different pieces of white glass. And on the right we see a combination of white glass (the bow) on clear glass (the box).

Calling clear glass 'white' can be confusing, especially when picking an actual white piece of glass for the same window.   Proper terminology will help you pick out the glass you need in our shop and in catalogs and online listings.

Well, I'm glad to get that out of the way because I can't wait to show you Martha's Octagonal Iris and Dragonfly Window which is officially complete. I'm just going to come right out and say that it's an exceptionally beautiful window.  The border glass is the perfect color to compliment the purple Irises, and the soft, demure green leaves are much more realistic than any deep, dark, flat green.  This completed window hadn't even been posted yet and two other people wanted the pattern! Paula's going to love this. 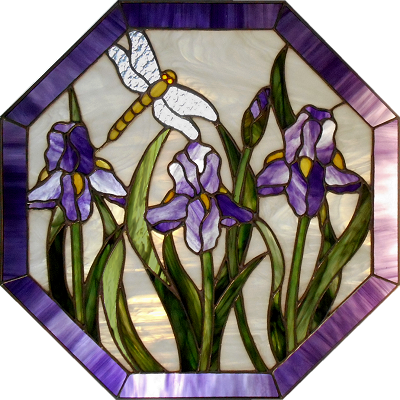 Janet's Peaches and Dragonfly Window already looked spectacular and then she went and gave it those curvy wire accents that really set the entire design off.  The spirals fill in blank spaces and give it a look you don't see very often in glass (since lead lines always need to connect on both ends).   Adding wire-work is a fun way to give your windows a little something extra that no one can ignore.  The colors Janet used in this design are bright and cheerful which will make it really stand out in her kitchen. It's just a shame that its size doesn't translate to the picture-- it's 3 feet wide! 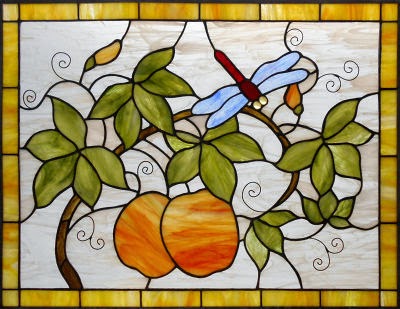 Carol's first circular window came out as round as you could ever hope.  There are no angles or unintentional straight lines anywhere on this Magnolia Window so I'm going to give her an A+ for her work on this.  Carol is ready to begin her next challenge and I know she'll handle it effortlessly.  Seriously though, isn't this window beautiful? 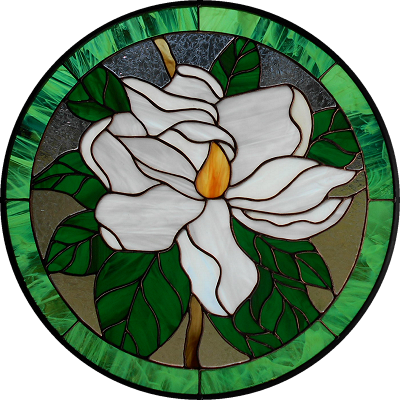 Sue finished her Autumn Window and I must say that for a first project with us her soldering is very nice.  She wasn't rushing so all this needed were a few touch ups rather than a complete re-soldering which meant that Sue got to take her window home as a completed project this week.  After it was finished she and Mary Grace worked on getting my four very filled pattern drawers into some sort of order.  We now have a "Flowers and Living Things" drawer to go with our "Fleur De Lis and LSU" drawer. 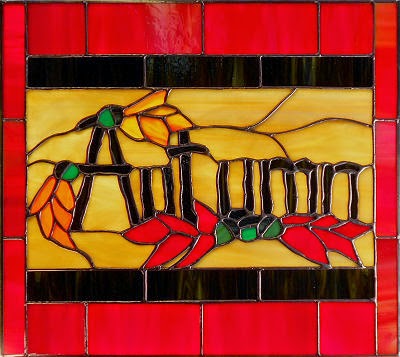 Natalie finished her Cross Window and her choice of colors gives it a distinct antique feel which is perfect for this design.  Natalie did a great job soldering this so I had very little to touch up work to do on it save for a few solder joints.  I always say that a window will actually solder itself if you just allow the solder to melt completely while applying it.  Natalie didn't rush but still managed to complete her soldering quickly because she didn't need to keep remelting solder over and over again to smooth it out.  What a great looking window. 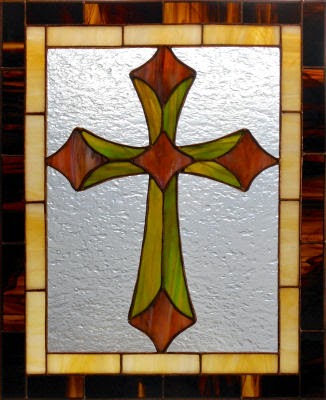 And our last completed piece of the week was made by Chuck, who took a Weekend Workshop with us last year and has really taken his knowledge and run with it over the past few months.  He made this window entirely on his own and it's as perfect a piece as any of our weekly students could have made.  Chuck always impresses me, and I'm not horsing around when I say that! Some of our students may remember him as the man who came bearing chocolates one night.  Great job! 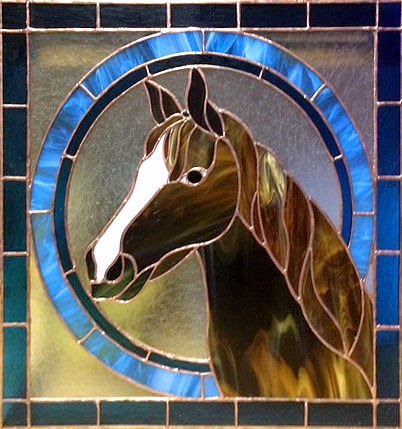 Jane's Rose Window is all cut out and just waiting to be soldered now.  She got her border and the zinc channel attached during class and took the whole kit and caboodle home with her to finish there.  I'm unsure if we'll see it again but I'm hoping I can get a completed picture because it's another impressive window measuring almost three feet across. 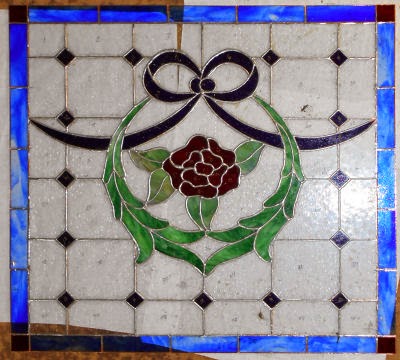 And Janet  began working on a pair of Hand Mirrors after she completed the work on her Peaches and Dragonfly Window.  With just the flowers left to cut out I'd say she'll be grinding these before you know it. 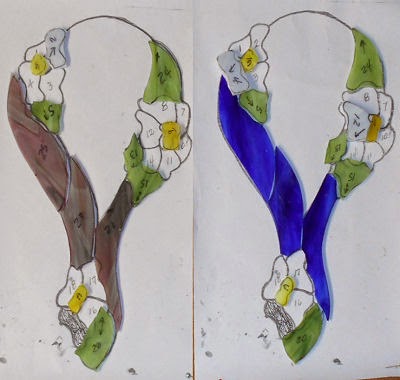 Mary Grace may have helped organize patterns this week but she also got all of her background pieces cut, ground, and wrapped for her Sunflower Window.  She's used a pale blue for her background (it looks brighter than it is only because it's resting on a white piece of paper) as opposed to the clear glass that all the others have been made in.  Me, I love the change.  Mary Grace is making this her own window and is all ready to add a border next week and begin soldering.

Gale came in and soldered a second butterfly suncatcher that she made while she was at home during the week and then resumed grinding on her Heron Window.  By the time class ended she had everything ground!  She's taken all of her pieces home with her so she can (possibly) have it foiled when she comes back in.  If that happens she'll easily tack this together and get her final border added.  Gale has caught on quickly, that's for sure.

Well look at that.  Jeannette's Geometric design is all cut out and she has started soldering the front side already!  The green glass that she used for her border came from windows that were removed from her church which really makes this project special for her.  She's taken it home so she can work on it there because Jeannette is ready to start a new project already! 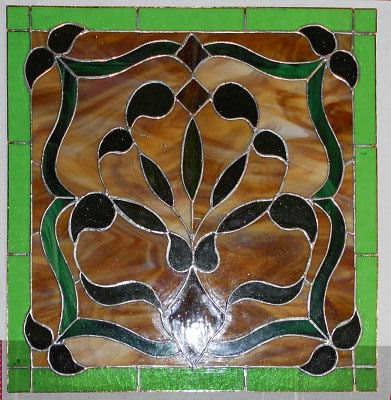 Susan 's doing a new window that measures a scant 10 inches by 10 inches but contains 55 pieces.  The hardest part of this panel will be stopping Susan from straightening it out and making things work too perfectly.   There IS the off chance that when this is complete it will be a perfect chess board. But the idea behind this is to have a somewhat crooked, unmatched fit.  With all of the glass cut I'd say Susan is off to a great, wobbly (in a good way) start. Linda's Yellow Rose is all assembled and has its zinc channel attached.  The rectangle you see surrounding the vase is only a cut out in the cardboard that we made so that the double layer of glass used in the vase can rest in the opening allowing the entire window to lay flat.  Linda has the front completely soldered and  is ready to flip this over and start the back side when she returns.

Becky S decided to start making this long Bamboo Window and managed to get her pattern all traced out and the Calla Lily portion of it cut out.  She was actually hoping to start her version of the Octagon Iris Window but someone else already took the pattern home to trace out!  Perhaps after this window is finished...

Shelley was sorting patterns along with Sue and Mary Grace while she was looking for this pattern of the Bird and Flower Window that she's made numerous time now.  With her background all cut out I'd say that she's almost to the point where she can cut this out from memory and not need pattern pieces at all.  Look for her to add some color to this window next week.

Terry also sorted through patterns, being unsure of what to make next, and then stumbled upon this Oval Iris Window.  I made it once about 10 years ago and it's always been a favorite of mine that's never seen the light of day again.  Terry managed to cut out all of of her paper pattern and then got her clear background glass cut out as well. I can't wait to see this window made again because it really is a pretty one and I suspect that many people will agree.

Natalie not only finished her cross, she also traced out her new window which (as you can see) is a crab.  There are a lot of pieces here but the cuts are all easy so I suspect that they'll go quickly. Since the pieces are relatively easy cuts I'm thinking this will be a great second project for her to help get her cutting skills fine tuned.

That about wraps things up.  We'll have a secondary post this week showing a few pictures of our last ('last' as in past) Glass Cruise.  We've already got one planned for next year so prepare to sail away with us in February of 2016.  It will be here before you know it!

Posted by Bayou Salé GlassWorks at 9:28 AM