I was hoping to get this out the door before we left on a week vacation but that just didn't happen.  So I now I'm writing the bulk of  this post (If not the entire thing) while we're driving back home from New Orleans.  It was a great week and I'll tell you all about it soon because five of our students went with us on the Carnival Dream.  But because of this vacation I'm relying on my memory to write about events that occurred two weeks ago.  Forgive me if I get some details wrong along the way.

Let's start with Cindy who completed her Anchor and Crab Window.  You have to love the blue glass that she used for water and appreciate how the color is darkest at the bottom and lightens as you head up toward the surface.  Doing it in reverse would have looked wrong and made the window appear top heavy.  It's this attention to detail that makes our students work look so great. 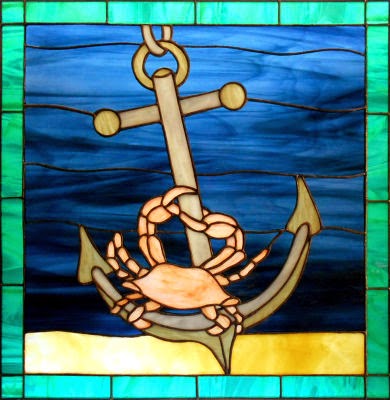 Carol completed her Birdhouse Window and it also looks great.  This pattern requires skills beyond a beginner level and Carol handled it with ease.  Any time a window requires extra work you can rest assured that it will turn out looking better than average because the more you put into a window, the more you get out of it.  Extra work always shines through. 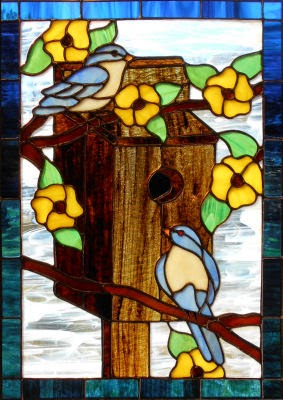 Terry completed her Clear Beveled Window this week and, as always, it's a keeper.  Bevels and clear glass are a wonderful mix and the only way you can screw up the combination is to put them together with bad cutting or soldering which Terry NEVER does.  It's simply another perfect window. 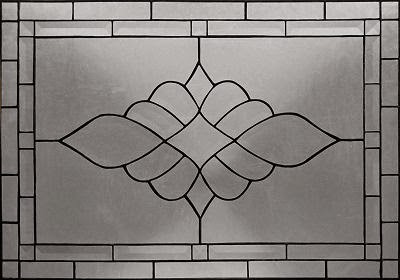 Brenda put the finishing touches on her beveled window as well and everything I said about her sister Terry's window applies to this as well.   The sand blasted background glass really makes the bevels stand out nicely.

Mary Grace completed her Deer Window just in under the wire.  She really wanted it finished this week and completed the soldering just as class was ending.  A quick bath and some copper patina rounded it all out to make the beautiful window that you see here. 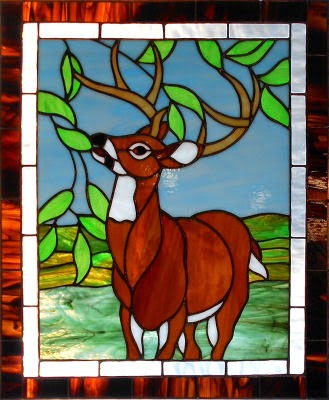 Becky S completed her Sunflower Window and the charcoal border is evrything I thought it would be.  When resting on paper it looked dark, but held up with some light behind it you end up with a very demure color change that doesn't blend into the background glass, but at the same time doesn't steal the focus from the  subject matter.  Perfection all the way around. 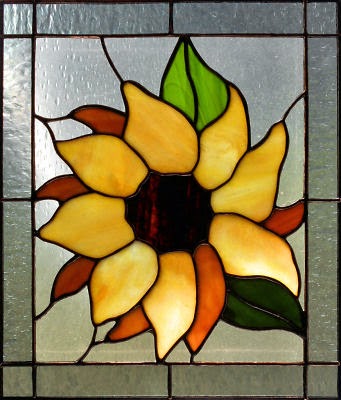 Next we have a Butterfly Suncatcher that was completed by Gale who we all know is our newest student because she made 'the' butterfly-- a dead give away that she's just starting classes with us. She had no problem at all completing this and I think she's got a keen eye for color all on her own so I'm expecting big things from her. 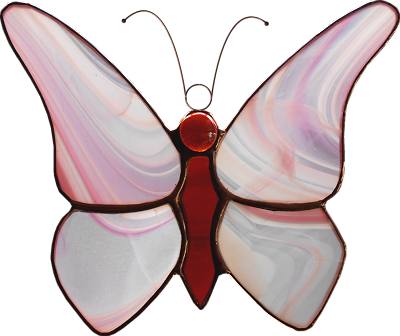 Betty's Trio of Angels are all cut out and looking spiffy!  She's used  two beautiful pieces of glass for her background and the angels themselves are nothing short of perfection. I can't wait to see this one lit up.  Betty is another student who finishes windows quickly and efficiently. 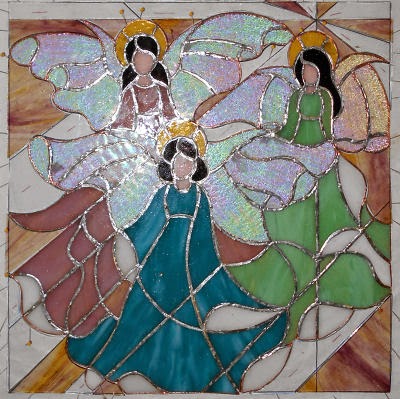 And Bonnie got all of her Large Owl Suncatcher  cut out and even has all of it ground.  There's no mistaking what it is and her cutting and grinding is flawless.  This won't take long to solder so look to see this project completed soon! 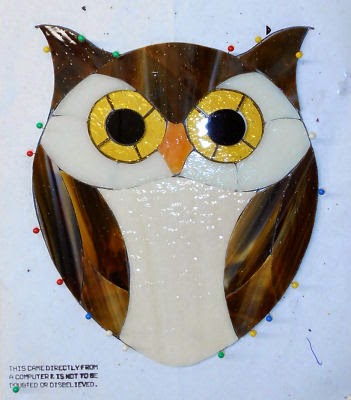 This is the project that Carol started on last week while she was at home. It's the round variation of the Magnolia Window that always looks so good when it's completed.  And Carol has a lot done on this already so we should see the finished project shortly. 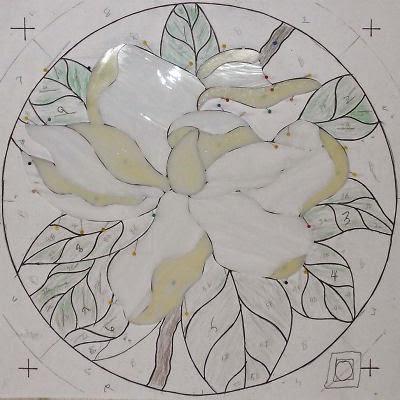 Once Cindy finished her Anchor and Crab Window she started working on this small round Fleur De Lis.  It's not nearly as big as you might suspect but Cindy has never been one to shy away from small pieces. 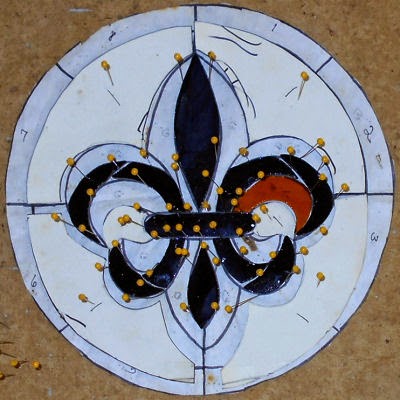 Jane has this 3D flower underway and it's lovely!  It's her own design which curves nicely, but she said that she's not likely to make another one due to the heavy use of the smaller 1/8th inch  grinding wheel to get all the tiny interlocking  curves cut into the glass. It's all ready to be soldered and then attached to its pole so look for a finished picture soon. 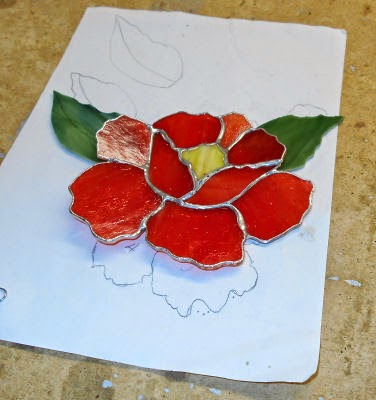 Janet is back and she's attacked her window with great gusto.  The border is cut and attached, her zinc channel is on and soldering is the only thing left to do on this before she gets to the fun part of her Peaches and Dragonfly Window--- the wire work!  It's actually VERY easy, it's just the tinning of the wire that can be trying since wire never wants to accept the lead.  My trick is to use short lengths and a lot of flux AFTER the wire has been scrubbed with some steel wool. 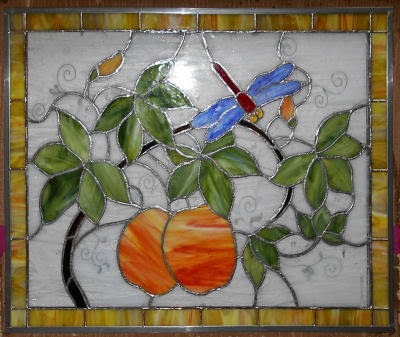 Ann is so close to having her Mardi Gras Fleur De Lis Window completed that it isn't even funny.   There is NO doubt that this will be featured next week as it's almost completely soldered now.    And wait until you see that cleat background light up. It's hard to see right now but the FDL and the border are all cut from green, gold, and purple glass. 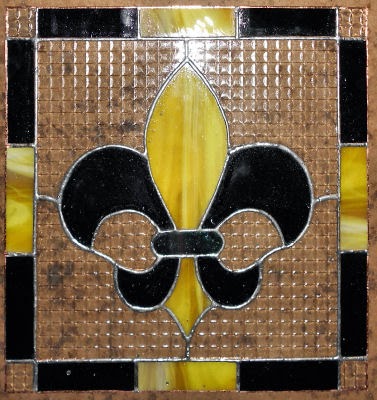 Linda L also made big strides with her Yellow Rose Window.  She cut two large pieces of clear glass to fit her background perfectly, traced out the rose,vase, and leaves on top of the clear glass, added the final straight lines and stems, and the cut it all apart within a half hour.  Everything fit so perfectly that she even got everything all ground as well.   She took the pieces home to foil so a beveled border will be added to this next week.

Sue continued working on her Autumn Window and is ready to apply the final coat of lead to it.  This will be hung as a flag in her front yard so I guess you can call it a large Lawn Ornament.  It will be finished before you know it and most likely be ready to hang when she comes back in. 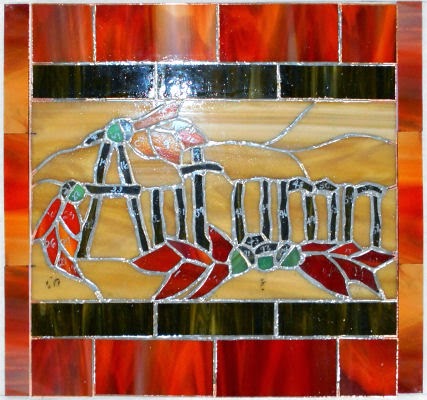 Martha now has all of her window cut out.  When she came in with her background all ground and wrapped I was thoroughly impressed.  I was sure she'd be grinding and wrapping during class but I thought it would be on her background pieces rather than the 8 pieces of border that she cut and ground instead.  Next week she'll get some brass channel on this and it will almost be finished. 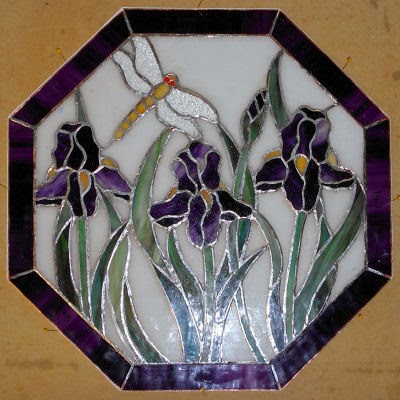 Linda F also impressed me with the progress that she made while she was at home during the week.  Her Wild Thing Woman is completely cut and ground and some of it is already wrapped!  Once this is tacked together she'll cut her background glass from the Wild Thing itself and be ready for a border.   I ran into one or two woman that reminded me of this one on the Carnival Dream last week. 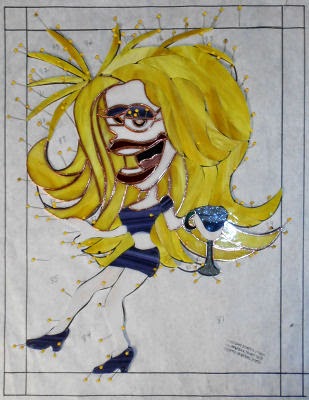 Jeannette has all of her background cut out and has begun grinding her glass.  She's got her colors pretty much worked out and I must say that the speed of her work on this window has greatly improved.  Her confidence level is high and it's showing in her work. 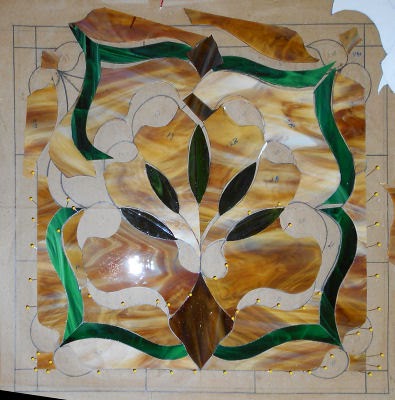 Myrt continued wrapping her outhouse and is ready to tack and start cutting her background scenery pieces. the wheel of the wheel barrel will be a fun section of the window.  I can't wait to  show her how easy it will be to provide the continuity that will sell the illusion of the wheel of her wheel barrow in glass.

Shelley's Cat Window is just about ready for a border.  It's all fitting together nicely and the hardest part from this point out is deciding what color her border should be.  With just four small pieces to wrap I suspect she'll easily get her border attached next week. 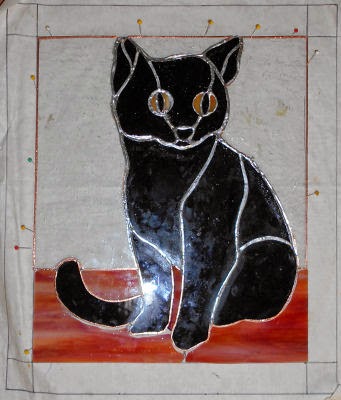 And speaking of borders, Natalie  got all of hers attached and even began soldering.  This is a scary thing for new students but Natalie has soldered a window before and she took my advice and moved slowly while soldering the front side of this Cross Window. Moving slowly is the key to good soldering as you can clearly see.  This will easily be completed upon her return. 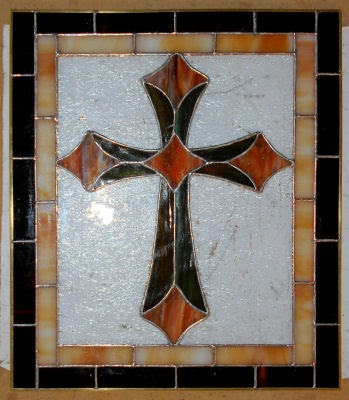 Terry not only finished her beveled window but continued working on this Octagonal Geometric Design as well.  With the lions share of the work done I doubt that it will be much longer before she adds her border and solders this. 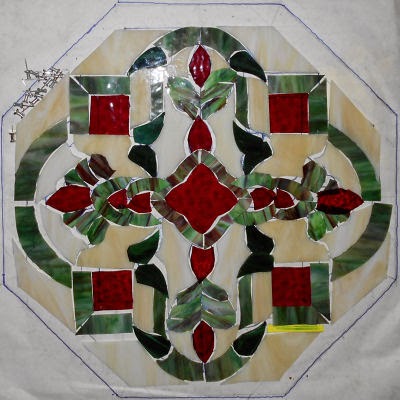 Paula came in with a huge amount of work done on her Mirror.  She's gone from making hand mirrors to making huge two foot by two foot mirrors.  She's got her Heron all cut and ground along with the leaves and her iris.  Before you know it she'll be ready to begin cutting the actual mirror once she has the three sections of subject matter tacked together.  She's a speed demon with a great eye for detail and perfection as you can easily see for yourself.

Next we look at Rowena who resumed work on her Butterfly and Grapes Window.  She says that she likes working on these larger sized grapes much better than she did the smaller ones that  made up her Grape Window a few projects back.  This is a window that will be looking for a background before you know it. 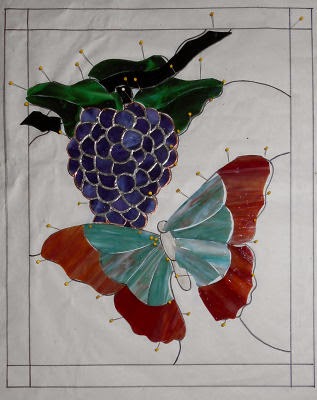 And Susan's cross window is near completion already.  This week she got her pieces all ground, wrapped, and tacked together which means that we'll add a channel to this and begin soldering when Susan returns.  She's truly knocking this window out in no time at all. (And I think someone already wants to use the pattern when she's finished with it.)

Gale started her butterfly last week and completed the soldering this week.  Once it was finished she started work on a Heron Window and got her pattern traced out, cut up and ready for action.  She got  few pieces of glass cut as well and is ready to make a major dent in this when she returns.  This is a perfect first project (and I'm not just saying that because I'm the one who drew it up.)  The cuts are just right for a new student.  I suspect we'll be recommending this to new students from here on out.

And this is Brenda's second window which is a twin to the completed window you saw at the start of this Blog Update.  With just the borders left to wrap and tack This is almost completed.

Lastly we have Jeanne who declined a photo this week.  I will tell you that she got either two  or three (my mind isn't working here!) Fleur De Lis Suncatchers cut out, ground and ready to be wrapped.  And she accomplished all of that work while using crutches to support herself  while she was grinding.  There's no stopping this woman!

Well, we have another Weekend Workshop coming up next weekend which means that we'll have two updates in a row in a somewhat rapid fire fashion. It's bound to be a busy week and by busy I mean productive.  I'll post all the pictures here so come on back soon.