Brought To You By The Number 9


Most students have trouble with their windows after they've wrap their pieces in copper foil and discover that things no longer fit together as they did before the foil was added.  This is because each piece is a little larger due to the foil.  The thickness of the foil may not seem like much but, like the pages in a book, they will add up to a very measurable difference especially when you realize that there are not one but TWO pieces of foil between every piece of glass.  I like a lot of wiggle room between my pieces but students are always afraid that they're going to have too much space and tend to grind too tightly.  Long ago I used a trick to space out my pieces that we're going to start using throughout of classes.  While grinding we will leave at least two pin between each piece of glass which will leave plenty of room for the copper foil that will be applied later on.  You'll see this being done in Linda F's Logo Window a little later in the blog.

Right now we're going to get our update under way by looking at the three completed windows that we have this week, starting with Brenda who finished work on her Magnolia Window.  Can you say 'perfect'?  Because that's what this is.  The double border matches the Magnolia flowers and branches beautifully.  How can you not love this? 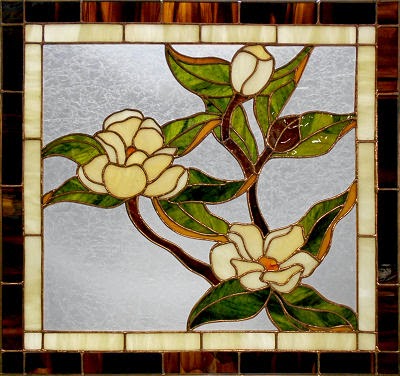 Terry's Egrets and Magnolias Window is stunning, but we've come to expect that from Terry.  Pay attention to the glass she used for the water because it's what really makes this window shine.  The blue glass has green mottled throughout which makes it look like you can see the leaves of the magnolias reflecting in the water.  Gorgeous! 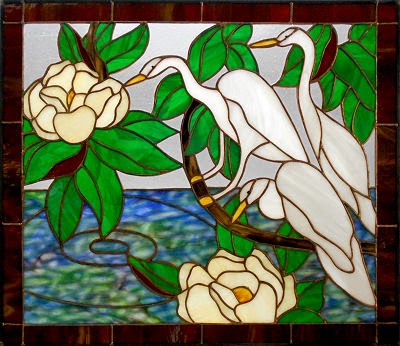 Susan made her second 3D Sunflower Lawn Ornament and she put this one together all on her own.  And as you can see there's not a flaw to be found in it.  It's darned near impossible to screw this project up while assembling the 3d section (unless you possibly drop it) because none of the angles are fixed.  You can always angle something somewhere a little more to make things fit better. 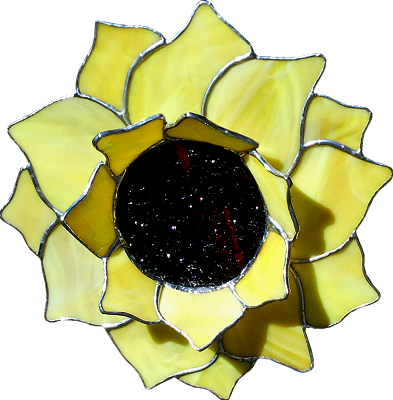 Becky S's Steer Head is just about complete now.  This week she added her border, filled in her missing piece, and soldered the front side after she put the brass channel on her window completely on her own.   I think that it's now official-- from beginning to end Becky no longer needs me to make a stained glass window. :-(

Bonnie's Angel is all cut and ground with one wing and her hair already wrapped.  Bonnie took this home with her so could could finish wrapping it during the week, but even if she doesn't get it completely foiled I have no doubt that this will be completed during her next class.

Gale's Military Tribute Window is almost completely cut out already.  I thought that as a new student this might take a little time for her to work through but the only thing left to cut is the purple heart which shouldn't take long at all.  Her work is impeccable and her color choice is spot on as well!  Wait until you see that helmet lit up.

Ann just has background left to go in her flower window because her flowers, leaves, and stems are all wrapped and tacked.  She's considering adding something to the right and left sides but she isn't quite sure.  Alas, I have an idea.... 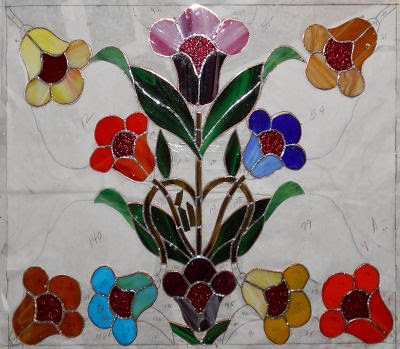 And Janet's Melon Window has its border and zinc channel attached.  For all intents and purposes it is ready to be soldered.  There's a missing lead line that she really wants to fix but we'll do that at the very end in a way that will probably knock the socks off Janet.  It's a solution that always leaves students saying, "You mean that's all there is to fixing that?" 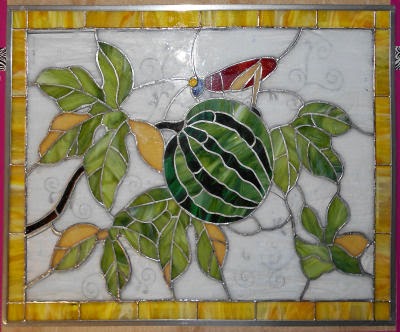 Linda F is making some major headway on her Logo Window.  Linda is one of MANY students who usually finds that she's ground things too tightly and then has to regrind pieces as she's wrapping her glass so that the project fits back together.  This week she's using  my old pin trick to make sure that there's an equal amount of space between each piece of glass that will allow for the foil without making her project grow.   All of those yellow dots that you see are pin heads and they're about to make Linda's life much easier. 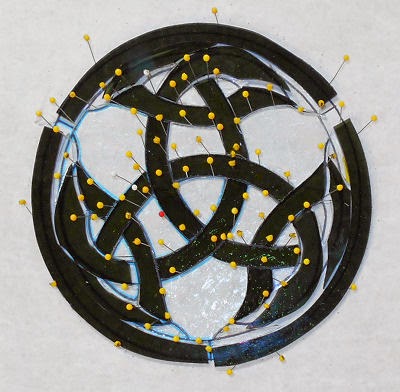 Meanwhile,  Linda L worked on two clear stained glass boxes complete with inscribed beveled lids.  She had made a bottom at home but wasn't happy with the amount of copper foil that was showing through the clear glass.  Once I told her how to help minimize it she decided to start from scratch and just cut out two more.  All she needs to do now is add the mirrored bottoms and then attach the tops.  Look to see these completed in our next update. 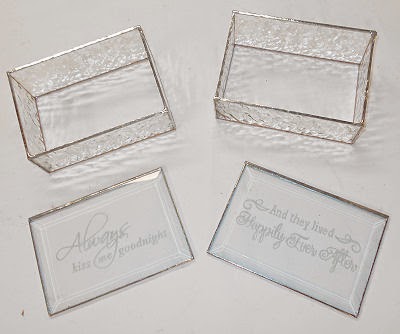 Martha is just about ready for a border with her Round Magnolia Window.  She only needs to grind a few clear background pieces and then she'll get her border attached.  It may be round but it's still easy.  The big question is, will Martha use yellow or green glass for her border? 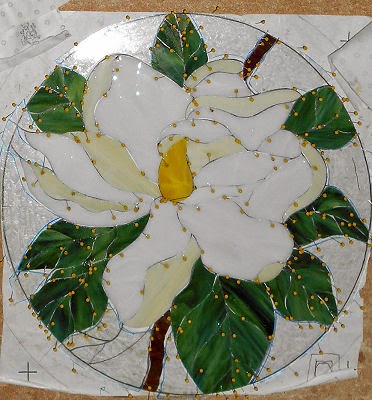 Mary Grace has her Fruit Bowl all cut out AND ground as well!  She's wasting no time at all on this project and if this gets wrapped quickly enough we'll easily see the six pieces of background glass get cut during her next class.  A double border looks great on this window and I suspect that's where Mary Grace will be leading this window to soon ehough. 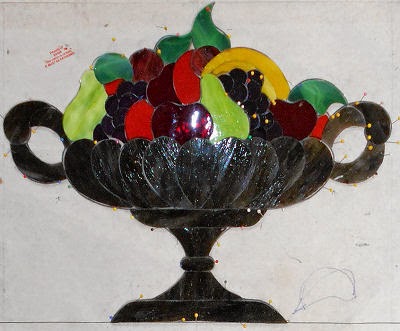 And Jeanne's Winnie the Pooh Window is ready for its border.  Once all of her foreground was tacked together she slipped a piece of blue glass under the finished portion of her window and then traced around everything that she'd already wrapped and tacked.  Once the blue glass was marked it was simple to cut out everything and get an almost perfect fit after a quick skim on the grinder.  I can't wait to see what color border Jeanne goes with. 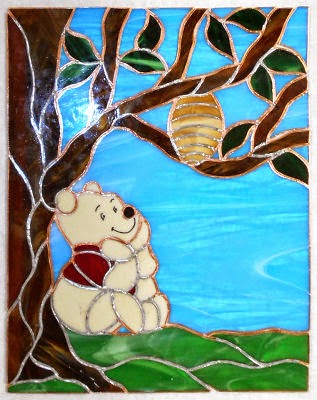 Rowena got all of the upper portion of her Baseball Window all cut and ground while she was in class. She has no problem working the grinder and when she walks away from it her pieces all fit beautifully.   She also managed to get the white background to her letters cut out and will grind them when she comes back in.  Just look at that glove!  This is really turning out nice. 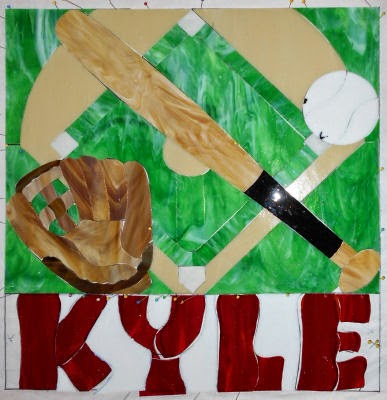 The shrubbery around Myrt's Outhouse Window is just about complete.  The rest will be child's play  because the hard part is officially in the past with this project.  I'm guessing that she'll have the ground completed when she comes back in.

Natalie's Crab Window looks fantastic.  There's a lot of detail in the body but Natalie just set her mind to it and finished grinding it in class.  She started wrapping it and before you know it she'll be cutting the background glass.  The extra work has really paid off with this design as you can already see.

Terry took a Beveled Cluster and  combined it with another pattern that she's seen someone do in class.  The end result is this stunning window that just needs three more borders (just twenty-four straight pieces) before it's complete.  And for the record, Terry has perfected the art of making symmetrical patterns. 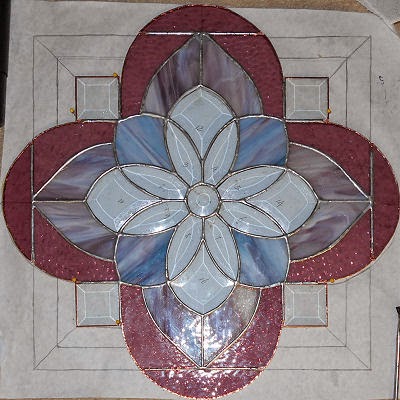 Poor Sue carpools to class and accidentally left her background glass in her car when she switched vehicles!  That didn't stop her from being productive though.  She still had enough scrap background glass left in her box of tools that she was able to continue working on all the small fill in pieces.  In the end, no time was wasted and this pair of windows is nearing completion.

Jane had only flower petals when she left last week and this week she has all of her glass cut.  In fact, the only thing left to do is wrap the border, attach it, and then solder the second side.  Octagon borders are a bit tricky but once you see how they are aligned they become very easy to do. 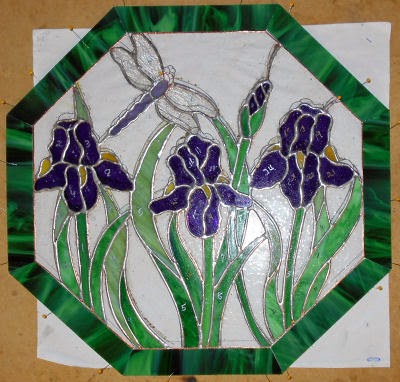 Cindy worked on a lamp repair this week which she'll wrap up during her next class.  This lamp is already stronger than it was when it was originally purchased and the repair work has shown Cindy why lamps can be purchased so cheaply at discount stores--- They aren't made correctly!  Not one of the pieces that Cindy removed was ground which explains why this lamp was so flimsy. 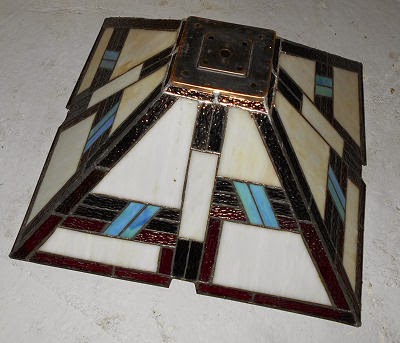 Somehow, even though I walked out to the car with Carol, I managed to forget to take a picture of her latest window.  The Fleur De Lis is all tacked together and the background has been cut out of a wispy white glass.  She'll be working on cutting out the 'SAINTS' text that will rest under this Fleur De Lis next. 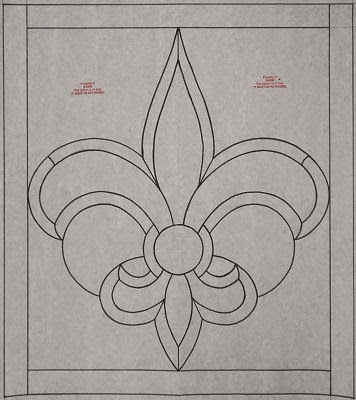 And that, as they say, is that!