Spread Them Out Closer Together


Applying flux is something that many stained glass makers don't think twice about but if you know how flux works you can make a few small changes that will make your soldering go easier.  Which brings us to this weeks tip.   Most people use a generic flux brush to apply their flux.  They tend to look like this: 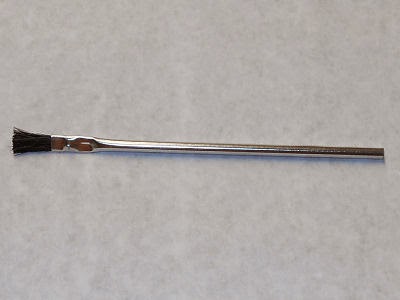 Although they are the best brush out there for the job I have a problem with them: their bristles are far too long to do anything other than a lackluster job.  Yes, they carry a lot of flux from the bottle to your project but that's not what we want to accomplish.  Flux is a mild acid that is used to clean the copper foil so the solder will stick to it.  If you have puddles of flux on your window you're doing it wrong.  Since flux is a cleaner you can help it do it's job better by 'scrubbing' it onto the foil.  This is something that you can't easily do with bristles that are long and floppy so I trim my bristles down to about a quarter of an inch in total length so they are good and firm.  I do this by holding the bristles of a new brush tightly between my thumb and index finger as shown below. Then just take a pair of sharp scissors and trim the bush along your thumb.  Holding the bristles ensures that you will have a straight even cut which is very important. 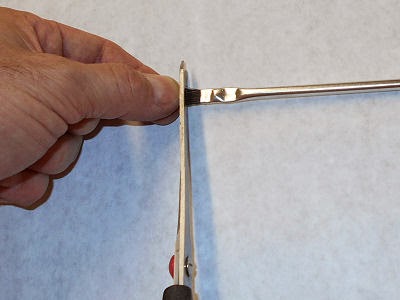 When you're finished you'll have a brush with short stubby bristles that won't flop about while you apply your flux.  This will allow you to use less flux and help the cleaner do its work by scrubbing as you go.  Use a back and forth motion with the brush pointing straight up and down rather than at an angle.  If your flux brush looks like the one pictures below then you're ahead of the game.  Remember to wipe off your flux brush each time you dip it in your flux bottle.  Too much flux will make your soldering go slower and cause sputtering, especially on the back side. 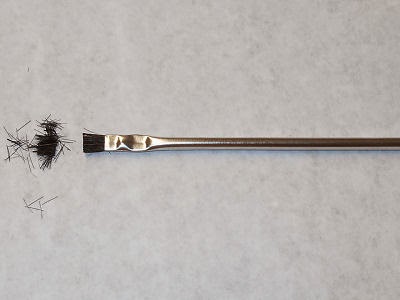 OK, so let's start by doing what we always do and look at the completed windows that our students made this week.  I have to give a tip of my hat to Carol whose Rose Window was finished quickly and precisely.  Carol thought that the rose pieces might have fit together a bit too tightly but I beg to differ because I can't find a single thing wrong with this window. 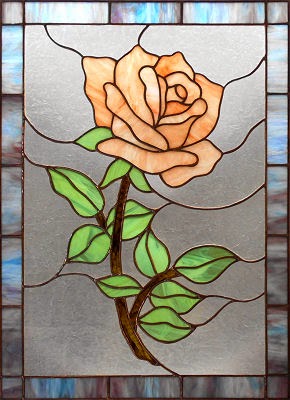 Bonnie's Victorian Angel turned out much better than I thought it would.  The black and white pattern was difficult to see just what was going on but now that we have some color I have to say I love it.  Bonnie was worried that the hair was too light and would blend in with the glass that she used for the flesh, but both she and I were both extremely happy with the finished results.   A little color and a little light make a BIG difference. 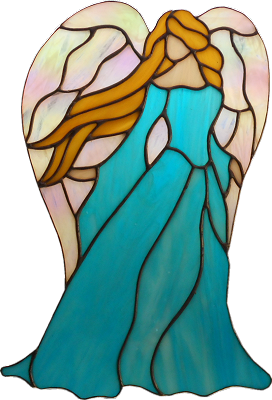 Becky S's Steer Window went quickly for her and I guess it's safe to say that she grabbed the Bull by the horns when making this window.  I was of no help at all in this project-- Becky did all the work herself.  And the word 'perfection' comes to mind yet again. 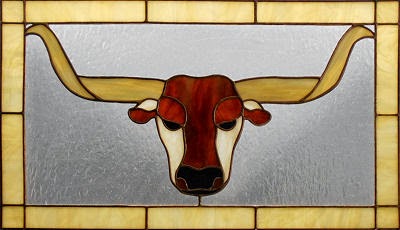 Jane's version of the Iris and Dragonfly Window is complete this week as well.  Three different greens were used making this and Jane went for just subtle differences between the three greens.  Stark, contrasting colors make for a harsh window and by using similar shades of green I feel that Jane hit the nail on the head for this project.  This is fast becoming a very popular pattern-- expect to see another one started next week. 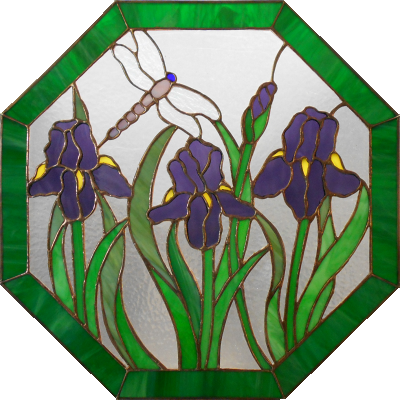 Linda L completed her pair of Clear Textured Boxes and they are so clean and sparkly that I couldn't get a very good picture of them.  The textured sides reflect in the mirrored box bottoms so much that the text on the tops are barely viable.  This is NOT the case when you see the actual boxes. (The flash on the camera didn't help matters).  I have to give Linda a lot of praise for these boxes because she assembled them all on her own. 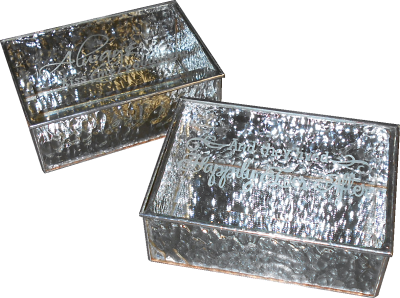 And that wraps things up with the completed projects this week.  But there's plenty more!  Carol's Saints Window is just about finished.  Her lettering is perfect and only the final border needs to be tacked on before she can begin soldering this piece.  Carol seems to have the art of  symmetry completely mastered. 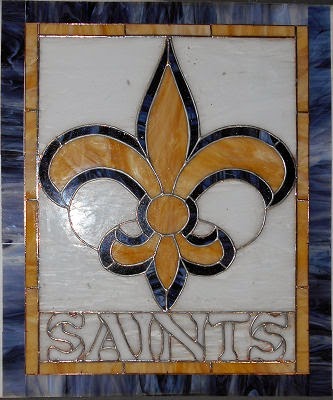 Look out world because Mary Grace has not one but two projects under way.  She cut out a Flag Lawn Ornament while she was at home and did a great job.  She brought it in hoping that it would get my A-OK before she wrapped it and I told her to take it home and wrap it because it's gorgeous.   Then she resumed work on foiling the pieces for her Fruit Bowl.  I think that by this time next week she'll get some background cut for it.

Linda L's Logo Suncatcher is ready for it's border.  I suggested that she tack the inner section together before grinding the final border because things tend to grow when you wrap them in foil, but since Linda kept pins between everything nothing grew at all.  That means that with just three pieces left to grind and a moderate amount of soldering to do I'll say that this gets completed when Linda comes back. 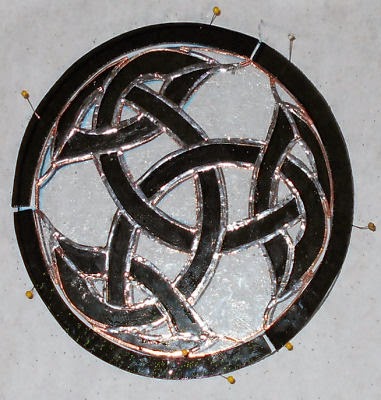 Cindy completed repairing the Stained Glass Lamp that she began last week and once that was done it was taken out to the car before I remembered to get a picture of it.  Next Cindy began work on her Tri-De-Lis Window.  Although there are only 8 pieces cut and ground I think it's safe to say that it's going to look spectacular when it's finished.  This is one of those windows where you'll get a good feel for its final look AS it's being worked on.  I can't wait to see this window completed because I think its going to be phenomenal! 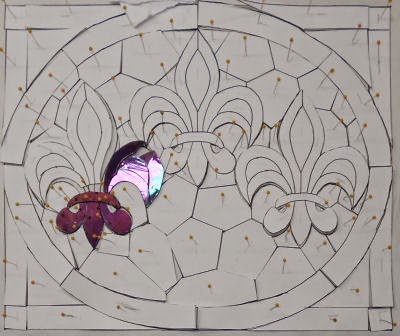 Gale's Memorial Window is...Wow!  She's been working at home on this and she already has it ground now.  There's a small section of red missing in the upper right that she may have left at home but even if we need to re-cut it that next week it will take only two minutes at the most.  I have to say that the rifle and that helmet look so real.  And it's not often you see stars in the blue section of a stained glass flag, but has has them in hers! 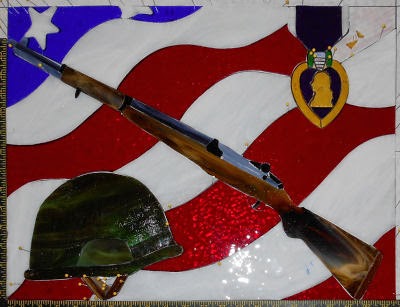 Which brings us to Mickey Mouse who I think is looking great.  I love cartoon windows because you can go all out with color and because the subject matter lends itself perfectly to the stained glass medium.  Jeannette's Mickey Window has some real depth because his foot is coming out of the bottom border. It's a simple effect that really gives him some life.  I can't believe how quickly Jeannette is flying through this project since she has less than a weeks worth of work on it.

Brenda's been busy with this black and gold Fleur De Lis Window.  She's another student who always seems to have a Fleur De Lis in the works.  Some students have signature windows and I think that Brenda's is the FDL.  But she certainly doesn't limit herself to them, and that's a good thing-- Brenda's diverse. 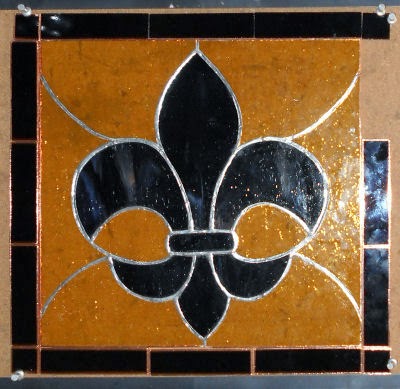 Linda L worked on her Wild Things Letters which she'll attach to the bottom portion of her Wild Woman Window.  I'm a little concerned about ending up with a lot of lead lines between the text to get everything to fit into the background but I'm sure Linda will make out just fine.  And I must say that the letters themselves look great.

Martha worked on both her Magnolia Window and this Cardinal And Flowers Suncatcher.  All of her background has been ground to fit in her Magnolia and her Cardinal is almost completely cut out.  You might think that the Cardinal has some grinding done on it already but that's just proof that Martha's cutting has come a long way.

And Winnie The Pooh has his border attached.  Jeanne looked high and low at colors and color combinations but red was really the only one that suited this window perfectly.  Jeanne was originally hoping for a yellow border and I thought it would be a good choice as well, until we saw different yellows next to the window-- then we changed out minds pretty quickly. She tried greens, blues, ambers, and browns in all sizes and combinations before finally settling on the only fitting color-- red.  And as you can see it was the best decision. 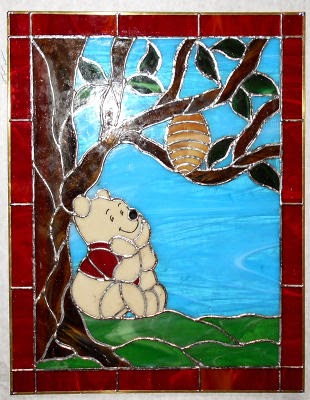 Then Shelly finished cutting out her latest Bird and Flower window and spent some quality time at the grinder.  With more than half of this project ground I suspect Shelly will be wrapping before you know it!

Ann's Flower window is really filling in now.  She's added two more flowers on the right and left side to fill out a large empty area and will be adding some leaves to make them look like they always belonged there.  Cutting the background for this is getting closer and closer. 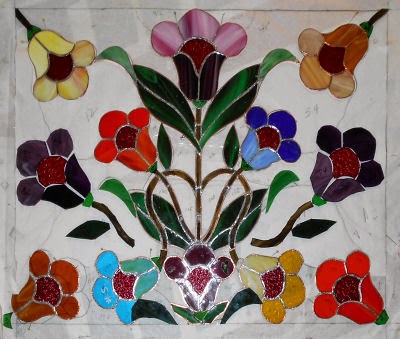 Terry's got two projects in the works, a Dueling Football Logo Window and a geometric design.  The latter got it's final border applied and now just needs to be wrapped and soldered.  The Football Logo's Window is already looking magnificent.  Balance is important in a window like this because if one side is a very simplistic and the second side is complex the window will look uneven.  But these work wonderfully together and Terry hasn't shied away from any of the tough cuts in it. 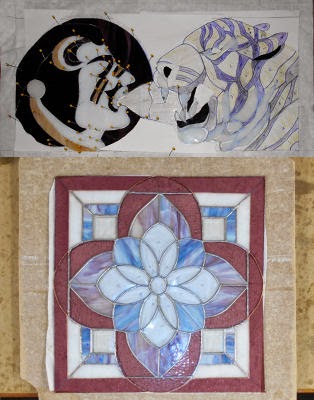 Sue has her two Featherized Windows almost completely assembled now.  There are just a few pieces left to go and then she'll be attaching her border pieces.  These are turning out very nice and I can't wait to see what she decides to use for her border glass.

We've had a lot of rain here lately but Myrt still managed to cut her grass.  And doesn't it look spectacular!  I need to make a mental note that this green makes the best grass possible (maybe I should actually write it down because my mental notes don't last very long).  I guess this means that sky and clouds will be up for cutting next and that's when this window will really look like a backyard scene.

And that's it.  We're late with this post, it's been a bust week and the rain has made our internet connection more than a little spotty.  But nothing stops our updates completely-- we just run a little late here and there.