One common problem we keep seeing occurs when someone starts a new roll of foil. What would be the lose end of the foil is secured with a two inch length of doubled sided tape (see B in the picture below).  A lot of times this tape is red and it's actually under the first wrap of foil.  To prevent the foil from coming off of it's backing a piece of clear tape is placed over it (see A in the picture below).  You should never wrap a piece of glass using foil that has either of these pieces of tape on them.  In fact, you should always throw the first full round length away on any new roll foil.  Solder will NOT stick to these taped sections of the foil!  I've had too many repairs to overcome this issue which has prompted me to post this as a Blog Tip. 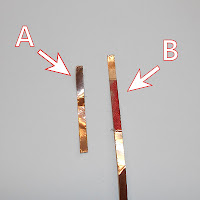 First up in our completed projects is Jeannette's Kevin the Minion who is another fun looking cartoon character window.  The mouth was painted on and  Jeannette used wires to form the thumbs of his hands so there's a little extra work involved in this window.  The end result is (expectedly) wonderful and Jeannette's soldering is really taking shape now. 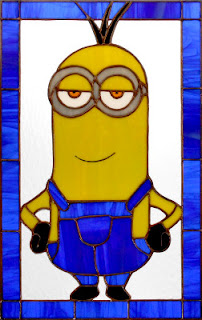 Terry's newest Tiger is certainly ferocious and has a wonderfully hidden cross in it.  It's easy to miss if you aren't looking for it and that may be the entire point in this subliminal window.  As always with Terry,  the work is top notch. 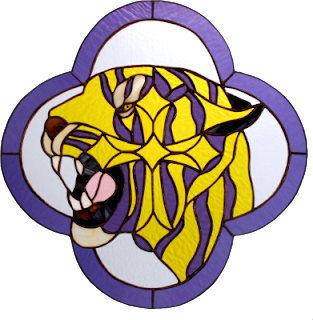 And Linda L made this wonderful keepsake all on her own while at home.  She sent me the picture so I'm sharing it with you.  She took some sand and some small shells from a beach in San Juan along with a small scrap of paper with the details of her vacation and sealed them in a container that she made from 3x3x3 triangle bevels.  The end result is perfection! 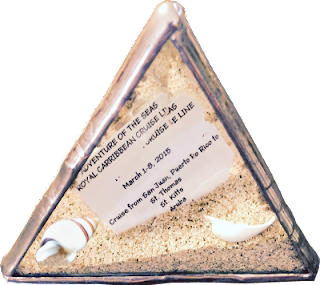 Sue's Tiger Claw LSU Window is really taking shape here.  She has most everything ground and wrapped save for the seven clear background pieces surrounding the LSU. I think she'll be adding borders to this one when she returns to class next week.  And when we add borders we tack them on one border at a time.

Brenda's Beveled Window is just two small pieces away from its border and then she'll be soldering this.  I'm going to make a prediction here, and that prediction is that Brenda will have all of the glass cut for this when you see it again.

Ann's working on the triple border of her latest Fleur De Lis Window and it's very near completion as well.  The corners are still going to be a little tricky but  I have no doubt that they'll be cut when Ann comes back in.  She has some wrapping left to do but Ann is a very fast foiler so that will go quickly enough. 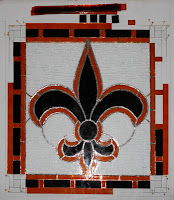 No, this doesn't say TOOT.  It's actually two beveled Crosses and two oval Bevel Suncatchers that Cindy completed this week.  You can't see the etched patterns in the ovals but hopefully we'll get a better picture of these when she makes a few more.

Vickie's Fruit Basket has 90% of its background cut out and it's reminded me of what a nice pattern this is.  I haven't seen this made since I was up in PA back in the 90's but I'm happy to see Vickie doing it now.  And not only is she doing it -- She's doing it beautifully! 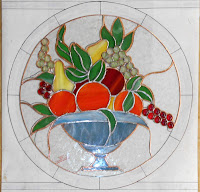 Rowena's certainly been busy.  She has an Oval Fleur De Lis ready for a background and border as well as a Butterfly Lawn Ornament ready to be attached to a stake! And she's been cutting away at other projects that we'll look at next week as well.

And Shelley not only re-cut the glass for her top fish (in MUCH better colors than it was originally cut out of) but she manages to begin foiling this window as well.  It's a large window  standing more than three feet in length.  This may be one of those windows that needs a double border and if so, I have an idea.

Becky S joined the two large sections of her Bird Of Paradise/Initial Window and managed to get the inner border cut as well.  Once that's tacked together she'll only have the final clear outer border to go and then she'll be soldering.  She was toying with the idea of using two clear borders but we all agreed that it needed something to separate the central picture section.  I think it's worked out perfectly 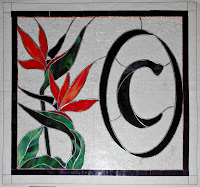 Gale started another Fleur De Lis Window and she's matching her first one piece by piece, color for color.  I always say that the second time you do something it always goes quicker and this window is proving to be no exception. 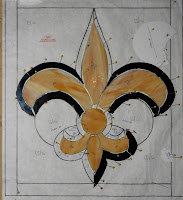 Carol is also matching a previous project and in this case it's her Magnolia Lamp.  She has another table in the same room that a second matching lamp would look great on and this week she got 2/3rds of the way through that second lamp.  She also made the small Fleur De Lis Window that you see next to her two lamp sections and decided to add a second border to it. Expect to see this completed shortly as well.

Linda F started this Humming Bird and Flower Window and is moving right along on it.  Although we've simplified the pattern a bit from the original there's still more than enough subject matter filling out the window.  And with just one night of cutting under her belt there isn't all that much left to go before she moves on to her background glass. 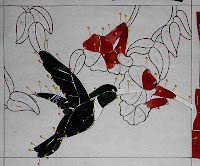 We have a three different students working on Pumpkin Lawn Ornaments and we're going to start by looking at Linda L's.  She's making 3 sets of these double pumpkins and she's got two of them pretty much under control here.  I suspect that we'll see her third pair next week.

This is Martha's first of two Angel Suncatchers and I've forgotten to mention that we switched up the pattern a bit.  The original design had the angel blowing a trumpet but Martha didn't want the horn so we just re-positioned the top wing to make it stable without the horn and Viola!  This is nearly wrapped now and will be ready to be soldered before you know it allowing Martha to begin wrapping this same angel but in another color. 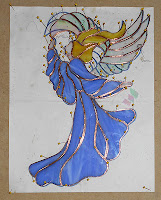 Bonnie now has the background glass attached to one of her Iris Panels and will get the second one cut, ground, foiled and attached when she comes back in.  She did the tougher one first so the second one will certainly be a breeze for her. 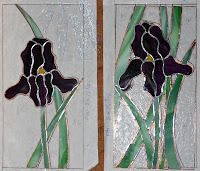 And Jeanne's Tiger is fitting together perfectly.  As you can see there's only the tail left to grind and I don't see that taking Jeanne any time at all.  Once that's completed she'll be able to start wrapping this and then tack it together.  And the background will be a piece of cake.

Natalie cut and ground a Dragonfly and now that it's all wrapped she's all set to solder this when she returns.  I think she said that she was going to make this a Lawn Ornament which means that we'll just add a stake to this when it's finished rather than hooks.  She plans on making more ornaments and I expect to see another one started when she comes back to class. 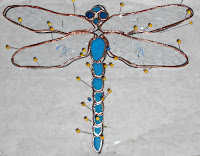 Here's another pair of pumpkins that were made by Mary Grace.  They were even soldered before the end of class MG is going to add a few leaves to these before she washes them and then impales them on a stake.  That gruesome act will occur next week for sure. 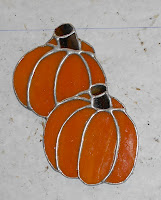 Myrt's Butterfly Window is nearing completion as all of her glass is cut. Everything is tacked together save for the border which will be done when she comes back in.  I have to say that Myrt's grinding abilities are through the roof as this window fits as perfectly as anything that I could ever do.  I think it's safe to say that Myrt has her act together even if she does stand us up for Garden Club meetings every now and then. 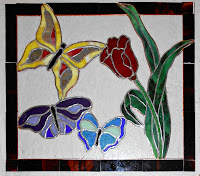 This border was a fun one to do because although there are only two layers to it, it's essentially a triple border.  It has the same entwining design as a triple border but the key difference is that some of the second and third border section have been joined.  This allows the entwining sections to stand out much better but it's just as complex to make as a three border window.  But as I always say, any extra work you put into a window will always show in the end.

Susan has Lawn Ornament Pumpkins of her own under way and although they are different patterns and sizes I couldn't pick one or the other as my favorite. Both are ground and that means that they'll only need  little foil before they can be tacked, soldered and then staked!

Susan has also begun working on her Tiger window as well and is doing it using the 'Completion Backwards Principle'.  She cut her background out first to be sure that she had enough glass to go with the color scheme that she has planned for this project.  Looking good!

And in the end we take a look at Terry's Fleur De Cross Window which is nearing completion as she only needs to attach the border before she can start soldering it. Both designs stand out prominently but they compliment one another perfectly.  And using the glass that forms the cross as the border is the perfect way to go on a window like this. 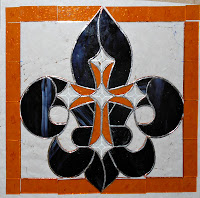 And there you have it.  The end of August is almost here which is why we're seeing so many pumpkins-- October is just a few weeks away!

Posted by Bayou Salé GlassWorks at 9:34 AM