Soap Is A Four Letter Word

Two students have mentioned something in the past few weeks that has prompted me to put this tip in the Blog.  There is no need to remove your normal grinding bit to use your 1/4 inch bit.  Swapping between bits is time consuming and (most times) unnecessary.  Simply loosen the set screw on your normal grinding head with the supplied allen wrench and push the standard head down until about 1/2 inch of the shaft is showing.  Tighten the screw and then put the small 1/4 inch bit top of your regular bit.  If you have to use the bottom section of the wheel on your regular head you may not be able to lower it far enough for the smaller pit to piggy back on it, but in most cases you can keep them both on your grinder to avoid swapping heads.  Just remember to always use a wet sponge against the small head while you are grinding glass of your 1/4 inch head will loose all of its grit quickly.  The illustration on the right shows about the proper height for piggybacking your two grinding heads.  Also, put a little plumbers grease in the set screw and in the opening on the flat spot of the shaft to prevent ground glass and water from accumulating.  It will make removal much, much easier. 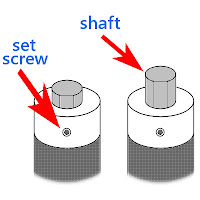 Terry's put the finishing touches on her combination Fleur De Lis and Cross Window.  Her choice of color for her border is perfect using the same glass she used for the cross which resides in the center of the window.  With the FDL cut from a wispy black the contrast is striking and allows for a separation of the cross and the border in a way that just clear background can't do. 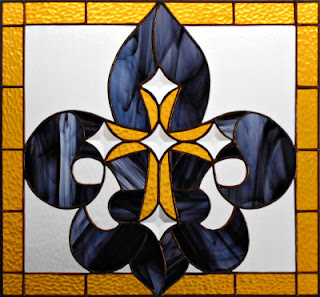 Betty finished her beveled window with an entwining border which was a little more difficult than she thought it might be.  It came out perfectly though and the thicker zinc channel she added for support matched the window even better than we'd hoped.  The problem with this design are the two straight lines that run the length of the window on both the the right and left sides.  These are weak areas so we used the thicker channel to overcome this weakness.  Sometimes the larger channel can drawn your attention away from the window and make it look clunky, but not in this case at all especially since Betty decided to leave this window silver. 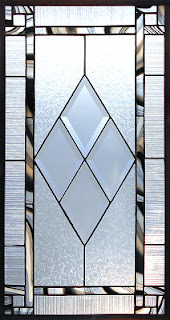 Martha has the first of her pair of large suncatcher Angels completed and it looks great.  She's attached two hooks to this (which are hidden in the picture) allowing her to angle the angel when it's hanging to whichever way looks best to her. 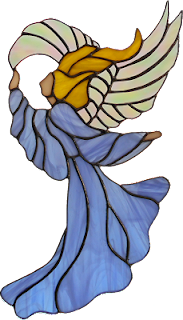 Mary Grace completed her version of a Double Pumpkin Lawn Ornament complete with twisted wires.  It's attached to its stake and ready to go in her yard.  She likes this so much that she's making a second one now. 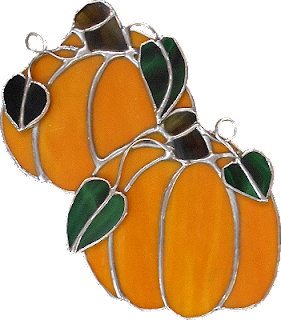 Paula made three 3D roses while she was at home during the week.  She wasn't happy with the angles of some of the petals so we removed a few pieces and re-positioned them creating a perfect rose.  Paula placed the petals in her peach rose in a very loose, airy manor consistent throughout the flower and I personally love the look. Another great job by Paula.

Here's a look at Gale's first 3D Rose.  I'm not sue if she plans on making any more of them but I do know one thing and that is that Gale has the art of putting a bead around the outer edge of her pieces down to a science.  And she did it pretty much from memory recalling how I did the edges of her butterfly that she made when she first got here months ago. 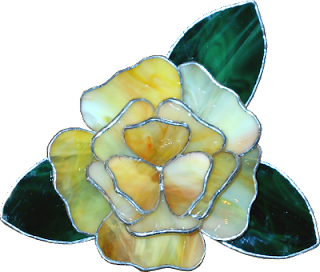 As you already know, Terry finished her Fleur De Cross Window this week AND she completed this mid sized Cardinal Window as well.  She certainly manages to keep busy and I can't wait to see what she comes in with next. 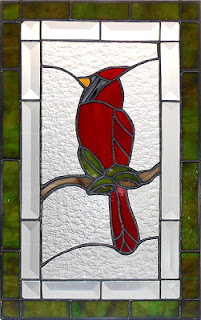 Rowena completed another  3D Butterfly and has one more at home that she wants to put together herself. She has the wire for the antennae and the channel to make the post so she should be all set now.  If it comes out half as good as this it will be beautiful. 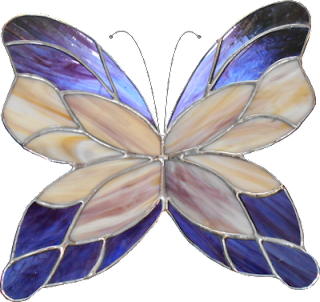 Linda F did a lot of cutting while she was at home during the week and now has all of the glass cut for her Hummingbird/Flower window.  She spend most of her class working at the grinder and when she left it was all fitted together.  There's even some foil on some of these pieces already! 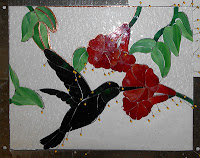 Betty also began working on two Santa Faces each measuring about 8 by 11.  She's grinding as she goes so there's good reason why those hats, holly and berries fit together so well.  She picked out the perfect color for Santa's Lips (which is always a tough color to choose) and I suspect the rest will fall together easily for her.

Bonnie got the background cut for her second Iris Panel and then put the brass channel around the edges as well.  She's tried them out in her frame and they fit like a glove even though I measured one upside down (whew!)  She's taken these home with her to solder so I'm sure that she'll have these completed when we next see them again. 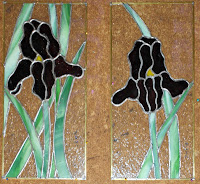 Brenda has everything cut and attached on her double  bevel window and when she comes back in she'll begin soldering it-- right after we add some brass channel that is.  Now that the window is centered on the pattern you can see how we spaced out the bevels from the original design to center them after we removed the inner border that I accidentally drew on the pattern.  But in the end it's worked out just as perfectly as if I had drawn the pattern correctly the first time.  Beveled windows rarely need a 'true' pattern because we just figure things out as we go from the finished measurement size.

And speaking of beveled windows,Charlie has pretty much completed his first Beveled Window.  All that's left to be done is a quick washing and then a quick go over with patina to color the lead.  He'll be starting his matching second window when he returns to class and we might even get a finished picture of this one should he decide to wash it when he returns.

Carol resumed work on her second Magnolia Lamp and managed to get it all tacked together.  She's even begun soldering it even though it doesn't have the correct cap attached. Her first lamp has a 3.5 inch cap and she had used the last cap we had on it.  We've ordered more but they weren't here in time for Carol's class so we just temporarily soldered a 3 inch cap into place to stop the top of the lamp from pushing in while she solders it.  Next week we'll pop it off and replace it with the correct cap. 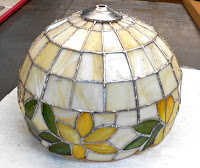 Gale is all ready to cut the background glass for her  Fleur De Lis window.  With all of the center FDL cut ground and wrapped we'll just cut a piece of clear glass to the size of the background and trace this out on top of it.  This will make the job so much easier than if she cut each piece out separately. 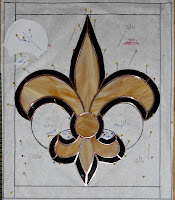 Becky S has both of her borders cut now with the inner purple border being attached.  She's taken the wider clear outer border  pieces home with her to wrap and will attach it when she comes back in.  However, that may be a few weeks from now since Becky is currently in Germany as you read this.  We hope you have a great vacation, Becky! 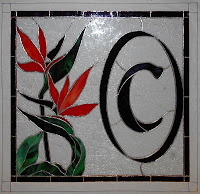 There's not much I can say about Jeanne's Tiger window other than the fact that she has it all ground now.  She's taken it home to wrap and plans on switching up the background of this design by making him walk on some ground rather than all being cut into the center of some background glass.  She may even use different colors for her background.  We'll find out for sure when she returns to class next week.

Vickie has her circular border cut ground and the glass she used really sets off the traditional look that the fruit gives to this window.   When you see this window lit up you're going to love it.  She only has 4 corner pieces left to go and then a final border so I think it's safe to say that the hard part of this window is far behind her now. 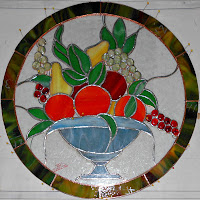 Shelley is making quick work of her Aquatic Window in the wrapping department.  There's not a lot left to go before she tacks this together and picks a color for her border. Now that I think of it I can honestly say that she's made short work of the entire project so far even though she doesn't think so.

Linda L has  all of the orange glass cut and ground for three pairs pumpkins.  She has the leaves cut as well and only needs to adjust the deep cuts on them before she can call them ready to be wrapped.  She's also opted to go with a tan/brown for the pumpkin stems rather than green and has picked out what I think may be the perfect glass for it. More on that next week.

Sue is down to one last border on her Tiger Claw/ LSU window so I'm expecting this to be ready for solder when she comes back into class.  I was especially impressed when she told me that one of the small pieces was too tight so she took the excess glass off of its neighboring piece so that the small piece wouldn't get lost in foil when she wrapped it.  Not many people think of that when they're grinding away at small pieces of glass.

And then we have Rowena who continued working  on her oval FDL.  She's  got the background cut, ground, wrapped and tacked and is about halfway done with grinding her border pieces.  After making this Rowena says  no more ovals.

Jeannette was going to start working on a nice Pigeon House window but ended up cutting out two 2 emergency 3D Butterfly Lawn Ornaments instead. By the end of class she had the first one all ground and ready to be wrapped and tacked together.  I suspect that will happen next week since she's taken the pieces home with her.  She'll be working on her pigeon window before you know it.

As I said earlier, Mary Grace liked her Pumpkins so much that she's begun working on another pair.  She even got it all cut and ground  in one class!  Now that's what I call progress. 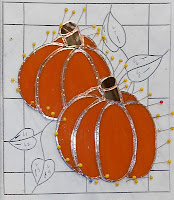 Natalia, who you might remember from out last stained glass workshop,  came in to visit and started working on the project that Charlie (her husband) will resume when he's completed his second Beveled Window that he'll start next week.  Natalia traced out the pattern onto poster board, cut it all up and got the pieces cut out of glass that you see below.  Not bad for only her third day in class! 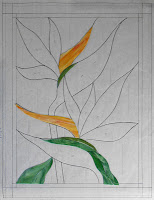 And Martha is about a third of the way through grinding her second Angel.  She's working her way from the bottom up leaving the tricky wing pieces for last.  THey slowed her down a bit on the forst one but she has experience with them now so I doubt that they'll cause her any trouble at all.  I think she's got the pattern down now.

And that's it for this week.  We'll have another post showing you what happened in our Fusing Workshop with Becky and Martha in just a few short days.