Color In Your Mind

We're running late with this post due to a show we did over the weekend so we'll have our tip on hiding lead lines in our next installment.  That's a promise.

So Cindy's LSU De Lis Window was completed this week and her triple border is a real eye catcher.  The subtle differences in the purples are what make this window stand out. 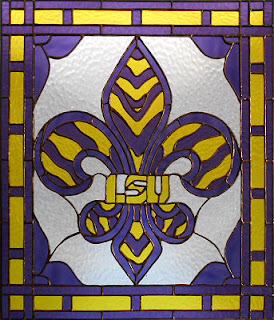 Then Betty completed her version of the same LSU De Lis as well.   The colors and borders are very different but the end effect is the same-- a very beautiful window. 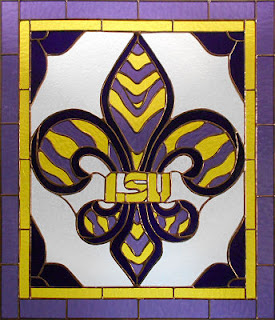 Tax season is over and Charlie is back!  And he's back in full force because not only did he complete his first large Bird Of Paradise Window but he tacked together his second one as well.   (You'll see the second window near the end of this post.) 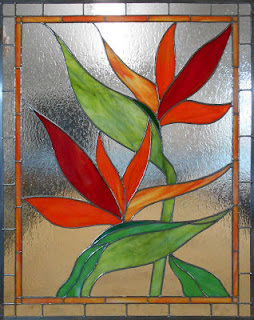 Carol made these two beautiful Cross Windows and although the colors are very similar the difference resides in the richness of the hue.  Me, I can't pick a favorite between them because they're both beautiful. Becky B resumed work on her Dragonfly and Irises Window and has almost all of the glass cut out now.  The background is a clear water glass so it's very hard to see here while it's one the the pattern but about half of it is completely ground already.   Becky's cutting skills have really grown, that's for sure. 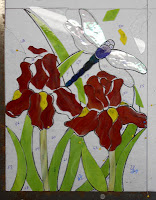 And speaking of cutting skills, let's look at Ann's latest project.  She cut this all out in one class and even began grinding it already.  She'll be moving along to her next project before you know it. 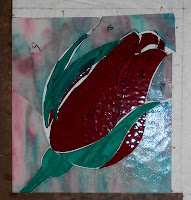 Brenda's Red Fish Window is getting all of its accessories cut out now that the Fish itself has been cut.  This week she worked on the leaves and next week she'll hadn't the water and sky.  Once they're completed Brenda will move on over to the grinder.

Wow, did Martha ever impress me when she came into class this week.  She had all of her Yellow Rose Window cut and by the time class ended she had the majority of it ground as well.  This looks to be a quick project for her and a really nice one as well. 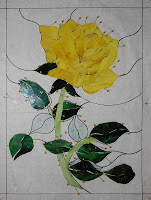 Susan R came in with all of her lamp panels ground and some of them were already wrapped.  By the time she left every panel was wrapped and two of them had been soldered together.  She's being very fastidious with this project and it's paying off in spades.  This is going to be together before you know it. 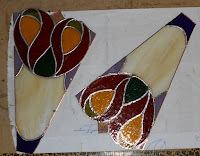 With the front side of her Peacock completely soldered and the back side halfway complete I think that Jeannette will finish soldering this when she comes back in.  Coloring this window will take some time so we won't see it completed next week but we will see it finished the following week.  This is a large project and Jeannette is doing an incredible job with it.

Jeanne's Mickey Mouse has all of it's glass cut and all she needs to do is wrap the border pieces and then tack them so she can start soldering this.  When that's completed we'll add a few pieces of wire to it to give it a more 'realistic' effect.  It looks great already but the wires will add so much more to this.

Becky S has nothing left but borders to cut on her second, larger Spiral Window.  There's a lot of clear glass involved but some of it will be covered with solder.  Before that happens Becky will need to completely cover those glass pieces with foil which she hopes to have completed before she returns. 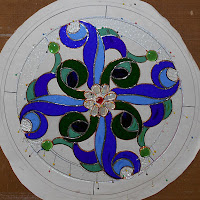 Mary Grace's Beach scene is undergoing a few alterations on the fly but now that she only has the sky and the water left to go I suspect that she'll be soldering this before you know it.  I already love the look of this window.

Betty is working on a detailed Pelican Window and is working on top of a colored pattern so seeing her progress will be about as difficult as spotting clear glass in a project.  You can see a few brown pieces in the feathers and that's what she completed this week.  I can only guess how much will be finished when she shows back up for glasses but I'm going to guess it will be a lot! 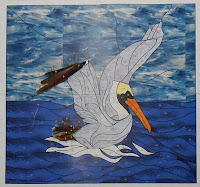 Linda L's second pair of Mickey Mouse faces are moving along wonderfully.  She's got one completely ground and the other is about halfway there.  Once all four faces are wrapped and tacked together Linda will cut the backgrounds and the borders for her four panels.  Her work is top notch and Mickey has never looked better.

Terry's second section of her Spiraling Flower Window is just all cut out and she has a good portion of it ground already.   Terry was smart and did the more intricate panel first leaving the easier of the two for last.  It may not sound like it would make much of a difference but it's the best way to work, trust me. 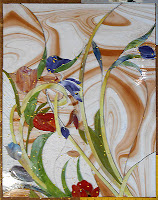 Myrt's Cardinal Window is all ready for its glass glob accent pieces.  On this one she'll attach them to the front of the panel but on the next two that she makes she'll cut them right into the leaves so they'll light up nice and evenly.

Rowena came in and attached the last two pieces to her Beveled Transom Window and then set upon the soldering process.  About an hour later she flipped the window over and completed the second side as well.  Next week she'll add the zinc channel to this and then wash and color it.  Consider this done!  (and when it's finished we'll be able to hold it up and get the entire window to fit into the picture.)

Sheri's another students who has been working with clear glass this week and she's now grinding all of her pieces.  She's got a good third of this window completed but she's a bit concerned about the point's in her pieces.  She'll soon see how points are something that you needn't worry too much about when it comes to working with glass.

Here's the second mirror image of Charlie's pair of Bird Of Paradise Windows.  The center flower and background section is tacked together so he'll start adding borders when he comes back in.  The rest of this window will be easy to do. 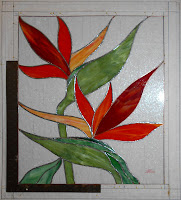 Susan D has another Butterfly almost completely ground.  Someone already asked me about the pattern for this but I can't remember who it was.  At any rate, Susan will be tacking her flower Cornucopia together quickly if she continues at this rate of speed. 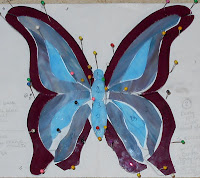 Cindy's been learning how to etching her own windows at home.  This is a Fleur De Lis that she worked on that she is now adding a double border to.  The key to all of these crazy angles is to keep your project pinned down tight or the borders just won't line up at all. 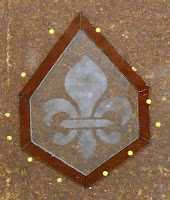 Here's a look at the pattern that Bonnie will start making when she return to class next week.  She's going for the more challenging circular window rather than squaring it off.  That extra work always makes for a nicer window as you will soon see. 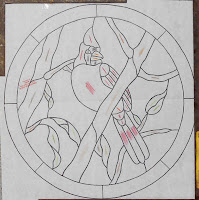 Linda F has another Butterfly Lawn ornament in the works and she's making short work of it for sure.  I have no doubt that she'll have this completed and something else started when we see her again. 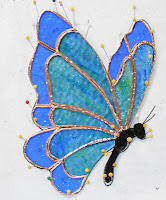 And lastly, Jeannette worked on this Sunflower Lawn Ornament while she was at home and what a great job she did on it.  She brought it in to get a stake attached to it and that was it. 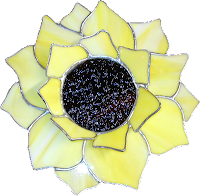 Don't forget to check back with us next week when we resume our lead line tips.  We'll be discussing how you can hide lead lines to give your window a more professional look.