This, That, and The Other Thing

Last week we looked at Jeanne's Completed Mickey Mouse Window and I had explained that she added wires to the finished window to give some of the solid pieces a more curved effect.  The thing is, unless you see the window before the wires were added and then afterward, you don't get to  appreciate what a difference the wires make.  So on the left you can see how the window looked  after she soldered it and washed it off.  Nothing to complain about there, huh?  But now look at the picture on the right and notice what a difference the wires make in Mickey's hands, boots and in the corner of his mouth.  Suddenly there's a depth to Mickey that wasn't there before.   As I always say, it's all about the little things. 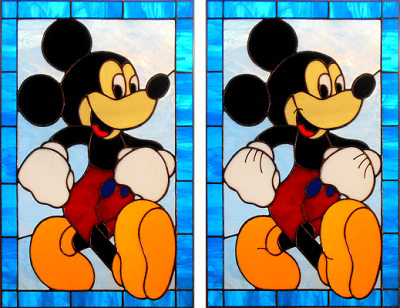 Okay then!  This week we saw Terry finish her Curved Transom Window and the baroque glass she used in it makes it look absolutely stunning.  Russ did as great a job curving the zinc channel to fit this large window as Terry did with the construction of it.  This window is what elegant is all about.  (Oh, and it IS all clear glass-- you're just seeing grass behind it.)

Barbara H is our newest student and this is our newest Butterfly.  She had no problems at all making this and I'm sure we'll see big things from her as the weeks progress. 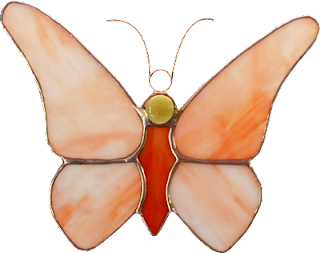 Betty has the sky all cut out for her Pelican Window and even got the orange inner border cut as well. The orange will act as an accent color which pulls from the pelican's beak while the final border will be made from the blue/green glass that she used in the water. 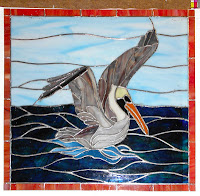 Becky B resumed grinding the pieces of her Iris and Dragonfly Window and it's really coming together now.  There are a few missing pieces that we're going to fill in once this gets tacked together although they're hard to spot in the picture below.  It's getting to be about time for Becky to consider what color she wants for her border. 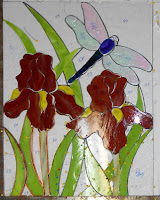 Carol is working on a window which looked so pathetic that I didn't want to take a picture of it and embarrass her in public here on this update!  Okay, the truth is that she sprinted out so fast that I wasn't able to get a picture of her work.  Do you know what that means?  That means that I get to post (and say) whatever I want.  Without further ado here's my mouse drawn, on the computer (using Microsoft Paint) interpretation of the window she's working on.  It's either a clump of Irises or the side view of an elephant.  This ought to teach her not to run out on me!

Rowena's got everything cut and ground for her Dragonfly window and although it's hard to make out where the lines will go I can guarantee that this will be stunning.  I'm leaning toward a double border (I always do) but we'll see what Rowena thinks.

Bonnie has all of her Circular Cardinal window ground and has begun wrapping all of the pieces in it.  The circle itself is is perfect so her final border will be a breeze.  The color of the beak on this Cardinal is nothing short of perfect--  It's practically life life. 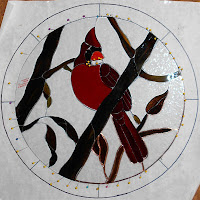 Brenda has her Red Fish almost completely ground now.  The importance of grinding off the line really came into play this week as she learned just how quickly and easily you can get a piece to fit into place without making multiple trips to the grinder. 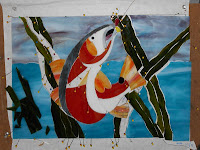 Ann was the only person to arrive in class Thursday and she made the most of it.  Her windows borders got cut, ground, and attached, then she got a brass channel around the edges followed by a completed solder job on the front of the window.  The border on the back side is already soldered so this is easily going to be finished when Ann comes back in. 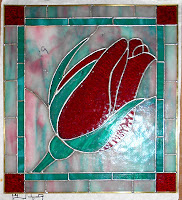 Jeannette's turned all of her attention to her newest Peacock Window and it's all ready to be soldered now.  Although this is much smaller than her last peacock it's just as pretty.

The pieces for Cindy's Birds On A Wire panel are currently  being wrapped and the colors in this one are spectacular.  This window is very similar to the peacocks that I enjoy making so much because you can really go crazy with color without having to worry about overdoing it.

Tasha came in with almost all of her Hand Mirror ground and set to work on completing the remaining pieces of that project.   Once everything fit into place she switched over to grinding her Fleur De Lis Window which she also got completely ground.  She's taken all of her pieces home with her to wrap so that she can begin soldering these when she returns next week.

Mary Grace filled in the missing piece of her water while she was at home and then got her borders cut while she was in class.  The thin inner border is the perfect accent color for this window and her final border compliments the color of  the leaves in her palm trees without being a perfect match.

Martha has all of her glass cut, ground, and tacked together  in her Yellow Rose Of Texas Window.  She's going to soldering this and finish it all up next week  which means that she'll have this completed in time for the deadline that she had for this project.  She avoided the common pitfall of waiting until the last minute on this which is a good thing. 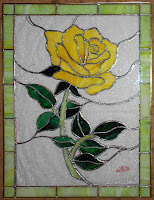 Linda L has all four sides of her Mickey Mouse Lamp tacked together AND soldered.  Next week she'll tack the four panels together along the edges, add a cap to the top and then this Mickey Mouse will be completed.

Charlie got all of his second Bird of Paradise Window tacked together and then began soldering this beast.  He has the front side all soldered and will begin the back side when he comes in again.  With a little luck he MAY finish this during his next class.  I originally said he wouldn't but I had forgotten that he's leaving the lead silver on this which means that we get to skip two long, drawn out cleaning processes.  Let's keep our fingers crossed in the hopes that Charlie gets to take this home with him next week. 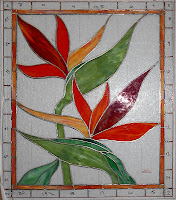 Shelley worked on her Duck Head window but had issues with the background glass.  She broke a piece and then I broke one as well.  Since there is no more of this glass available we're going to have to think outside the box on this design to make up for our shortages.  I believe that the best thing to do is leave the inside of the head iridized while the surrounding glass can be cut from the same pattern (Krinkle) without the iridized sheen to it.  Shelly is also worked on a Dragonfly which is looking good!  She's used the broken krinkle iridized glass for the dragonfly's wings.  Waste not want not!

Terry also resumed work on the top panel of her Spiraling Flowers window.  She's got the majority of it ground and will begin wrapping and tacking this together very soon now. 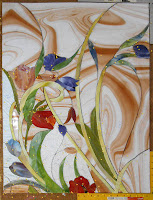 Susan D worked on the last bug for her Flower Cornucopia window.  With just leaves left to go, Susan asked if she could cut out more of them than the pattern called for to help make it more full.  Of course the answer is 'YES!' because the more pieces there are the more sturdier this project will become. And as we all know, more is never enough. 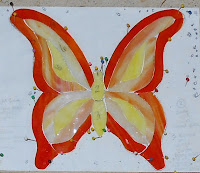 Susan R  was busy working on another Butterfly as well as a Dragonfly this week.  I think we'll see these three bugs completed when she returns because she really knows how to knock these sucker out!

Jeanne is beginning her Tiger Face Fleur De Lis Window and she'll be using the same lead technique that Becky S has been using in her spiral windows.  This tiger is going to be unlike any other stained glass tiger you've ever seen before.   Me, I think it's going to be stunning. 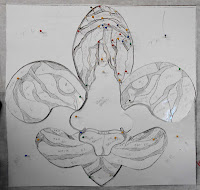 And during class this week we discovered that Myrt was at the Garden Club rather than with us so we lose again.  :-(  No Cardinal for her!