Fishing For The Blues

Our tip this week is very easy indeed but something that many students never think about.   When cutting out your glass pieces remember to use the ILS method of cutting.

Inside curves get cut first,

Cutting in this order provides strength for both your curves and the longer cuts.  Cutting in any other order usually results in broken pieces.

Well then, Patrice certainly followed those rules when cutting her glass because you can see she has a few inside curves in this window that are certainly intact.   Her Houston Texans Window is certainly unmistakable.   She did wonderful work on this Logo and is fast becoming a student whose projects are discussed throughout other class. 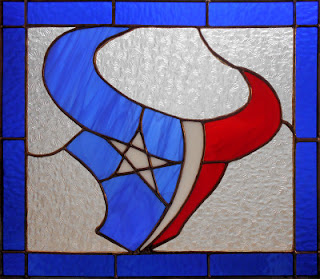 I have some good news and bad news here:  The good news is that Carol fixed the tree that she was working on last week.   The bad news is that we don't have a picture for it but I have no doubt that it turned out spectacular just as her two guitars suncatchers!  As you can see she has both a right and a left handed guitar. 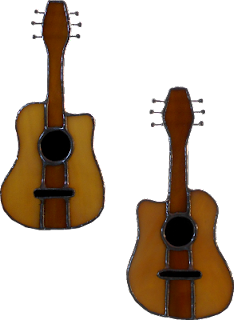 Mary Grace finished up work on a large Cardinal Lawn Ornament as well as an Ocean Sunset Scene.   She gets extra points for starting and finishing the Ocean suncatcher in just one class! 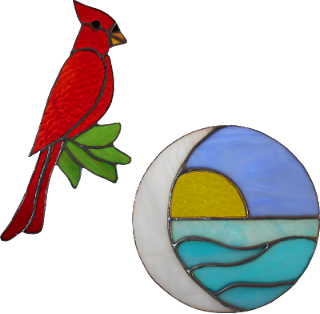 Here's a window that I made this week as an order for a customer out in Baton Rouge.  She wanted Daffodils and and a deep purple Iris and that's what we have here.  I must say that I really do like the design and it's actually smaller than you might think it is when looking at the picture.  It's only a tad bit bigger than a piece of paper. 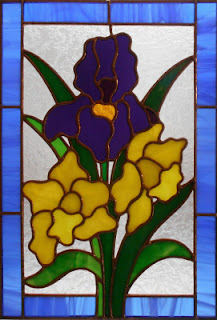 Here's a look at two more beautiful Mary and Child Suncatchers that Betty made this week.   We also see that she's made a Mary, Joseph, and Jesus Suncatcher that we've never seen before as well.   I think this one will be very popular around Christmas next year. 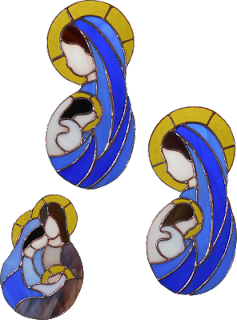 Here we see that Jeannette has completed two more pairs of Mickey/Minnie Mice Suncatchers.  They're the perfect gift for any Mousketeer! 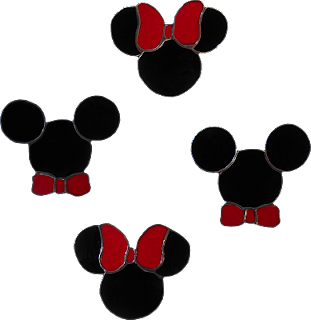 Cindy finished two more of her Clear Textured Cross Suncatchers, one in all clear glass and the second using iridescent glass. 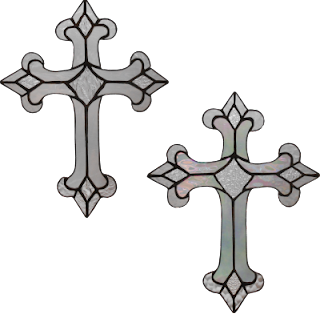 Linda F finished her Modern Cross Suncatcher which has become a very popular piece here in our classes.   As always with Linda, this is a job well done. 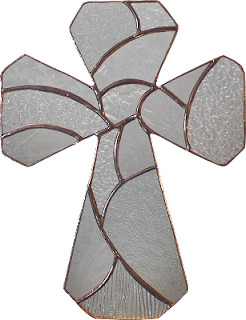 Susan D finished working on her newest 3D Humming Bird and another Dragonfly Suncatcher as well.  I think she has the process for making these down for sure! 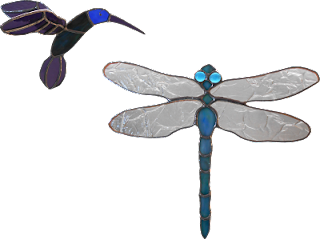 Angie's newest Stylized Fleur De Lis is all tacked together and ready for solder.   I'm sure it will be ready for its final picture when Angie brings it back in next week. 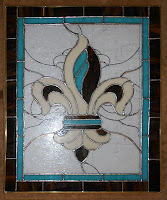 Betty also worked on this festive Holiday Angel Window which is just about ready for its border(s).   She was originally talking about doing a triple border but I think that's a bit of overkill on a window this small.   Triple borders are very nice but you never want the border to overpower the subject of the window.  In other words, it takes a large window to be able to handle a triple border.

Brenda added more pieces of hair to her Salon Window and even has all of the woman's face cut out so she's making some really good progress on this.   You can tell that there's some Stylist's Blood in Brenda's veins because she's changed some of the coloring in the hair for a more aesthetically pleasing look. 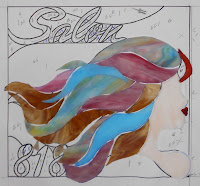 Terry almost has three of the six panels in her Christmas Panel Lamp ground.   I was sure she'd fly through this project and it looks as though I'll be correct on that.  There are 39 pieces in each panel which means that the entire lamp contains 240 pieces!  If you're doing the math at home you're probably coming up with six pieces less than I did but I'm including the crown that will top this off.

Lara got the first of her pair of cabinet doors all tacked together and ready for solder.   She plans on soldering this one at home because she really wants to see the pair finished and installed in time for Christmas.   She's got the center of her second panel all cut and ground which tells me that she'll surely get them done in time.  Ho Ho Ho!   We'll see one of them installed when we return next week.

Sheri  started  a new project by  tracing out the pattern for a peony window, drawing grain lines, and assigning colors to the pattern.  Then she got all of the glass cut out as well.  Nice job!  She'll be adding additional cuts to her glass once everything fits together after she grinds what you see here.  This is will ensure perfectly joined lead lines where things criss cross.

Patrice also worked on her Ragin' Cajuns Window and has a great deal of it completed just one week into it.   Her attention to detail is what makes her work really stand out in the crowd. 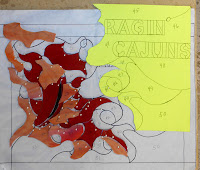 Linda F also worked on this Flowerpot Suncatcher which has a HUGE PSI value (Pieces per Square Inch).   What really makes this so difficult isn't the number of pieces in it so much as the size of all of those pieces!   This is only 7 inches wide so take anther look at it and marvel at Linda's patience. 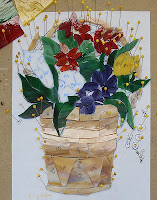 Susan R got a lot more cut out for her 1920's Woman and what we're going to do is completely skip the lips in this, grind everything until it fits together, and then cut out two lips.  When the lips have been cut out she can grind them until they look just right and then Susan will  trace around them and cut them into place.

Shelley began work on a Dragonfly Window and she spent her class time prepping the pattern with color and grain lines.   People don't realize how much work has to be done before you even cut one piece of glass.  After she finished that she cut up her paper pattern pieces and began cutting her actual glass as well. 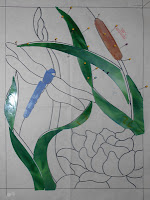 Carol also worked on a few of these Christmas Santa Hat Suncatchers as well.   She's a regular Christmas ornament machine! 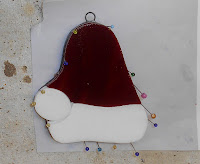 Barbara got all of the glass cut out for her Santa Claus Window and will begin grinding it next.  She's taken it home to possibly get some work done on it between classes but with Christmas being just around the corner it's hard to say if that will happen or not.  We'll see when she returns next week.  Either way, grinding WILL be started on this when you see it again. 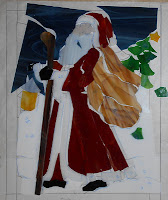 Roy made major progress on his Texas A&M Window and has a unique and effective way of transporting it without having the pieces slide all around.  When Roy packs up he uses painter's tape to secure his pieces to his work board.   The tape  is sticky enough to hold things down but it's easily removed when he wants to work on his project again. 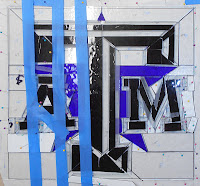 Becky B's Magnolia is coming together.  She wanted to begin grinding what she has cut out but as I always tell people, that leaves no margin for error on any pieces that you haven't cut yet.   If your cutting is 100% spot on or you don't mind gaps in your windows, then don't grind until everything has been cut. 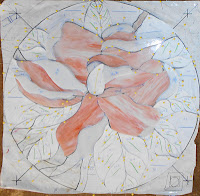 Rowena has the front side of her Tiger Window all soldered which means that she got both of her borders attached as well as the zinc channel.   She accomplishes a lot while she's at home so I think we will see this among our completed pieces next week!   When she comes back in we'll add a few wire whiskers to really set this piece off. 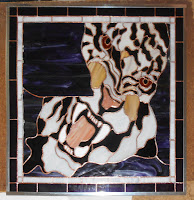 Becky S is rocking and a rolling on her Egret Window.   This week she began work on the upper tree section and now that it's all cut out she'll begin grinding it.   She's making excellent time on this large window and I know that it's going to be spectacular when it's finished.   I believe that the companion piece is even more impressive (if that's possible) so I can't wait until you see the pattern for that one.

Tracey finished her first Mother Mary Panel  and then got the center of the second one tacked together.  She didn't have enough time to get the first one colored and she disliked the color of the hair on the second one so she's going to finish both of these when she returns next week.

Martha has officially ground all of her Cardinal's feathers (and flowers) and has begun wrapping all of those pieces now.   Once they are tacked together she will use the glass itself as a pattern and get a perfectly fitted background cut out. 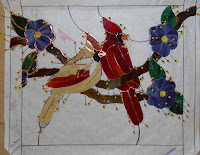 Jeannette also worked on this Dove suncatcher which is very nearly completed.   With just a little more wrapping and the soldering left to go I'm sure she'll have this dove completed upon her return. 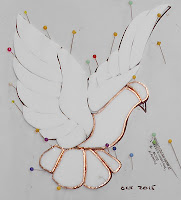 Becky S also worked on a second Butterfly Lawn Ornament which is now ready to be soldered together.  This will be finished before you know it. 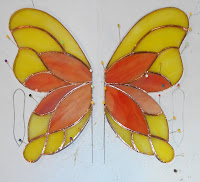 There's only one more set of classes to go before we hit the end of 2018.  It's been a quick year and 2019 should even go faster because after the first we are adding another class into the mix here.   I just hope I can keep up with who's doing what!