That's a Hell of a Way To Get Your Pork

We have so much to show you that we're just going to dive head first into our students projects this week.  But I will say that our tip next week will explain why the angle that you hold your soldering iron while soldering is so important.

Now let's start things off with Sheri who completed her round and VERY colorful Butterfly Window.   Her cutting and grinding is meticulous and it really shows in her finished piece.  I have to say that her glass choices are perfect (to me) as each of the colors are of similar textured glass. 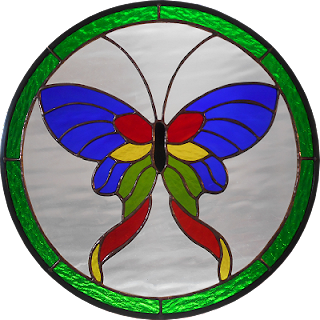 Shelley finished her Once Upon a Time Evil Queen Window and I have to say that it turned out lovely.   Good Queens should hope to look as attractive as this evil one does.   Shelley went the extra mile on this and even added red glass paint for the fingernails and then painted the solder that makes up the queens necklace pendant with a silver glitter nail polish to make it really sparkle.   I just wish it showed up in the photograph. 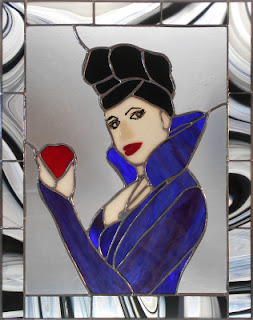 Lara's African Woman Window was finished this week and it looks very stylish indeed.  Changing the hairstyle was a good move and my only complaint about this window is that I didn't get a better picture of it.   I had changed the exposure level in the camera on a previous picture and forgot to change it back which blew out the clears and whites in this picture.   I've edited it as best I can and although I'm not thrilled, the picture gets the point across.   Lara really did great work on this regardless of what my photography shows. 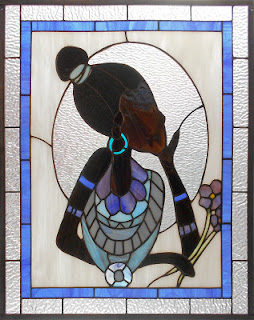 Cindy completed her Santa Face Window with plenty of time to spare for Christmas.  She makes one of these a year and always has great luck selling them.   Her mixing of two different whites in his beard gives this window a nice added touch of realism.  Ho Ho Ho! 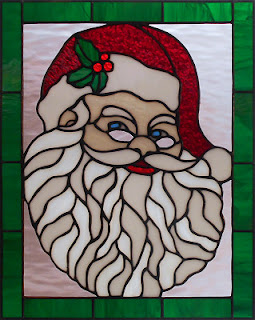 Patrice's Humming Bird and Morning Glories Window is officially finished and the end result is amazing.   Patrice mastered the art of grinding so quickly that it's almost scary.  This is going to make a wonderful gift indeed. 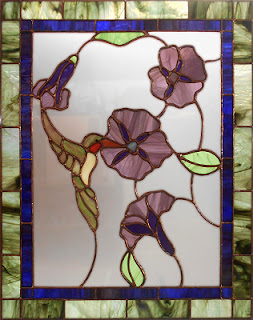 Carol finished this charming (and complex) snowman suncatcher while she was in class with us this week and she even has two more ready to go together.   I don't think I need to spell it out for you because you can easily see for yourself that these are cute! 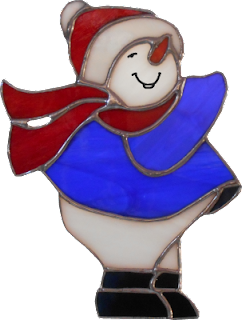 Beth finished her Iris Window with nary a second to spare!   She's still got some lingering doubt about her abilities but I think she's got nothing to worry about as she understands that slow and steady wins the race.  We're sadly loosing Beth as a student and our lives will never be the same. But we'll still see her from time to time.  Friendship last forever!  (I'll tell you what I want, what I really, really want.) 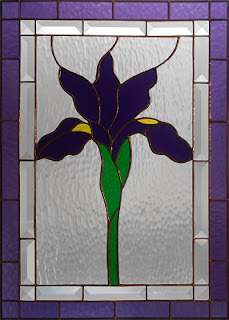 Cindy also finished her clear textured Cross Suncatcher and it really turned heads in all of our other classes. Expect to see a few more of these over the weeks to come. 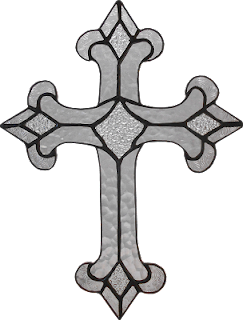 Jeannette completed her pair of Mickey and Minnie Mouse suncatchers and even has a third almost completed as well.  These are truly delightful and are actually fairly easy to make as well but it could be that Jeannette makes it all look easy. 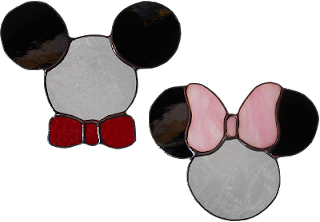 Angie started this Rose Window just last week and here we are one week later looking at it hanging up already.   She worked quickly and efficiently on this and the finished window is lovely indeed. 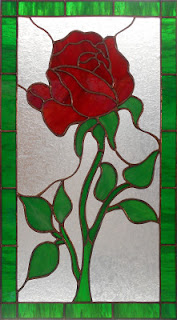 Tracey now has her third Cardinal window completed and says that it will be a while before she makes another of these.  A Mary And Child are up next for Tracey. 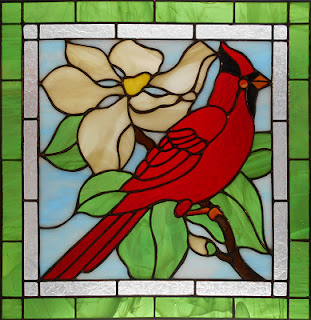 Jan has started what I think is going to be a spectacular Christmas Tree Window.   There's a simple elegance in this design that I think everyone is going to fall in love with.   And the icing on the cake is that this is SOOOOO easy to make.   In just one 3 hour class  most of her glass has been cut and ground.

Here are the other two snowmen that Carol is making. The clothing may be different colors but the pattern is the same.   I also showed her how to make these a tad bit easier to grind so if she does any more, well, we'll see if you can spot the difference.

Becky B is now cutting glass for her round Magnolia Window.  She's using a glass with a light flamingo color to it thus changing the standard Magnolia into Japanese Magnolia.   This is a wonderful change to a pattern that's makes it totally Becky's. 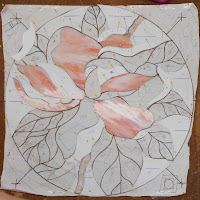 Roxane is back and she's now got the second side of her Compass Rose And Anchor Window completely soldered.   Next week she'll wash this window, color it and then move along to an Angel Suncatcher! 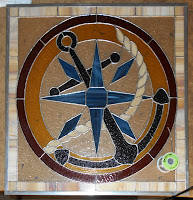 Linda L  spent her class time grinding the center circular section of her Houston Astros Window and it's really looking great (ignore the upside down word at the top-- it's not the actual pattern).   She'll tack this together before she does the center border that surrounds what you see cut out because that's the best way to handle circular borders as Sheri can tell you. 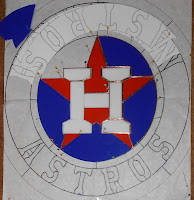 After completing her Humming Bird and Morning Glories Window Patrice immediately began working on her Houston Texans window.   Once she got all of her pieces cut out she realized that the star was supposed to be white!   I've been in similar situations myself.  What you do is stand up, dust yourself off and start re-cutting! 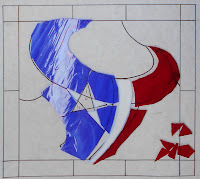 Mary Grace has all of her Birdhouse window cut and ground as of this week and she was able to get a channel attached to it and the front side soldered as well.  This window is practically a done deal! 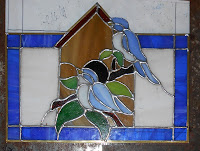 Susan R has the flower for her 20's Flapper Woman all ground and now has the green leaves cut out as well. She's currently at the point where she's trying to decide on the colors that will make up the rest of this window and I think we'll see some of those decisions upon her return. 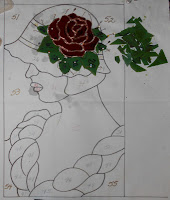 Martha has almost all of her Pair Of Cardinals Window ground now.    Once these have been foiled (and I'm thinking she'll begin foiling next week) she'll be able to tack these together and then use the actual glass pieces as a pattern for her background glass.  I'm loving how perfectly everything is fitting together in this window and I'm loving the colors as well. 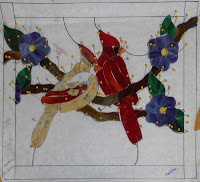 MiMi is working at a nice steady pace and her Industrial Fleur De Lis is looking better and better each week.  The toughest part of this project is almost behind her now and I know she's going to be thrilled at the look of this once the heavy lead sections are tacked together and the window REALLY takes shape. 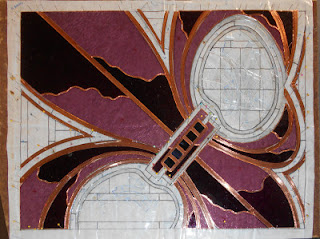 Terry resumed work on the top panel of her spiraling Flowers Window and is getting close to the wrapping phase of this project.   Her mix of clear and baroque glass for the background has been used perfectly in this design.  It won't be long now. 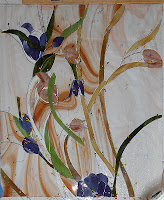 When Rowena came into class we had to tell her that the glass that she had ordered the week before hadn't arrived yet.   An hour later the glass was delivered and Rowena was able to start cutting it.   As you can see, she got the biggest piece of her background cut and soldered into place leaving just smaller pieces left to go before she moves along to the borders of this spectacular window. 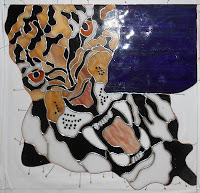 Roy  is making major headway on his newest LSU Window.   With most of this cut out he'll be grinding before you know it.  As I ALWAYS say, when you make something a second time it ALWAYS gets finished much quicker than the first one did.

Becky S  took the pieces to her first of two Egret Windows home to wrap and was thrilled when she was able to turn up the time to finish wrapping everything that she has cut and ground.  When she came in she laid everything out on her pattern and now you can truly get a feel for what this window is going to look like when it's completed.  She's working on the top section of the tree next.

Susan D has a humming bird and two dragonflies all cut out and ready to be wrapped.   I have a funny feeling that she'll get these three pieces together quicker than you can say 'Mosquito Hawk' 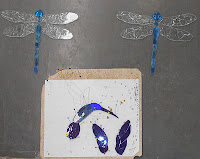 Sheri not only finished her first butterfly-- she also resumed work on her second Butterfly as well.   She's making adjustments to this one along the way by changing the body entirely and since she wasn't completely thrilled with the border on the last one she'll be swapping out the green border (There's a piece if it in the picture below) and using a different color on altogether. 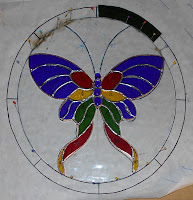 Linda F worked on a Modern Cross Suncatcher and by the time class was finished she had all of her glass cut, ground, wrapped and ready for solder.  That's impressive indeed.

Brenda is about to start on a new project featuring a woman's head with flowing hair.   It's a window that will be going in a Salon and the 818 in the bottom left is the the street address.  That makes this window stylish, functional and practical all at the same time! 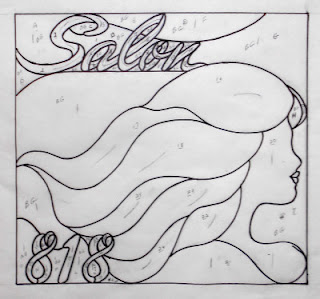 There you have it.  We featured 12 completed projects this week and I think that may be a record.   That means we have a new number to shoot for next year (or possibly this year yet!)