Did I Hit A Nerve?

Last week I said that we'd discuss how Belinda was going to cut out all of those church slats so quickly and efficiently so here we go.  In the image on the left  you can see that Belinda still has an opening in the center of her church where you can see the pattern underneath the section where she has no glass.  It's hard to see but the pink lines show where the slats will go, but if we cut them with individual pattern pieces there will be a LOT of grinding to do.  Since they are all the same color and cut from the same piece of glass there's a much simpler way to handle this.   First we cut a single piece of glass and grind it so that it fits into the opening.  You can see the white glass in place in the picture on the right--I've outline it with red lines.  The white glass is now covering the pink pattern lines and the window outline so we're ready to begin. 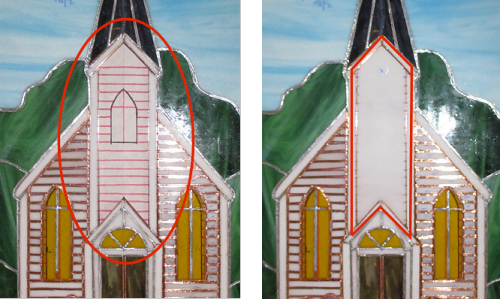 Since the white glass we cut fits into place all we have to do is transfer the lines onto the glass that we just ground and then make straight cuts across being careful not to mix anything up as we separate each piece.  We also have a window that needs to go in the center so we made the window separately, tacked it together, and traced around on the white glass as well.  After removing the piece Belinda cut the horizontal cuts and then she cut the vertical cuts to make room for the yellow window.  Next she lightly skimmed each piece on the grinder to make room for the foil that has to go around each piece.  Finally she wrapped each slat and put it back into position on the pattern as you can see on the right hand image. 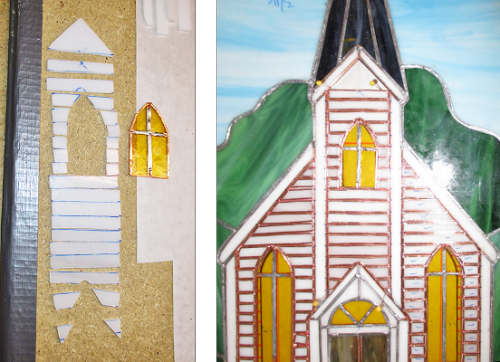 Working this way reduced the amount of tedious grinding that she would normally have to do because the glass already fit into place before she started cutting it.  Now Belinda is ready to start tacking this all together!

Here's another example.  I cut the roof (and the shutters) for my Lafitte's Blacksmith shop using the same technique. Bird beaks are a great place to utilize this tip- just cut the beak as one piece, grind it to fit and then snap it in half to make two pieces.   It's so much easier this way!. 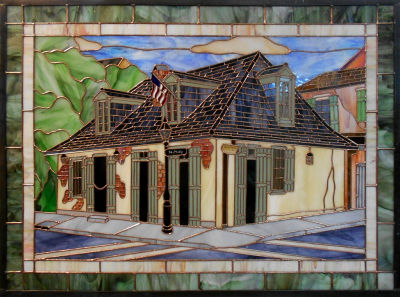 Ok, with that out of the way let's look at our first finished piece this week and that would be MiMi's Heron Window which is absolute perfection.  I feel that the circular shape of the finished window only adds to the attractiveness of the pattern.  Her glass choices are so spot on that someone who saw this posted on Facebook asked what  MiMi used to paint the feathers! Everything about this says perfection. 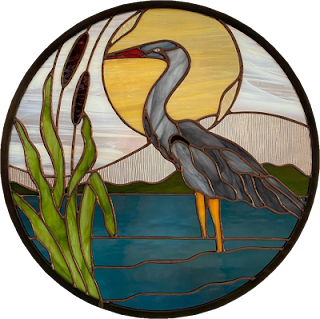 Wow, Jeannette's Swan Window is nothing short of lovely.   It's calm and peaceful and most importantly, it's exquisitely made!  If no one else makes one of these soon I may just be next in line to do one of these because I think this would sell quickly. 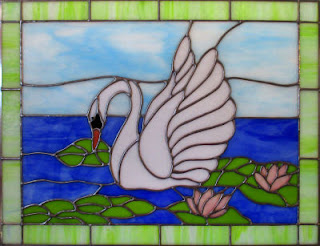 Tracey's Magnolia Window has been getting a lot of attention in all of the other classes with  so many of our students considering making one for themselves.  It's a great design that really lends itself to glass as Tracey has proved here.  This is our second round window this week so I'm guessing that circular windows are back in style. 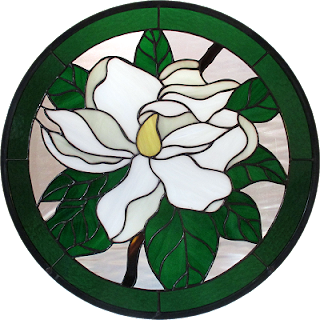 Mary put the finishing touches on her Sunflower Window and the end result is stunning.   Melissa did one of these sometime last year but Mary made this her own my changing up the colors and the number of borders surrounding it.  I just love it when someone goes against the grain and doesn't take the easy route by following suit. 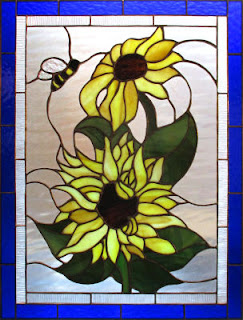 Lisa is our newest student and that means that we're looking at a Butterfly Suncatcher!  She had no problems whatsoever while making this.  Her cutting and grinding were wonderful so I'm thinking that her first window (an Owl) will look just as great.   We'll see that get started when Lisa walks in the door again next week. 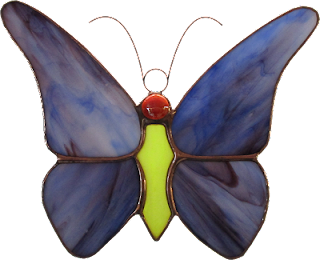 Barbara H made her first curved Bee Lawn Ornament and discovered that these things are more work than meets the eye but also that the end result more than justifies the extra work.   This is the bee's knees! 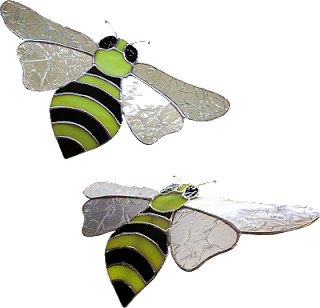 Angie resumed cutting out glass for her Coffee Window and ended class with it all cut and ready to be ground.  Thankfully (or luckily?) she picked a piece of glass that cut very easily for all of the curly pieces that make up the steam and spell out the word Coffee.  Things always go better when you have glass that co-operates with you.

Linda F made incredible strides on her Underwater Fish Window and now has it almost entirely cut out save for a handful of pieces that were mislabeled and therefor have to be cut again.  This is shaping up to be one impressive project and Linda is swimming through it with the greatest of ease. 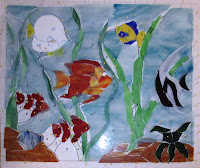 Belinda's Church Window is very nearly completely cut with just the last two pieces of her 'banner' left to cut.   The straight line that comes off of the top of the church and into the sky will be covered by a leaded cross that will look as though it's perched atop the church and we'll get to see that attached next week as well!

Jeannette also began working on her Coffee Pot  Window and she has the table and the pot almost completely cut.  There are only four black pieces left to go on the pot itself and then there's just the background. 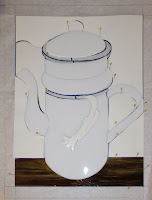 We also see that Jeanne M is moving along at a nice steady pace with her large Easter Window.   She's got her eggs cut out now and even started on the Rabbit which I'm sure we'll see pieced together next week.

Susan R has more background cut for her Seafood Window.   This is coming together more and more with each passing week.  This is Susan's tour de force because the both the work and the detail in this window are spectacular.

Mary Grace ran into a problem while making her Anchor Window and this week we began to  apply a work around to fix it.  The problem is that she had run out of glass and ended up one piece short for her border.  After looking around just about everywhere for a matching piece of glass Mary Grace finally had to admit defeat and come to terms with the fact that there simply isn't any more of this glass to be found.   Rather than re-cutting the entire border we've decided to cut the wide border down to half of its width.   That left us with 7 sections that weren't going to be used.  Next we're going to take one of those seven pieces and use it to cut out the now thinner missing piece.   Once they are attached she'll border it one more time with a different amber glass and stagger the breaks like brickwork.  Problem solved! 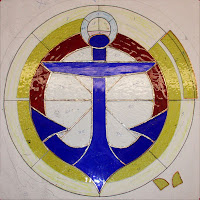 Kerry's Deer Window is almost completely ground now and I have no doubt that he'll begin wrapping this upon his return.   He moves quicker ad quicker with each passing week and his precision is increasing as well.

Martha has all of her Flowing Window ground now and will begin foiling all of the pieces which will make the design in this pattern much easier to see while it's on the pattern.   We have this picture problem whenever anyone does a window with all clear glass (or a lot of white like in Jeannette's Coffee Pot Window).

Lara got her border cut and attached to this beautiful window that I'm always unsure what to call.  This pattern used to be showcased in an ad for Victorian windows so that's what I call it-- a Victorian Design.   Nonetheless, it IS a beautiful window and Lara is almost finished with it.   One more week ought to do it...

Melissa is now past the halfway point on her Peacock Tail Window and things are taking shape more and more with each passing class.  There are a LOT of pieces in this but Melissa is taking it one piece at a time and winning the race by not rushing.  It won't be long before she looks back on making this as a memory.

With the bowl of her Fruit Bowl all cut and ground, Jeanne L is contemplating wrapping and tacking together those pieces.   Since we usually (always!) cut the background for this design from one piece of glass the idea of tacking it together is a sound one indeed (and what I'd recommend doing). The next time you see this you may find that the bowl is much easier to see on the black and white pattern than it is this week.

Jeff worked on tweaking the solder on his Flower Scenery Window and is so very close to being finished that it isn't even funny.   This window is entirely his own effort as he's accepted only the leanest, barest,  minimum amount of help from me on this project.  And because of that, Jeff has learned so very much. 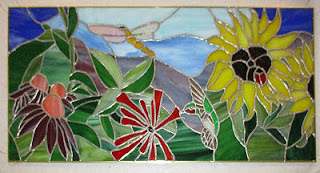 MiMi also began this leaf suncatcher that she cut out after completing her Heron Window.   This will easily be finished before you know it!

Always busy, Jeannette also has this Cardinal Suncatcher in the works and it just needs to be ground and wrapped.  This pattern is quick work for Jeannette.

Cindy has begun making two medium sized Rooster Suncatchers and also worked on separating three birds from a window she made a while back that she's unhappy with.  It took most of the night but the birds have been freed and next week we'll see what we can do about redrawing a pattern around them. 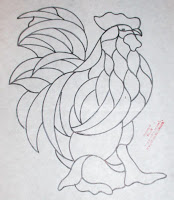 And there you have it.  All the news that's fit to print!