You're only as good as your tools are.   I have about 7 pairs of running pliers available to me at any given time but I always go for one pair in particular.  That is because I go out of my way to oil them regularly and loosen them up.   When it comes to running pliers you want them to open nice and easily so that you can precisely adjust the pressure that they put on the glass when you squeeze them.  If your running pliers (or even your breaking pliers) are tight and hard to open and close then you need to oil them now.   Both are oiled the same way: Hold the pliers so that the gripping end faces upward and open them as wide as possible.   Put a drop of oil on them where the green arrow on the left shows.  Turn the pliers upside down and place the oil where the second green arrow on the right indicates.   Next open and close your pliers a good number of times to allow the oil to penetrate.  Do this weekly and when your pliers open and close effortlessly you'll thank me.  :-) 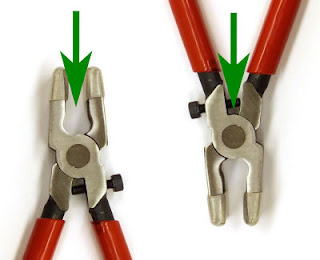 This week Angie completed her Easter Lily Window in record time even though she was unable to work on it during the week while at home.  With each project Angie gets faster and faster as well as more and more accurate with her cutting and grinding.   The proof as they say, is in the pudding (whatever that means). 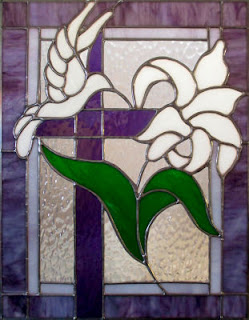 Jan finished her Red Fish Window and there's no doubting what kind of fish it is.   Working small isn't easy and this window isn't even 12 inches wide so there was a lot of tiny, detailed pieces throughout  but Jan pushed through the pain and made it look great. 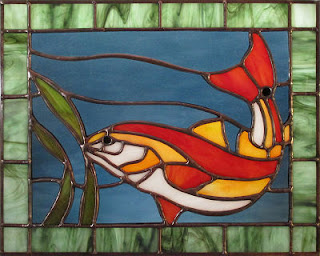 Rowena's Mardi Gras Mask Window captures the festivity of Fat Tuesday perfectly.  And speaking of perfect, just look at all of those little round pieces that form the beads in the necklace that drapes over the mask.   Rowena's attention to detail and exactness is what makes this window look so great. 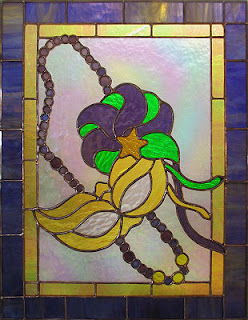 Betty finished working on two more Suncatchers that both involved wire work.   She's developed quite a skill for wire bending as you can see in her completed projects.  I personally love the flower and may have to make a few of these myself. 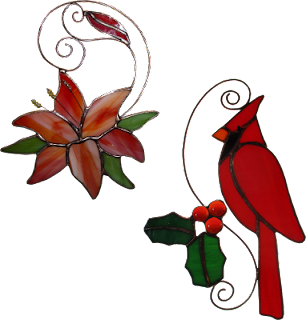 Cindy started this Love Panel just last week and literally wrapped it up this week.   People always get confused about the letters in the glass and how they are formed but they are simply cuts in the glass.  In this case the lead lines were curved to spell out the work LOVE. 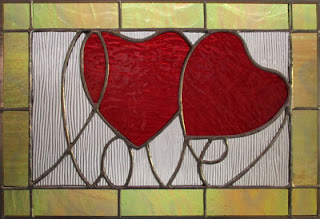 Kerry finished cutting out his Deer Window and moved on over to the grinder while he was in class.   Working from the bottom up he's already got the chest and lower part of the Deer's face looking great. 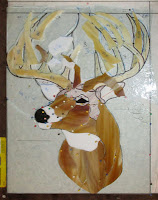 Jeannette filled in the few missing pieces for her Swan Window and then worked on a border for it.   The green that she picked manages to balance a brightness with a softness that frames out this lovely design.   Before the day was done Jeannette had her front side soldered and is now ready to work on the back side of her window. 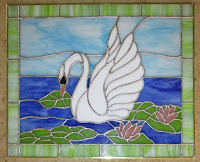 As you can see, Susan D got her Ali Dog cut out and WOW! does she look spectacular or what?  Her shading is spot on and the face looks fantastic.   If you're wondering where Ali's back legs are don't worry -- Ali is actually sitting on a sofa with her front legs hanging off and that will become apparent once Susan begins working on the background. 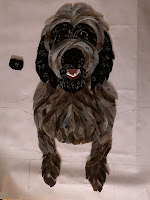 Jeanne M started cutting on her Easter Window and although it's difficult to see, her clear antique background is all cut out.  Expect to see more pastel colors added to this when Jeanne comes back in.

Annette got her Max The Dog Christmas Window tacked together and then had to decide what she'd do for a border.   Since this was made to match the size of her Grinch Window she's decided to use the same two border colors but she's reversing them so that the blue border doesn't touch the blue sky.  That means her inner border (as you can see) is green. 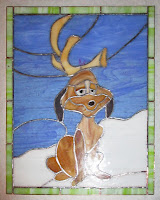 Belinda cut the slats for 2 of the 3 sides of her Church window and even got them wrapped and tacked into place.  This window is very near being completed and I'm thinking that she'll have all but the border tacked together when we next see this.  Next week we'll go over just how she did this all so quickly in our starting tip of the week.

Martha worked diligently grinding her Flowing Textures design and it's fitting together like a glove.  It won't be long before she starts wrapping these and then you'll really see what the design looks like.   Me, I'm thinking she should use black backed foil  because black patina works so well with clear windows.

Jeff  finished soldering the second side of his window and is now just touching up some of the soldering.  I suspect that he'll have this completed upon his return when we'll see this in all of it's beauty.

Shawn  finished soldering the front of her Sunflower Window and then flipped it over to do the same to its back side.   All the while she was soldering I kept hearing her say that she was doing terribly but you know what?  She was wrong because it looks wonderful to me. 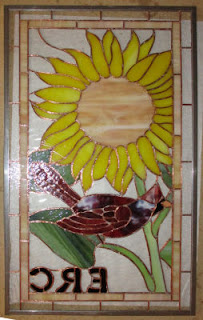 Mary, like Shawn, got the front side of her own Sunflower Window soldered as well.   She also moved on to the back of her window so it looks like we're going to see two sunflower windows finished at pretty much the same time. 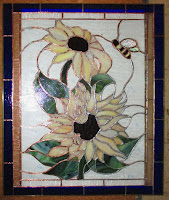 Tracey  came in with the green glass pieces for her missing leaf cut out and then after grinding them to fit she tacked them into place and set upon cutting and grinding her 8 border pieces.   She wanted to use a green glass and in the end she settle on a cathedral (monochromatic) clear green.   It looks very dark on the table but just wait until you see this with some light behind it. 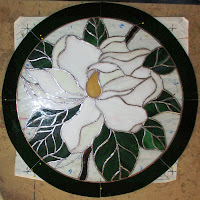 Mary Grace is shy one (big) piece of glass for her Anchor Window so while she's waiting for it to turn up she's moved along to this Cardinal Suncatcher.  She got it all cut and ground while in class and is ready to wrap and solder this now.

Melissa added more feathers to her cap, so to speak, by grinding even more tail feather sections.   Once this is all ground she'll still be separating sections the way that Belinda did in her Church Window.  This project is certainly going to be Melissa's Piece de Resistance 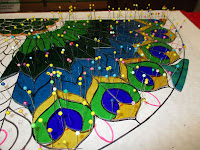 Susan R has almost all of the first section of background pieces ground for her Seafood window.  Once they are wrapped and tacked into place she'll carefully slide another piece under her window and start the process over again.

Lastly, Linda F began working on an underwater fish scene and after she traced out her pattern she began cutting glass.   It has many, MANY pieces so she's only cutting out her paper pattern a section at a time to help keep things organized.  Alas, I have no proof of this but will show you what she's making when we return next week.