Well then, as you might have suspected Hurricane Ida managed to screw things up this past week.   We were very lucky and received no damage and no water but we did tear apart the shop to prep for water and ended up spending a few days after power returned to get the shop back together.   Because of that this post is actually a week late.  As I said though, we were lucky.  Sadly, a number of our students didn't fare nearly as well as we did especially those out in the Houma area.  To our students who are in need, please know that all you need to do is ask and we will gladly help in any way possible.

So then, let's get started here.  Annette's Crow and Moon Window has a unique look that really sets it apart from most windows that we see.   Starting with the subject matter and working its way on down to Annette's wonderful work, this is a head turner to say the least.   The blood red, sparkling eye, which is less than an eighth inch round, actually commands your attention most.   Annette wasn't thrilled about making this in the beginning (someone asked her to make it for them) but in the end she and all the rest of the students in class ended up loving this piece.

Lisa's first of two Etched Bevel Panels looks fantastic!  Simple, yet incredibly charming, this panel is something that pulls you right into its beauty and elegance. The use of Fractures and Streamers glass for the background along with the beveled border just completes the look all so well. 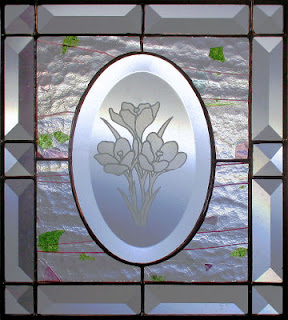 Here's Linda F's Bee Hive Suncatcher which is actually a variation of something she found on the internet.  The original had the pair of bee's tacked on top of the hive and the stripes on the bees were painted on the glass but when you make something like this using the 'overlay and paint' method it's only visible on one side and the front just never lights up correctly.   That's why I always say 'No' to overlays and yes to putting just a few minutes more work into a project like this. but cutting everything. 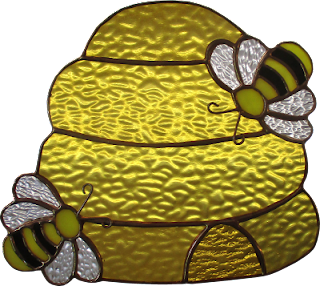 Mary Grace completed her Cardinal on a Branch in a Hoop project and didn't it turn out to be stunning?  We have a new way to do cardinal eyes and I think it works perfectly, don't you?  All in all though I believe that it's the wire work that makes this stand out so nicely and really what defines this piece. 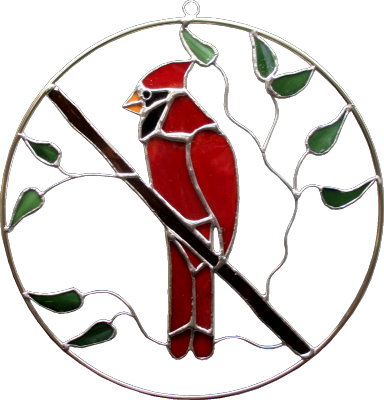 These are Pawn Chess Pieces that Susan D created for a chess board that will be raffled off with the proceeds going to Proud House. I must say that she's done us all proud with her execution of these small  yet completely recognizable three dimensional pieces. 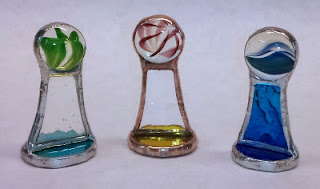 Susan D also put the finishing touches on 3 more Flower Angels complete with wire Halos and decorative wings.  She's certainly on a roll with these and the best part is that they have been finished in plenty of time for Christmas! 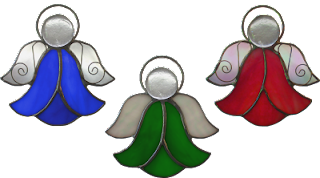 Speaking of being on a roll, Betty made either three or four (I'm leaning more towards four) more of her famous Reindeer Suncatchers.  As always the antlers are wire work (each antler consisting of 2 pieces of wire) attached to the suncatcher wherever they touch a lead line.   You may find people selling these online without having a round section of glass cut as a background but the wire work will never stay attached on those reindeer while Betty's reindeer antlers are perfectly secure. 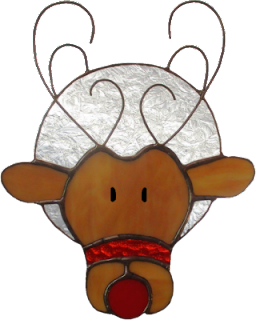 And now we're onto projects that are currently under construction.  In just one class Annette was able to cut, grind and tack together this Dark Side Of The Moon Album Panel.  She'll be coloring the lead with black patina which means that those lead lines coming off of the triangle bevel will almost completely vanish against the black glass background giving this a VERY authentic album cover look.   Pink Floyd-- you just can't go wrong with them in my book. 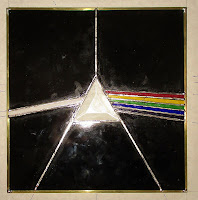 Meanwhile Shawn ground all of her Colorful Butterfly Suncatcher.  After that was done we redesigned the body so that this would be completely sturdy as a suncatcher.   She's also got half of this wrapped already which to me means that we'll see this completed when Shawn comes back in. 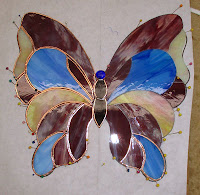 Here's another Butterfly that's under construction and this one is being made by Linda F.   This will be a 3D flowerpot Ornament which will be attached to a stake which means that we want a nice straight line running down the center of this Butterfly.  Once it's wrapped and the wings are soldered separately she'll tack them together at an angle to the stake and then add a body on top of the butterfly to hide the straight line which (because of the stake) will give this piece its strength. 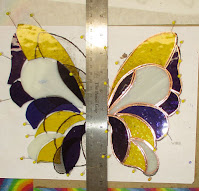 What's this?  A third Butterfly!  It would seem that we have a new popular theme here in class.  With almost the entirety of her window ground Melissa began wrapping pieces this week.   Why wrap before she's finished cutting and grinding?  Well, Melissa forgot to bring along her orange glass which meant that she couldn't fill in the three missing pieces but they will fill in quickly enough when we next see her. 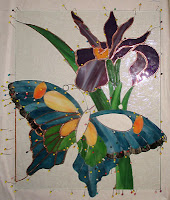 I have to say that Martha's Build A Better Life Window is coming together at break neck speed and her cutting is nice and exact.  She mixed two different greens for use within her trees and ended up just mixing them randomly throughout the window.  Just that small extra splash of color is really going to give this window an incredible look when it's finished.  In stained glass it's always more about subtle differences than HUGE contrasts. 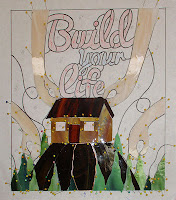 Next up I have to say the word 'incredible' because Cindy's pair of Ice Cream Cone Windows is just that!  Although you can only see one of them in this picture they are both wrapped and ready to be tacked together.  Man do I want some ice cream now! 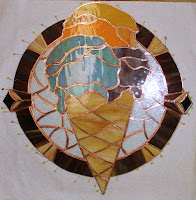 .
Linda L has one Angel Window completely tacked together and the second one just needs to be wrapped.   She's used Clear Sandblasted glass for the background of these angels and that tends to stain a slightly if you leave the flux side on the textured side for too long so Linda tacked the first window and then wiped it down before moving along to her second angel.  Better to be safe than sorry!

The hexagons are taking over MiMi's house but with each passing week she joins more and more of them together to make more windows.  Her latest (a window we call Number Six) has been completely ground and she has about a third of it all wrapped up in copper foil. 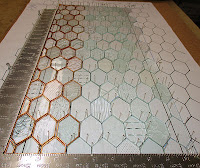 Susan R's Bathtub Lady is all ground and ready to be wrapped.   She's picked a perfect color for the border that will surround this and I'll show you just what that color is when Susan returns and gets this tacked together and borderized.  I love all of the detail she got in all of those bubbles! 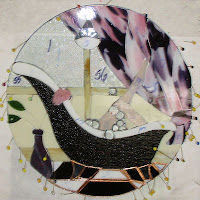 Now I just HAVE to saw that this is certainly not your normal looking Halloween Witch!  At least not from behind anyway.  She's downright attractive when you get right down to it and this is just her back side.  As she stands this witch is completely ground and awaiting some foil so she can get tacked together and then soldered.  Will Kerry be able to complete this in time for Halloween?  I have NO doubt about that at all! 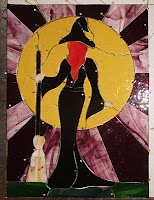 The Cardinal that Judy is working on is all tacked together and the intricate, fancy border is just about completely cut out as well.  Judy will wrap and grind all of these border pieces when she comes back in and then this Cardinal will be ready for some serious soldering. 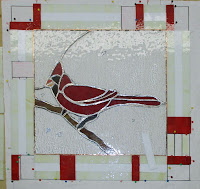 Last week I noticed that Shelley had taken her cats home to wrap and tack together without having the noses cut into place.  Luckily I got in touch with her before she had a chance to tack this together which means that this week she was able to cut three little cat noses and fit them into their proper places.   All this needs now is a border and then a little solder to finish off these three wise cats.

This picture doesn't really allow you to grasp just how large Barbara's Beveled Window is.  I think the next time I take a picture of this I'll put a dollar bill in the shot so you can more easily tell just how large this window is.   This week Barbara tacked it all together and then added the final border before she began soldering.  It won't be long now! 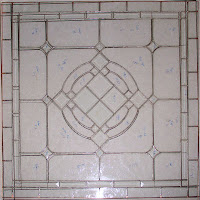 Susan has the spirit of Christmas in her and now that her Angels have been completed she's going to move along to these four Beveled Christmas Ornaments.  Two of them are already close to being completed so that means we should see the four of these at the top of our next post along with any other projects that are completed.

Here's a look at Sheri's latest Yippie Flag Window along with a hard to see pattern for a Green Bay Packers Football Helmet.   Sheri had a slight problem with her Yippie Flag when she stumbled with the board it was on and ended up scattering numerous pieces.  Sadly there was no way to determine which piece went where so she had to re-cut two of the leaves and now has to wrap all of those pieces again.  Still, it could have been much, MUCH worse! 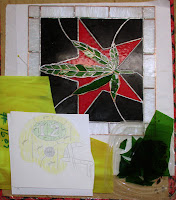 To wrap this all up we come all the way back to Lisa who not only completed an Etched Bevel Panel this week but also got a second one completely cut, ground and tacked together.   It was certainly a productive class for Lisa wouldn't you say?  And this one easily looks just as good as the first one does! 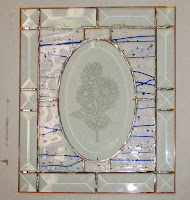 So there you have it.  A week later but here on your computer (or phone, or tablet) screen nonetheless.  See you all next week!
Paul
Bayou Salé GlassWorks

Posted by Bayou Salé GlassWorks at 11:54 AM