There's been a lot of talk about hinge points lately so let's discus them.  Hinging occurs when you solder two straight lines together.  They can easily fold because the only thing holding them together is the adhesive of the foil.  That said, a line doesn't have to be perfectly straight for it to be a hinge issue.  Even a slight curve can create a hinge point.  In the pattern below the wings can easily be bent along the both sides of the body highlighted by green lines.  Many times I see people post that the piece needs some wire following the green line to strengthen the piece but that's very bad advise because it does nothing at all to support the weight of the wings.   Wire needs to be run perpendicular through the hinge point, not parallel with it. 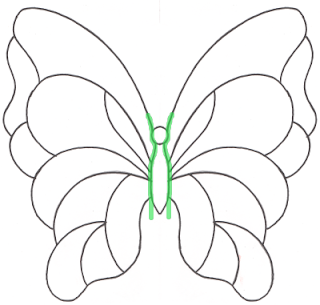 Below you can see that I've altered the butterflies body so it had more curve to it.  That will go a long way to make the wings more solid but it's still not enough to completely fix the hinging problem.  To fix things once and for all I've also split the body into two separate pieces and lined up the split to connect with two lines on either side of the wings.  Now I can add some wire (about 14 gauge) along the back of the butterfly following  the red line.   The wire with be covered with lead and will not be visible at all.  The strength that this solution adds to this butterfly suncatcher is amazing. 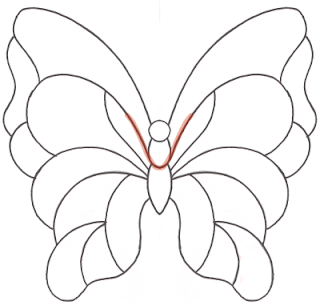 Alright, with that out of the way I'm going to ask, "What do you do when you need a square window with a beveled center but you can't find a beveled cluster that you like because they mostly tend to run far long than taller?"   Well, you can make your own cluster using stock bevels!  That's exactly what Barbara H did in her window.  Elegant?  You bet!  Even though there are many bevels in this it's made entirely of stock bevels which are less expensive than clusters yet still give a refined look to the finished piece.   What a beautiful window Barbara created but I don't think she'll be making something of this size again any time soon.  At 36 x 36 it's a big one! 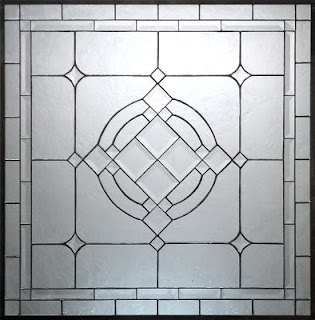 Cindy's pair of Ice Cream Cone Windows are finished and aren't they something else?  They are stunning and they will be making a very bold statement  in the window of The Lamp Station Ice Cream Shoppe in Franklin.   In fact I've just found out that they're already hanging in the window now.  I'd imagine that Ice Cream Cones will be selling briskly after people spot these from the street! 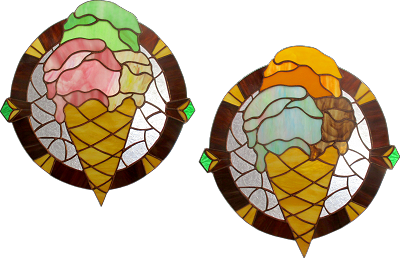 "All you touch and all you see is all your life will ever be."  Those are the words that run through my mind when I look at Annette's stunning rendition of Pink Floyd's The Dark Side Of the Moon Window.  This looks so amazing because the Annette used black patina on the lead which makes three of the lead lines (running from each point of the triangle bevel) almost completely disappear into the black background glass for a seamless look that matches the album cover perfectly.  I ask you, what's not to love about this? 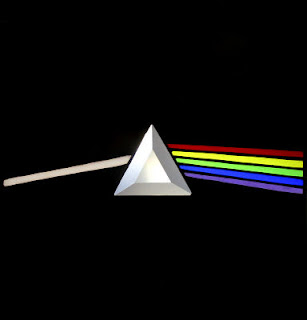 Shawn's large Butterfly Suncatcher has been finished and you might recognize it from the tip I posted at the start of this blog.  Although we altered the body so that it didn't contain straight lines I still felt the need to add a bit of wire for some extra support.   Looking at the finished product you'd never know that we added  wire and a lot of that has to do with the fact that Shawn's cutting, grinding and soldering (especially her soldering) was spot on.  This is what a colorful stained glass Butterfly should look like! 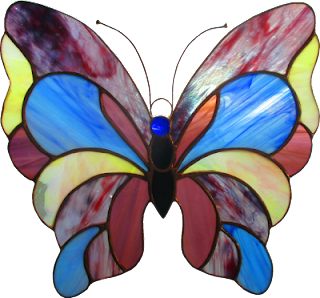 Susan D has even more Flower Angels and Leaded Beveled Christmas Ornaments under her belt.  Sadly one of her Angels had a crack in its wing but we're going to fix that next week and add it to her finished items when we see Susan again. 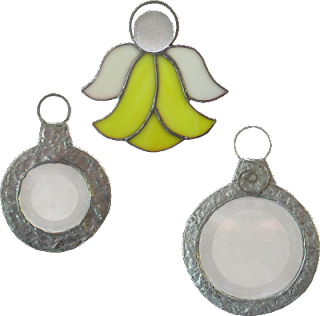 Although it's hard to make out the champaign glass in her window right now, Cindy's Bubbling Champaign Glass is already nearing completion just one class into its creation.  We'll go through the process of how she's making this window as soon as it's completed which could actually be as soon as next week.   It's an interesting process and it doesn't follow the path you might think that it would.

Mary's Dueling Hummingbirds suncatcher has been tacked together and all she needs to do it fit a few background pieces into place and then solder this.   We've held it up and all I can say is that it looks even better than anyone expected it to and let me also tell you that expectations were already running high!

Ann is back in action after taking the summer off to teach out of the area.  As you can see, those few months that she stopped doing stained glass didn't slow her down in any way because in just one class she was able to cut, grind and wrap her newest Cross Suncatcher.  This will surely be completed upon her return. 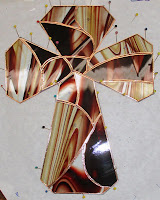 Sheri is working on a large Green Bay Packers  Helmet and she wasn't sure if the helmet should have the number 12 in it or the Green Bay Packer Logo.  In the end she settle for the logo so we simply drew up an oval with a G in it and she cut ground and wrapped those pieces which she will next tack together before making the rest of the helmet.   She'll then drop the logo into the position where the 12 was drawn in the original pattern.

Lara's so close to completing her Geisha Girl Suncatcher.  She's only got the flowers on the back of this piece left to solder and then this will be finished so expect to see this hanging up with some light behind it when you next see it. 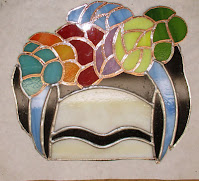 With all of the glass cut out for her Magnolia Window (save for the border which we ALWAYS cut after the window has been tacked together), Tracey stood herself in front of a grinder and began fitting all of her pieces together.  She's a good quarter of the way there so she's speeding through this project in a nice precise manor. 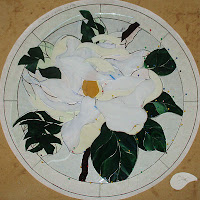 Kerry got his witch window all wrapped and tacked together before calling it a night.   that means that he'll add a border as soon as he comes back to class and then be set to start the finishing solder bead on it.  That means that this will be completed in plenty of time for Halloween. 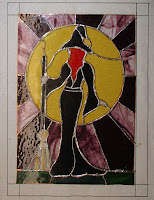 Shelley has the front side of her Three Cats Window soldered leaving, of course, just the back side to go.   When she's through with that she'll add wire whiskers to the noses and then paint on the mouths.  Boxy kitties are very stylish, don't you think? 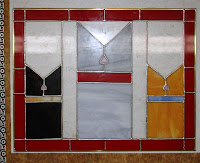 With only a handful of pieces left to wrap Melissa is getting excited about finishing this window.  It still needs a double border added to it but that won't take long at all especially since she's already decided on the glass that she'll be using for the borders. 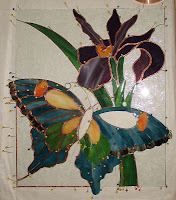 MiMi has got this window is just about in the bag.   Number 6 has got its zinc channel attached and its front side has a good deal of a finished bead on it so MiMi should be starting Number 7 before you know it!

Lastly we see that Susan D has got another Flower Angel well under way.  She's certainly a pro at making these now!

We're missing a lot of students due to the effects of Hurricane Ida.  I know that all of our students are eager to get their lives back together and their stained glass back on the cutting table so things can get back to normal for them!
Paul
Bayou Salé GlassWorks