Whatever Arouses Your Eyes

Here's something that's interesting but rarely (if ever) brought up in class.  When you grind a REALLY small piece it can be beneficial to flip the bottom side to the top and then quickly skim it around the grinding wheel again.   This helps keep the edge of the glass at a nice even 90 degree angle which helps  make wrapping the piece a whole lot easier.
First off this week we have Let who has managed to make this beautiful detailed Poppy Window in just three short weeks.  When you realize that  Let is out newest student, well, that really puts things into perspective for you.  Look how perfectly the stems of the flowers line up and connect across multiple pieces of glass.   Let's eye for perfection will take her far! 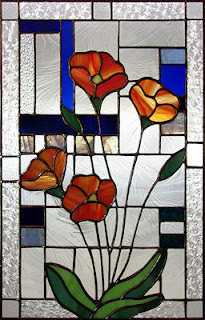 Linda F's Monogram 'M' Window with morning glories really turned out spectacular.   Sometimes a simple pattern can be just as impressive as a complex  design and this window easily proves that.   Everything from her soldering to her cutting and grinding is perfect on this. 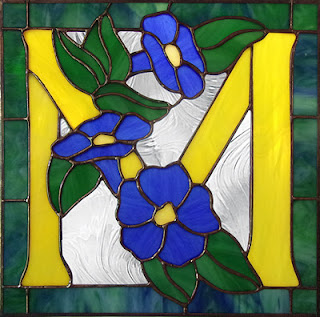 Susan R's large stained glass Aloe Plant is finished and ready to be potted.   I've taken the liberty of photoshopping a pot below it to give you a better idea of what this will look like when Susan displays it at home.  This was built in three layers so there's actually a little bit of depth to  this. 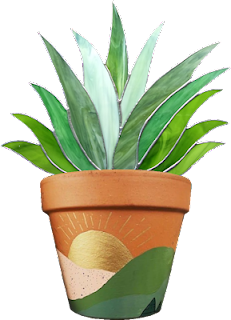 Martha's Louisiana Iris Panel is small window but a huge success.   I know it looked very dark the past  two times we saw it but now that it has light behind it you can clearly see what beautiful glass she picked for the purple flower.  Mixed colors always bring some extra realism into a design because nothing is ever really one flat color. 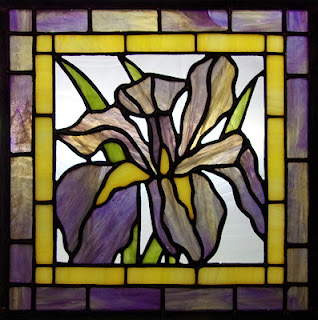 Steve's got his three newest Fused Glass Doors finished.  The minor difference between these and his previously made doors is that these feature 45 degree angles cut  along the bottom  'wood' sections making them match the actual door better.  Either way, they're each equally as charming as the next. 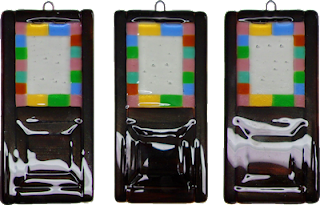 Kerry's completed his trio of Agave Plants and these things look incredible.  He's made his hand sized which makes for great tabletop decorations.   Hmmmm, it looks like he has a place for one more small one there in the center... 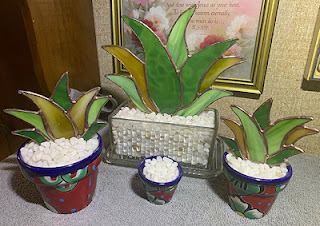 Mary's second Humming Bird Panel may use a different color scheme from its first iteration but the beauty of the design is still very much front and center.   Mary has been showing a high level of proficiency with her stained glass abilities and this window, that she made with little to no help, shows off her skills admirably. 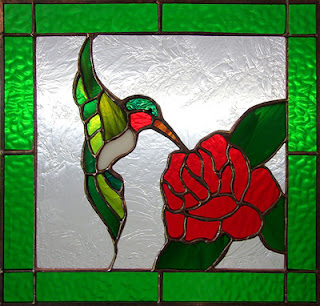 Lisa's newest Spinner has a hook at the bottom which allows an accent piece to hang off of it.   I tried everything to get a video of this spinning along with the accent piece hanging from the bottom but all I could get were very small and blurry videos so I decided to let it go.   After all, a picture speaks a thousand words, right? 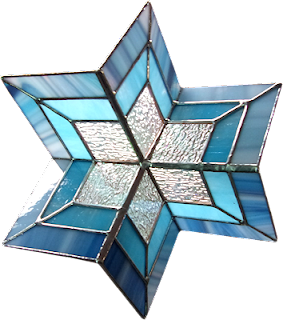 Betty has two more Dragonflies under her belt and she even managed to repair a third dragonfly after  replacing a wing that 'somehow' managed to separate itself from its foil and hook.  These are the joys of selling and repairing pieces that you've made.

Mary Grace really buckled down this week and managed to get almost all of the peacock portion of her second peacock window cut out.  This one is a mirror image of the first Peacock that she made but she's changed the colors up by making this in various shades of green.  All I can say is that it's stunning already.

Susan R started and made excellent progress on a Rosebud Panel of her own.  The red glass that she's picked is incredible when it has light behind it.  Judging by the speed at which this is going, it won't be long before our readers get to see this with some light behind it to show off that red glass. 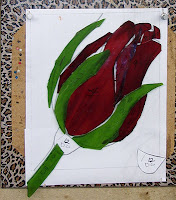 Cheryl has wanted to do a tree Of Life for a while now and started cutting this out at home.  This week she began grinding all of her pieces and she's well on her way towards getting this colorful window fitted together.

Steve also began working on two Initial Panels.   There's also two more letter 'A' Panels that have been cut out by Lisa but I didn't manage to get a picture of those.

Judy's Plate Teapot  Window has taken shape in a big way this week.   With all of her glass cut and ground (save for the border) I'd say that it's safe to say that this is one sweet idea.   Plates are becoming the rage here in class and projects like these show you why. 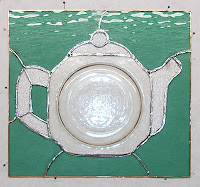 Ann's colorful circular portion of her 'Cross' Window is almost completely ground now having just a few more pieces left to go at the bottom of the circle.  This section will be completed and then the thin cross portion (there in the upper left) will be tacked on top of the circle to finish the whole thing off.. 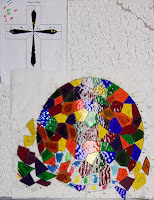 June finished cutting all of the glass for her Nursing Window and has moved on over to the grinder to make sure that each piece fits perfectly into its position.   Once all of this is ground she will cut in the ECG lines and then wrap her pieces in copper foil so they can be tacked together. 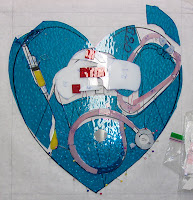 Melissa's still a little unsure of her background glass so she's been working at the grinder.  Once this is tacked together she'll be able to place different pieces of glass under it to see exactly what the window would look like with each given piece of glass.   That really takes the guesswork out of the window making process.

Cindy's been very busy working on not one but two different windows.  Her Blue Heron is all cut and ground with only the border left to be attached while her Deer Window is all set for solder.   The two deer were based on a drawing that someone wanted to immortalize in stained glass because it was a sketch that their father had drawn.   Cindy has made sure that it will never be erased now.

Martha is also trying to work out a background glass for her new Franklin Street Light Window.   She's thinking about Fractures and Streamers and she's almost to the point where she's going to have to make a decision because the hard work is already done on this. 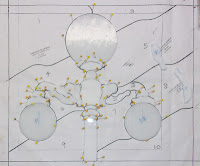 Linda F also spent time working on her Stained Glass Cross.   All she needs now is a few border pieces to finish this off and I do believe that will happen upon her return next week.

Annette's Transom Window is officially being soldered now and it's certainly not failing to impress everyone who sees it.  This is a perfect example of how slow and steady wins the race.  Annette took her time cutting and grinding this and here she is nearing the finish line with a gorgeously stunning window. 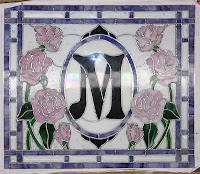 Here's one of two beveled borders that Robert wrapped and then pinned down to a board.  He's having a large bevel made for the inside of this (and the second one that isn't pictured) and I think the bevel centers have been created judging by his text message to me.  We're possibly going to see this soldered next week.

And this is another pair of Door Inserts that Robert is making.  We were short four  3/4 x 4" bevels so Robert has filled their opening with four  1" x 4" bevels to give us an accurate size so the center of this can be cut in the weeks to come.  Rest assured that those oversized bevels in the center of this WILL be replaced with the correct bevels as soon as they come in.

Shawn has tacked her arms together (that sounds odd) and she's begun filling in her background.  She wanted something clear but she also wanted something that you couldn't easily see through.   The granite backed glass that she picked is perfect for this application. It won't be long now.

Shelley's Circular Mermaid is all set for solder.  All this missing pieces have been filled in and she even got her round zinc channel attached.  The soldering should go fairly quickly on this and, dare I say it? There's even a chance that this will be completed upon her return. 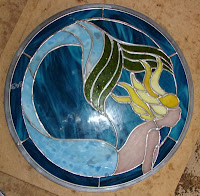 MiMi's well on her way working on her 13th Hexagon/Hexalong Window.  Alas, that '13' came into play this week as MiMi managed to drop two (or was it three?) of her pieces onto the hard cement floor of the shop.   They didn't break, but it's interesting to note that this is the first time (I think) this has happened in the making of all of her previous windows. Leave it to unlucky number 13. 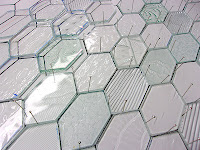 Linda L spent the day wrapping glass so that she can tack this second beach Scene together and then cut the 'missing' red crab into place.  This one is close to completion and will be finished before you know it, but not before it gains a small crab in the center of the sand. 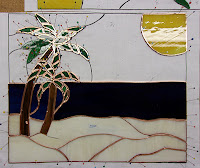 And there you have it.  See you again next week when the finished windows will all be different and then works in process will be even closer to being completed.
Paul
Bayou Salé GlassWorks