A Deep and Vibrant Significance Is Reflected in her Art Form

This is the 4th and final Oil Scope wand in the set that Roxie cut out a few weeks earlier. They're easy enough to make but there's a lot of extra work that you don't really see when you look at these. The stands take extra time to make and then there's the added steps of assembling the double sided mirrors and then affixing the mirrors to the inside of the scope. And you can't finish the body of this until the mirrors are in place. So it all boils down to a lot of work. But completely worth it in the end. 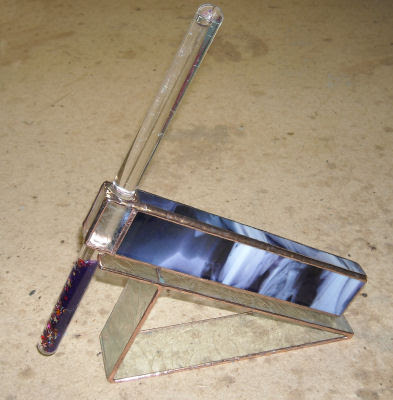 Here's an example of the ever shifting view that you see when you look inside one of these Oil Scopes. It's sort of like a firework show with no pauses between the bursts. 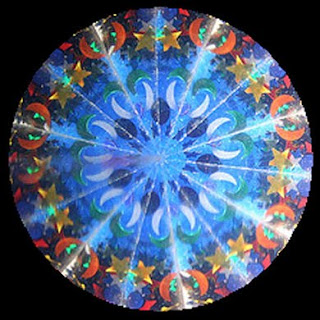 Terry was hard at work on a Pittsburgh Steelers Logo that she drew up. She's going to have this one completed next week without any doubt since she has this all ground and almost completely wrapped already. Terry's a real go getter! 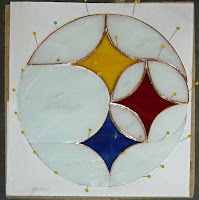 And Janice isn't wasting any time on her new set of windows either. There are going to be 3 sets of 3 windows in the series. All will feature various colored flowers with twisting vines connecting them. The beauty of this pattern is that although they will all be similar (because of the flowers) they won't be identical. Janice is working on assembling all her flowers before she starts cutting the backgrounds. Once these start to go together they'll go quickly. 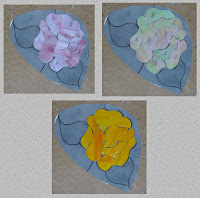 Graces Wedding Plaque is looking great. She has the lions share of the work completed and all that's left is joining everything together with the border now. Next week we'll add the actual Invitation and the picture of the Bride and Groom. 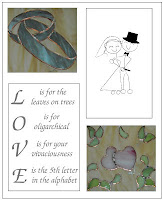 Here we are. This is the home stretch now and this window has REALLY come together. Everything is in place and the final channel has been added. The front is soldered and the back is nearly completed. Anita will be moving on to a new project very shortly now and I think that this window shows that all the time you put into a project really makes a stained glass window shine all the more.

Next we get to take a look at the new version of the lower duck in Frans Duck window. The colors were off in the first one she did and rather than saving 5% of the feathers from the other one it was easier to just redraw a new duck with the correct feather placement and then remake it with the proper colors. Now that this is cut out she'll just have to grind it, wrap it and tack it all together.

Patty had a few bevels hanging around and she decided to make a few boxes out of them. Here's a look at the bottoms of her boxes without the tops attached yet. That part will come next week. Roxie liked the look of these so much that she's about to start making a few of her own. I have to say that once you start making stained glass boxes it can be hard to stop. They're quick, inexpensive projects that are very functional. And they make great gifts! 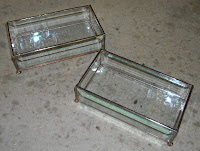 We've got new students arriving shortly and we have plenty of new projects being started so come back and see what shows up next on the cutting table.