She Thought It Was A Crack In The Glass

Roxie was hoping to finish off her 3 Oil Scopes this week but making the stands really takes a lot more time than you'd expect. That said, she has her 3 Oil Scope almost complete. It just needs a stand and some soldering done which will surely be finished next class. She did a great job matching the glass body to the glitter in the Oil Wands, didn't she? 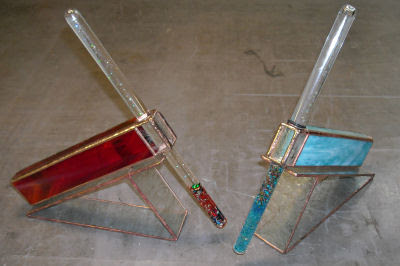 Terry's Stylized Fleur De Lis window is complete and ready to hang. In the end she went with 2 different types of Root Beer Brown for the accents and the borders. I think the mixing of the 2 glasses helped give some separation to the border and the fancy over sized corners. It's a subtle difference, but I've found that subtle differences are the ones that hit you on an subconscious level and work best. No matter how you look at it this window is a keeper. :-) 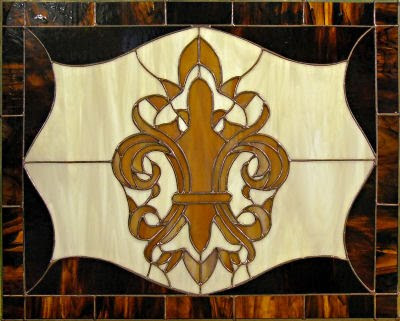 Janice completed her standard Kaleidoscope in just 1 class. I have to say that the camera angle on this is a bit odd. There's a second leg hiding JUST out of sight behind the image wheel. These 2 legs are what keep the front of the scope raised so the wheels aren't holding the body up at an odd angle. Although this is far easier to make than the Aeroscope the view inside is identical. 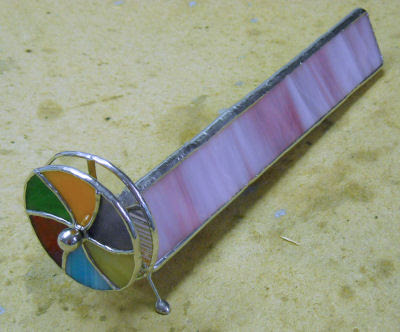 Meanwhile Grace began working on her Wedding Plaque. Rather than making a box she went with a larger design that has both the actual invitation and a picture of the bride and groom on the front along with two small stained glass scenes. Here's the basic layout. 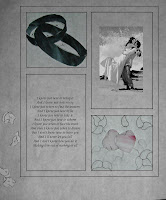 Ok, Anita is IN the light at the end of the tunnel with this rather large undertaking. It's all tacked together and all the missing pieces have been filled in. The border is cut and the front has a good deal of the soldering completed. This is almost finished!

Myrt's Bumble Bee window is moving quickly. Her next step is to cut out a background and then this window will be ready to bee soldered. 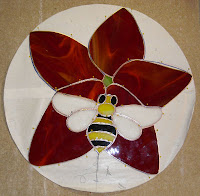 And lastly we have a look at Frans Duck window. She has a rising (or setting) sun in a orangy yellow sky. Alas, she's decided to change the sky and redo the bottom duck with different colors so expect to see some major changes to this window before it's soldered. 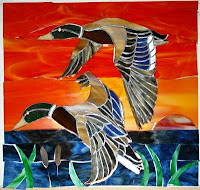 So that's where all of our students stood on the 3rd week of March. The forth week will be coming up sometime during the weekend so keep your eyes opened.