Anita has been keeping her nights occupied by making sun catchers in her spare time. She's made a cross or 2 before and now she's made her own version of a stylized cross. I like how nicely she got her gold diamond points to fit in the "wooden" parts of the cross 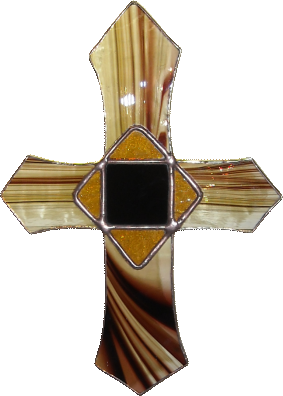 And here's a Fleur De Lis that Anita also made one night while she was at home. She always has 2 or 3 projects going on at once so we never know what we'll see next when she comes in. 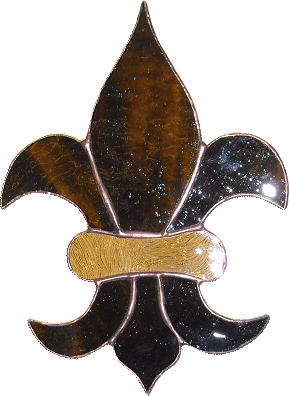 And speaking of not knowing what we'll see next, well Denise hasn't stopped making glass and she surprised me with a few pictures of items she's made lately. And this Angel Cross is one of the finished projects that appeared in my email. We'll be show casing a few more projects by Denise in the next few Blogs updates so you can see what she's been doing at home. 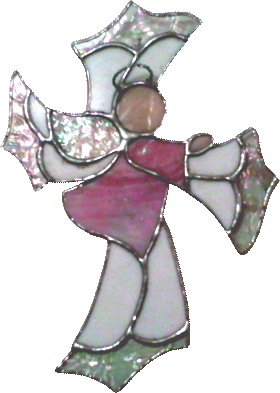 Denise also sent along this Teddy Bear sun catcher that she made. She's another one that doesn't stop for a break. :-) 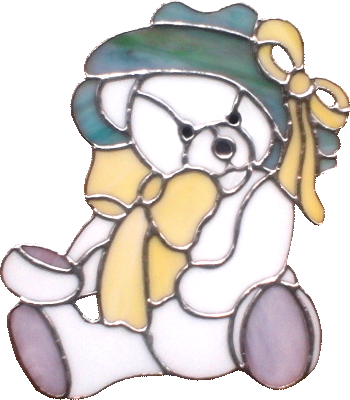 Susan still has the Hand Mirror Fever and this is the latest one that she's been working on. The good news is that it's almost completed. I'd say it's got about a week left to go before someone gets to look into it and ask who's the fairest of them all...

All of the glass is cut and ground and only the last green border has to be wrapped before Fran can pretty much call this a completed project. There's still the soldering, of course, but Fran hasn't had much of a problem handling that on her own. A few touch ups in an area here or there and she'll be able to take this home and begin her next project.

Terry's Lion Window looks incredible. This thing looks downright ferocious so I'd say that she managed to capture the fighting spirit of LSU , wouldn't you? Then again, all of Terry's projects come out pretty darned perfect. I guess you could say that "They're Grrrrreat!" (Oops, wrong tiger!) 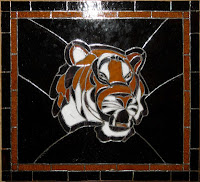 And let's not forget about Myrt's Flower/Dragonfly Window. As you can see she's got this flipped to the back side now which means that she pretty much has this window in the bag, so to speak. I like the way she took the initiative to change parts of it on her own and I can't wait to see it lit up from behind. I'll bet you can't wait either.

Peewee's latest Fleur De Lis window is also close to completion. All this needs is some solder and it will be hanging above a door in Peewee and Dianne's house.

Pam worked on a Fleur De Lis of her own this week. She's always coming up with her own patterns and walking in the door with projects that she's started at home on her own. She's certainly a lot more confident now and no longer afraid to tackle anything. Like so many other windows this week, this one just needs some solder before it sees the light of the sun. 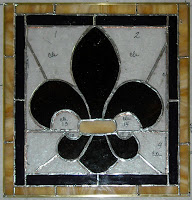 I remember when Cindy made this window as her first project. When it was finished she put the pattern in the drawer thinking she'd never see it again but here we see she's not only working on it yet again but she's almost got it halfway completed. And the funny thing is that she has another one to do after this is finished! Never say never...

Lastly we'll take a look at Ann's two cabinet windows. We assumed that they were the same size but it turned out that there was almost a half inch difference in the width between the 2 of them. Luckily we had room on the sides to take off a bit here and there to make one slightly smaller. I must say that luck was with us because if she had cut out 2 of the smaller versions we would have had to recut all the edge pieces on one window to make it larger. At any rate, they're both ground and sized perfectly now. She's got one almost completely wrapped and the other isn't far behind so working on soldering these will be the next thing to do... 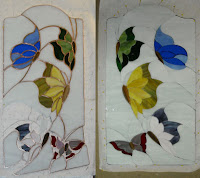 Wow, I can't believe how many windows we looked at that are so close to completion. I think we're about to see a lot of projects headed out the door for the last time very soon now.