Time For A Break

Terry's LSU Tiger Window is really something else. From the design to the colors and especially the workmanship, this window is hard to knock. The outer border is the same as the background glass and the only program she had making this was that 5 of the border pieces got cut out of an EXTREMELY dark section of the glass and looked completely out of place. Everything looked fine until we held it up. We all knew that something had to be done and Terry had no problem changing the 5 pieces within 15 minutes or so. All in all, a job well done. 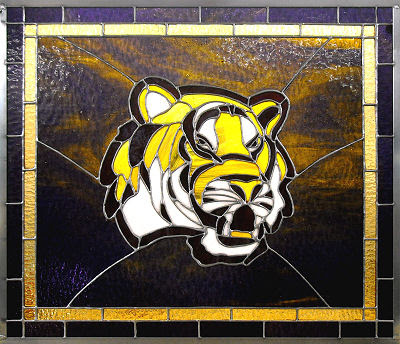 Peewee has completed his latest Fleur De Lis Window and like the others this one is perfect. He still has either two or three left to go before he can retire this pattern. At this point in time I can't really recall how many he's done already but rest assured you'll see at least 2 more of these.

Susan's latest Hand Mirror has been completed. She's altering the design of the hand mirror and has come up with a new pattern which you'll see in the next Blog Update. It's not that she doesn't like this pattern, she just wants something that goes together a bit faster than this. Looking at this mirror I'd say that she's mastered the pattern for this one. 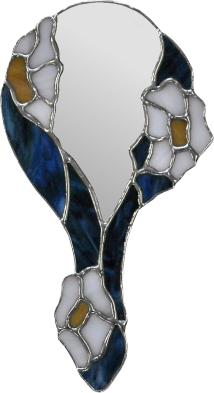 Next we get to take a look at Denise's latest Fleur De Lis. It's her own design commemorating the winning season that the Saints had in 2009-2010 right down to their Super Bowl victory. The XLIV is cut from mirror and really doesn't show well in the picture but you can clearly see Denise's attention to detail. 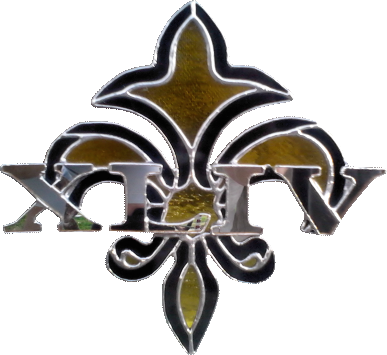 Roxie has her hand mirror all cut out and it's ready to be ground. Everyone loves the color scheme of this mirror because it's a completely different take on a familiar theme. It's amazing how much colors can influence a pattern.

Whoa! Look here! The border is cut, ground and wrapped on Patty's Seafood window. This means that all the glass has been cut for this and there's only soldering left to do. Since Patty was dealing with such tiny pieces she wrapped this in 3/16ths foil which means that the soldering process should go nice and easy. This one has just 1 more week left in the shop because when patty returns this should be completed!

What a boar. Donkeys and Tigers and Boars, oh my. This place is starting to look like a glass menagerie! We've also done a Moose, and Elk, a Cow, and too many birds to even shake a glass cutter at. Cindy's got the 1st of her 2 latest Boar Head Windows almost completed now. She'll be making these in her sleep next!

And since Terry completed her Tiger Window she started on this VERY fancy Fleur De Lis window. This from the woman who says she doesn't like making Fleur De Lis'! in fact, for accents she plans on putting smaller FDL's in the 4 corners of this window! Just imagine what she'd be doing if she loved making Fleur De Lis! Honestly though, this is a very nice design with a lot of work involved in it. The tricky part is keeping the diamonds aligned after you start foiling them and things start shifting. But I have no doubt that Terry will prevail! 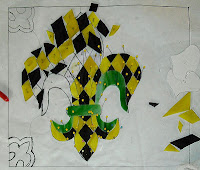 We're almost caught up now. I believe there are only 2 postings to go before we are caught up with things up to the first week of classes in February. And my New Years Resolution is to keep this Blog current! (Of course I just made the resolution now on the last day of January so does it really count??)