She's Got a Tick In Her Eye (And She Don't Care)

We're late with this post yet again but this time I have a good excuse.  We had a Weekend Workshop which through Frisday, Saturday and Sunday out the window since we had some rather full days both prepping for and then actually holding the Weekend Workshop classes. 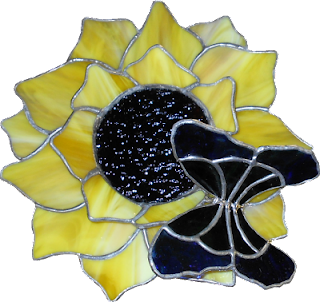 And here's a look at Carol's Sunflower Lawn Ornament.  Hers may not be swarming with butterflies but it's gorgeous just the same.  We've seen these done with leaves underneath them and they're nice as well, but you can't go wrong with your basic sunflower. 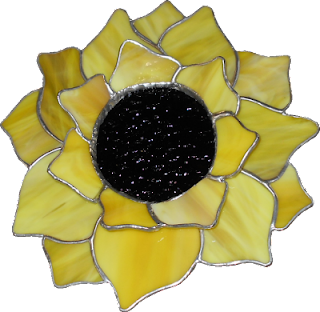 And Shelley did a GREAT job getting her Bird and Flower Window all ground. We did discover one unfortunate fact though.  It appears that one of her pieces lost a corner that is far too big to just fill in with lead.  I've highlighted it in red in the picture so you will be able to see what a wonderful job we do fixing it without re-cutting the large background piece (that we don't have any more of.)  The solution is really simple-- We're just going to add a new leaf.  Check it out next week to see how we alter patterns 'on the fly'.

Natalie's Crab Window is all ground and wrapped, ready to be tacked so she can get some background glass cut for it.  With the lions share of the work on this window completed I'm amazed at how quickly Natalie has pushed through it.  There's not much left to go before this will be completed.

Becky S's Octagon Irises are turning out beautiful.  The hardest parts are already cut out now and there's only one Iris left to grind.  After that the rest of the pieces just require simple, almost straight but flowing cuts to complete. And I know Becky is able to handle that without even breaking a sweat. 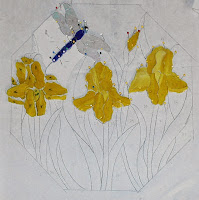 Betty's Geometric Window is moving along at a nice speed and her attention to detail is already paying off.  She's re-cut 2 pieces that most students would have considered to be acceptable but that I was on the line about.  Trust me when I say that Betty's willingness to re-cut a few pieces will make this a window of perfection.  It's always good to see someone put a few more minutes worth of work into something to make it correctly rather than always regretting small faults in the window. 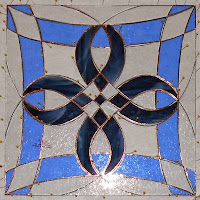 Terry's Opposing Forces Window is tacked and ready for some background glass to be cut.  We've already laid out the two toned border pieces and have them cut to the proper width so again, Terry is ahead of schedule here.

Carol's STNIAS Window is just about completed.  We've used a heavier Zinc Channel to ensure stability but Carol wanted to check out some more of her soldering and took it home to accomplish that.  Expect to see this window completed when she returns.  She also started working on a geometric window that I've made numerous times.  It's always been one of my favorite patterns and I have no doubt that Carol's will turn out just as nice as the others before hers.

Becky B's Bird Of Paradise Window involves a beautiful flowing secondary background which adds so much to the window (not that the Flowers aren't pretty by themselves mind you).  However, we may play with a border on this one.  I have idea's that I feel the need to share with Becky. 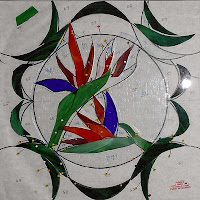 Mickey Mouse is all wrapped and fitted together.  That means that Jeannette will be tacking this and adding her border when she comes back in.  Mickey is going to have a lead tail and Jeannette will see how that's accomplished when she returns.  The tail is so thin that half of it will be covered in lead anyway, so why not go the distance and make it entirely out of lead.  Besides, it will be fun!

Brenda has one of her Fleur De Lis Windows completed (the one in gold) and another one started.  The completed window just needs to be washed and colored while the red one simply needs to be ground and then 'borderized'.  I wonder if anyone has noticed that Brenda can knock these out faster than most students can trace out the pattern onto poster board!

And Cindy resumed work on her Tri-De-Lis window and her colors are perfect.  I think that when this is completed Cindy will even impress herself with this one.  I love how perfect her grinding is which will make this window so impressive.  It's called flawless execution. 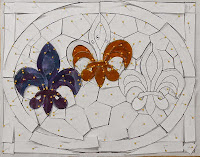 This week also saw Linda L get a good portion of the clear water glass background glass cut for her Wild Things Window.  Looking at this picture shows me how far Linda has come since she first started classes with us.  Her attention to detail is wonderful and when she sees a problem with a piece she just sticks with it until the problem is gone.

Sue got the top and bottom borders cut for her Featherized Window and you can really see it taking shape now.  She decided to add little accent pieces within the border and once this is tacked together she'll move on to adding the border to her final section.

Martha ground and wrapped her Cardinal Suncatcher while she was in this week.  All he needs is a little tail and he'll be just fine!

Janet got the first side of her Melon Window completely soldered and then started working on the back side.   There's still some wire work to do on this but I don't think that will take long at all.  This project is the perfect companion to her Peach Window that she finished a while back.  And since they'll both be hanging in her kitchen that's a very good thing. 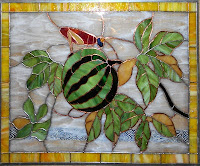 Rowena's Baseball Window is ready for solder.  Play Ball! All the glass is cut and ground with only the border left to be wrapped.  We'll put a heavier Zinc Channel around this window and it will be finished before you know it. 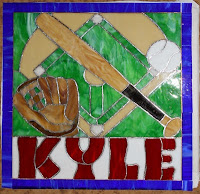 Susan's feeling very patriotic again and is working on a new Flag Lawn Ornament.  It's cut, it's almost completely ground, and it's almost finished!  Expect to see her working on a scarecrow after she completes this project next week. And speaking of Flag Lawn Ornaments, Mary Grace has one under construction as well.  She's got hers all wrapped and now it's tacked together as well.  Then she also managed to get the background cut and tacked into place on her Fruit Bowl Window.  She has her first red border cut and will be adding a final clear border when she returns to class.

Look out, it's Elsa!  Even though she has no face (female Disney characters nowadays have huge eyes, extremely tiny noses, and even tinier mouths which make doing them in glass impossible).  But there's no doubt who this is and I think she's going to make someone very happy. We're even talking about getting a snowflake in her hand.  How cool is THAT! Get it?  Cool?  Yikes! 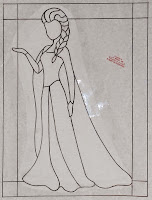 So as I said in the beginning of this tome, we've had another Weekend Workshop this past Saturday and Sunday.  Things went great and you will be able to read all about it in our next update sometime during the weekend