What's with all of the different fluxes out there?  Well, I've just about tried then all and I've formed an opinion that I'm going to share here with you.  I base my preference on my years of experience and the fact that when students use flux other than what we sell they ultimately have a bad soldering experience.  I believe the most popular fluxes out there are Blu Glass Flux and Classic 100 Gel Flux which are not easy to work with.  Hobby Lobby carries these so the fact that they're readily availability is what I largely believe is what's made them so popular.   I prefer to use Glastar Glasflux.  The difference between Glastar and the other fluxes are astounding when forming a smooth and even solder line.  When I'm repairing something was was soldered poorly I'll use the Classic 100 Gelflux ONLY so that my lines will match the other lead lines and not 'outshine' the work on the rest of the repair.  Consistency is what we're striving for and in the 35 years I've been doing stained glass I've found no flux that comes close to Glastar Glasflux.  If you're one of my students I not only recommend but insist that you use this brand.  (And no, I'm not getting a kickback for that!)

Onto our students now.  Janet's Melon Window is officially completed and, like on her Peaches Window, the wire work that forms the spirals adds so much to the finished design.  Don't get me wrong though-- her work on everything from her glass cutting to her soldering is far above average. Yet she's strives to be better with each passing week.  And she puts up with me which is REALLY saying something! 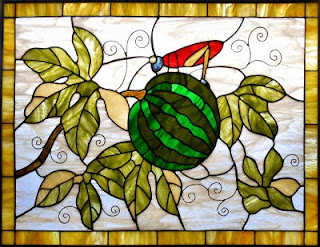 Terry finished her Geometric Window which is another pattern that she came up with on her own.  She started with the bevel cluster in the center and then worked outwards from there. The four square 2x2 bevels in the corners helped Terry change this from a circular window into a square one. 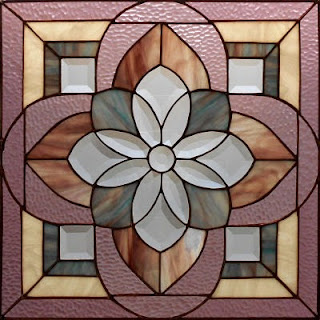 And we're pleased to announce a new student this week.  His name is Charlie and his butterfly says it all.  I was most impressed with his ability to cut nice smooth curves without making sudden changes in his cutting angle.  That's the tricky part to cutting which most students seem to have the most trouble with early on.  Charlie will be working on a few windows to fill in the opening for a piece of furniture that is being made as you read this. 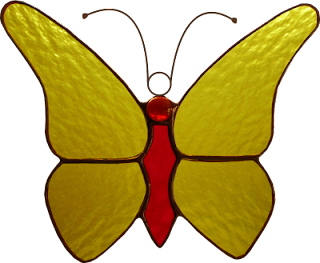 Carol's Kaleidoscopic Window is an exercise in precision cutting.  All of her glass is cut and ground and this window is just about ready for some solder.  I think everything lines up beautifully  and when this is hanging I think that Carol will surely agree. 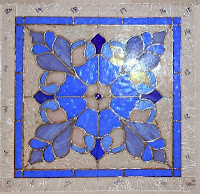 Brenda's Stylized Cross is two classes into being made and it's already taken shape.  Once the background and the corners are ground and tacked into place Brenda will cut a border and be ready for solder.  This is another project that Brenda seems to be flying through. 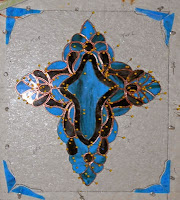 I was amazed when I saw how far along Cindy got with her window by the time class ended this week.  She got her all of her background pieces cut and ground and her oval border is cut and ready to be ground.  Cindy isn't sure what she'll be doing with her final border but I'm leaning towards a mixture of purple and green.  We're going to throw this into Photoshop and see what it looks like with various color combinations before we actually cut glass.  It's the safest way to handle this situation. 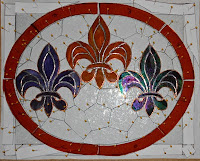 With only background glass left to go I'd say that Becky S has this well under control.  Her subtle green shading of the leaves stands out perfectly against the bright yellow Irises.  It's no wonder this is such a popular pattern-- there are so many ways to go with it!  Next up Becky will start wrapping these pieces and tacking it together before she cuts into her background glass. 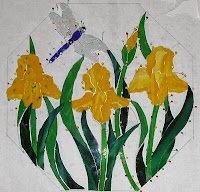 Janet also managed to work on two Lawn Ornament Bees (which are stacked on top of each other in the picture).  The bodies are all ground and that just leaves the wings which will surely take less than 5 minutes to do all eight of them.  Then she only needs to cut 4 eyes and she'll be set to bend those bodies and wings!

Susan's working on a Lawn Ornament of her own and it's one we haven't seen in a while-- The Shrimp De Lis.  She's got this all cut out and will begin grinding it when she returns.  I must say that it looks like it's fitting together nicely before she's even started her grinding. 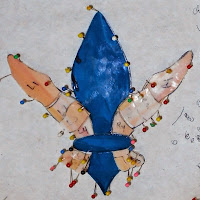 Jeanne's newest project is another Fleur de Lis Beveled Window.  She started by making a border out of pencil bevels.  The inside glass will be cut to fit inside her border.  Beveled borders HAVE to be done this way because bevels only come in certain sizes.  You can't just cut out a square or rectangle and make bevels fit around it.  It's a limitation but it's easy to work around if you know about it from the start. 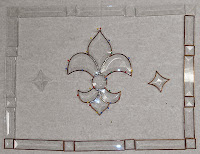 Terry's newest window is an Iris (again of her own design) and she's used a piece of purple glass that is absolutely beautiful.  The only problem with the glass is that there was far more white in it than purple.  Because of this most people have looked at it and then put it right back in the rack.  But Terry had a unique way of looking at it and decided that even though it contained far more white than purple, she could use it to make something spectacular  And look at what she's done.  By carefully positioning each of her pieces Terry's transformed what most people thought was a piece of glass that would never be used into a stunning work of art. 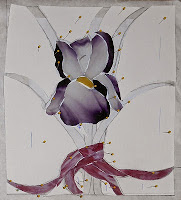 Shelley's Bird and Flower window is ready for its border.  She had a small break in her background but we just added a fourth leaf to the flower and used the glass that the leaf displaced to fill in the small missing section of the background.  Rather than re-cutting a large background piece with glass she didn't have she was able to fix the problem by adding a small scrap of green glass.  Perfect.

Sue's Featherized Windows are really close to completion now.  Everything has been attached, including the brass channel which means that Sue has begun soldering one of these already.  With a good portion of the front side completed I'll bet that we see one of these windows finished in our next update.   I liked the fact that Sue was willing to change the border layout. It takes nerve to change things up at this stage in the game but if you aren't happy with it on the table you certainly won't be happy with it when it's in your window.

Ann had all of her flowers cut ground, wrapped and tacked together.  We took the time to cut out a piece of poster board to the size of her back ground and then laid her completed pieces on top of the poster board and traced around everything with a pencil..  This gave us pattern pieces that EXACTLY match the flowers and stems that Ann had completed.  She cut up the paper pattern that you see in the picture below, traced them onto glass and then cut them out. 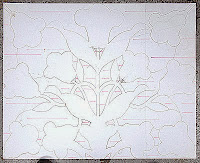 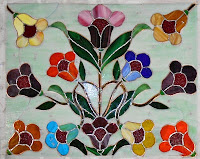 Martha's got two projects going on at the same time.  Her Magnolia Window is almost all wrapped now and once that part is done she'll be able to cut her border.  And her Cardinal window has it's bevels tacked together and is now waiting for it's five background pieces to be cut.  I guess you can say that Martha is burning the candle at both ends!

Gale's back and her Soldier Tribute Window is ready for borders.  She got it all tacked together in class and decided to finish this off with not one, but two borders.  She's picked a thin inner border of army green and will finish it off with a wider border of brown.  She's taken the rest of the green pieces home with her to wrap so I'm sure she'll be soldering this when she comes back in. 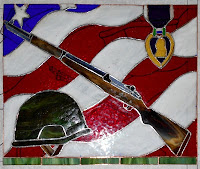 Myrt took a quick break from her Outhouse Window and came in with the center of a Stylized Fleur De Lis all cut out.  She wants to make it smaller than the pattern but she wants to also add another border to it as well.  And, as you'll see, that isn't a problem at all.  She tacked her FDL, she added the background glass, and then she cut a thin inner border.  Next week she'll add the last border and then start soldering. 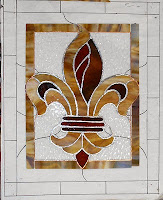 Check it out!  Linda L's Wild Things Window is all cut out and her final border is ready to be skimmed, wrapped and tacked.  All of her hard work has paid off because, as you can see, it looks great already.  And it hasn't even been soldered yet!

Jane's begun working on this large oval window of Roses and they're going to be a colorful assortment.  She has the flowers cut out already but I wasn't quick enough with my camera to get a picture of the glass laid out on the pattern.  So I guess you'll just have to live with looking at the pattern itself.

Ok, so this brings us pretty much up to date.  We'll have another timely post on Monday or Tuesday and we'll finally be back on schedule here. See you then!