Well, we're late again, but I can explain- really.  This post is a week behind due to a hard drive melt down on my computer  I lost about a months worth of posts including the pictures that you'll be looking at in this post.  Luckily I was able to recover them by running an un-delete program on the camera's memory card a few days after I got my computer up and running again.  So, without any further ado, here's what happened in the shop two weeks ago (not last week).

This is Betty's completed Geometric Window.  She loved the flowing design when she first saw the pattern but wasn't really thrilled while making it only because it turned out to be a bit harder than she'd thought it would be.  On a flower window it doesn't matter if a line moves up or down an eighth of an inch but in a window that's based on symmetry along 2 axes (yes that's the correct spelling-- I looked it up), well that's a whole other ball of wax.  Precision is the word when making a window like this and as you can see Betty did wonderfully! 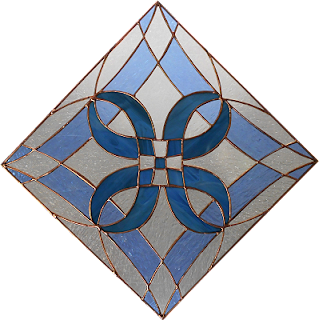 Carol's Saint's Fleur De Lis Window may only symmetrical on one axis but it's perfect no matter how many different ways you look at it.  Lettering can be another problem to work out in glass because you certainly don't want sloppy hand writing in a window.  The Saints letters look great and Carol has walked out the door with yet another masterpiece. 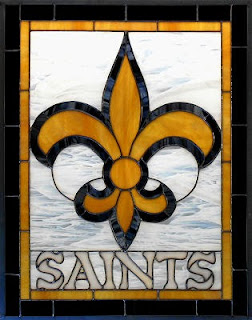 Terry's Opposing Forces Window is finished and you're getting a look at it only because her daughter Rhonda happened to snap a picture of it and sent it to me so I could include it in this post.  Un-delete programs are apparently not perfect if you've taken other pictures on top of the old ones.  Terry did another great job with this window and we've come to expect nothing less from her. 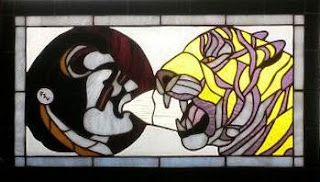 Jeanne completed her Winnie The Pooh Window and it's certainly going to bring smiles to peoples faces when they see it.  Her extra leaves fit in seamlessly and Jeanne managed to made a perfect window even though she battled a bum knee throughout this projects entire creation. And the grain in her sky lines up perfectly all the way across. 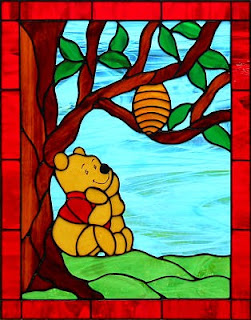 Linda F's Celtic Knot Logo is even more impressive when you see it in person and realize that it's only 9 inches in diameter.  Small pieces are never fun but small symmetrical pieces are even worse.  But, like Betty, Linda managed to work through it and make it look easy.  She claims it's not very round, I say she's crazy.  :-) 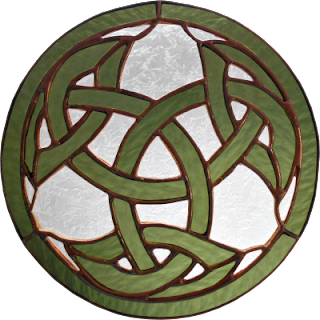 Susan's American Flag Ornament is finished and ready to be staked in her garden.  Most people assume that a flag is easy to do in glass because you can make one with nothing but straight cuts.  But that would be a rookie mistake because straight cuts bend easily and fall apart quickly.  Susan avoiding that problem by making her stripes with curves so the entire flag is sturdy and ready for any punishment that mother nature dishes out on it while it's in the weather. 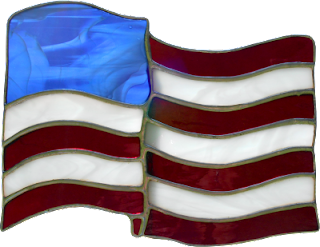 So next up we're going to take a look at Carol's next project.  We like to call this the Kaleidoscope Window (for obvious reasons).  Again, precision cutting will be extremely important to maintain  the mirrored view so it doesn't become twisted and distorted.  Carol has most of this cut and ground and will be wrapping and tacking her inside pieces before she resumes cutting the final background pieces and the borders. 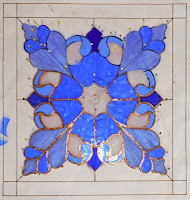 Becky S's Irises and Dragonfly are really taking shape now.  The flowers are ground as well as the dragonfly so Becky has moved along onto cutting the green glass.  With her stems cut and ground she'll move over to the leaves next.  Becky will be doing something a little differently from the other windows we've seen made from this pattern but I won't tell you what it is until she begins cutting the glass for the newly changed section.  Are you curious?  Then make sure you come back to see what Becky has planned. 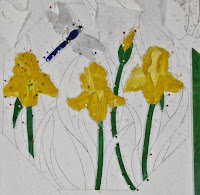 Cindy has three of her Fluer De Lis' cut, ground, and almost wrapped in her Tri De Lis Window.  She'll be working on cutting out her background next and then this window will fly!  I feel the need to state for the record that Cindy's cutting and grinding has hit a new plateau.  These are perfect. 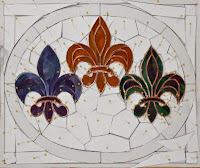 And Becky has the center circular portion of her Bird Of Paradise Window all ground and ready to be wrapped and tacked.  Tacking the center circle section will prevent anything from shifting as she cuts and grinds the background pieces that will turn it from a circular window to a square window.  She's decided to take my advise and add a double border to make it look more complete and less empty around the edges. 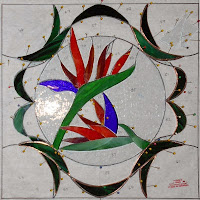 With only five pieces left to go (and then the borders), Myrt's Outhouse is looking better than ever.  I know you can't see the detail of the wheelbarrow's wheel in the picture below but it worked out perfectly.  Oh, and the bottom strip of green is just a piece of glass that we're using as a straight edge to ensure that the border will line up nicely.  Just wait until the sky has been added to this.  It's really going to come alive.

Mickey Mouse is all tacked together and his front side is mostly soldered at this point in time.  And the best thing is that his lead tail turned out perfectly!  There's glass under that tail but it has been completely foiled over so we could solder over it without breaking that tiny, thin, long piece that would surely break if it were made the normal way.   Just wait until you see this completed and hanging up.

With her borders attached Mary Grace is ready to solder her Fruit Basket that she's been threatening (and fearing) to make for the past few months.  We held it up and the color of the basket is much lighter than you'd expect when you see this sitting on the table (as Mary Grace already knew).  The inner, thin border is cut from red water glass and when this has light behind it, well, look out! 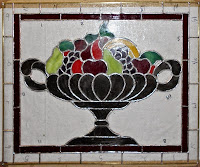 Now that's a lot of flowers!  Ann's Flower Bouquet Window is tacked and ready for its background.  This is a large window measuring almost three feet across but the background will cut fairly quickly since we've remade pattern pieces for them by retracing all the flowers onto some poster board.  And Ann will be cutting these pieces when she return to class. 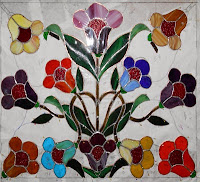 Subtlety.  That's what Bonnie's Elsa Window embraces with it's two tones of blue which are VERY similar.  The lighter blue helps give the illusion that the 'cloth' is more sheer than the dress and that's exactly the look that Elsa needs.  When this is lit up the effect will be readily apparent. 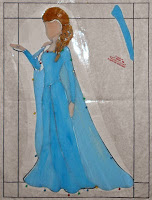 Terry only needs to add some brass channel to the edges of her Geometric Window and then solder the backside before she can call this completed.  It's nearly out the door already and I know that it will be completed in our next update because I already have a picture of it on the camera! 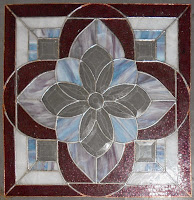 Sue has both of her windows almost completely bordered now and will double check the measurements before we tack the side borders into place.   The most perfectly created window will easily be ruined if it's made to the wrong size.  But that won't be the case with Sue's pair of Feathered Windows.

Linda L's Wild Things Window is almost finished as well.  She'll be working on the remaining background pieces that surround the green letters while she's at home and then she'll be ready for borders.  Pay attention to the dotted 'i' in the word 'Things' and note how there's no lead line running from it.  I'll point it out again when this is finished and explain how it was done as well.

Janet's got her Melon Window completely under control as the front side is all soldered.  And the good news is that the back side has not only been started--it's a good 90% of the way finished!  Janet worries about her soldering but I think she understands that slow and steady always wins the smooth soldering award because 99% of her soldering requires no touch ups at all.  Look to see this as a completed window in our next update. 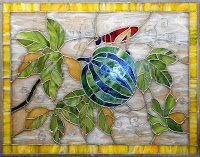 Linda F has begin working on a vibrant Multi-Colored Pinwheel Design and is ready to begin grinding it.  We used Photoshop to see how to align the colors and this was by far the best variation of the color scheme.  This is going to be nice and bright (eye catching even) when it's finished. 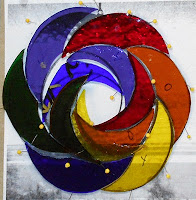 Natalie's Crab Window is tacked and just waiting for a background to be cut.  She's going to add some air bubbles as well but that will happen AFTER the pieces are cut and ground into place.  Handling it one step at a time ensures that everything will line up nicely in the end the same way that Myrt's Wheelbarrow Wheel worked out. 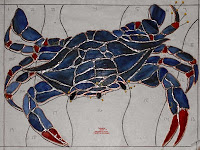 And last but certainly not least we take a look at Brenda's newest creation, a Stylized Cross Window.  She'll be making this as a two color cross and will see when it's finished that there is no 'correct' way to color a window.  Wait until you see this when it comes back into the shop (I've already checked it out).  It's spectacular! 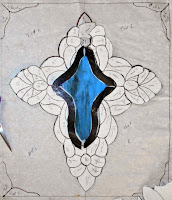 And that's that.  With classes starting again the day after tomorrow I'll need to shift into high gear to get this blog back up to date.