We had another of our quarterly Stained Glass Weekend Workshops last week and we're here now to show everyone what our newest batch of students accomplished in the short span of two days.  Two very FULL days I might add. 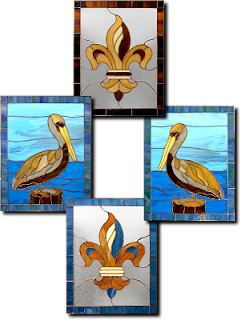 We started Saturday morning with Angie, Cherie, Roxane and her daughter Erin.  Angie and Roxane are practically old pros at this since they've done weekend workshops before but Cherie and Erin were new at it.  The first thing we did was to have a cutting lesson where we covered the ins and outs of cutting glass.  Once everyone cut out their straight lines, curves, compound curves, circles and inside curves they moved on to their official 16 x 20 projects.  Below are the first actual pieces of glass cut by out students.

Since Angie had been in class with us before she wanted to know if she could make a Pelican Window instead of one of the stock patterns.  It didn't take long to draw this up and I felt that although it was a challenge Angie would be able to handle it since she'd done this workshop twice before. 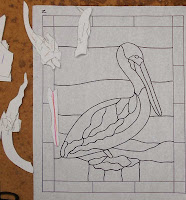 Here you can see that Angie is well under way in cutting the glass for her project.  We always like to start with the easier cuts to help boost our confidence while getting our feet wet.  Not that this Pelican's feet are in the water... 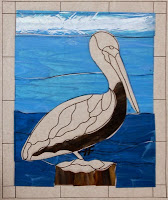 Once everything was cut and ground we sat Angie down and had her wrap her pieces before she headed home for the night.  This is what was accomplished at the end of the first day. 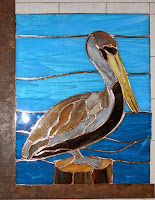 Sunday started with everyone tacking their windows together with solder and then adding the final pieces of glass-- the border.   Once that was added we broke for lunch while I put brass channel around everyone's projects.  From there we moved on to the soldering process keeping in mind that slow and steady winds the race.  And here's Angie's completed window.  This pelican looks great and we already have regular weekly students looking at the pattern! 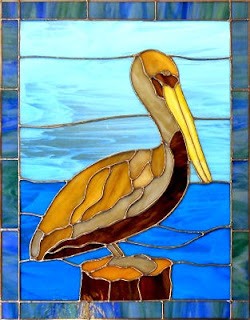 Next up we take a look at the work of one of our two new students, Cherie.  She decided that she wanted to make a Stylized Fleur De Lis so she could give it to her mother for Mother's Day.  The timing couldn't have been more perfect for that and by noon on Saturday Cherie had these pieces cut out and ready to grind. 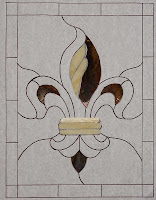 By lunch time (which ran a little late) Cherie had everything but her border cut out.  the only reason that wasn't cut was because we don't do borders until the inside section tacked together.  She has her square in place and is ready to start grinding her pieces from the lower left on upward and out. 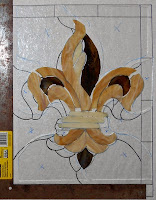 Next she wrapped all of her pieces with 7/32 copper foil after she had everything ground and fitting nicely.  It was a little after 6pm on Saturday when we called it a day. When Cherie came in the next morning she tacked her window together and began working on skimming and wrapping her final border pieces. 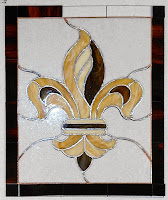 Cherie walked away with a beautiful Fleur De Lis Window and if you want my opinion I think she had fun making it (even though we punished her with long hours, and a nearly sleepless night).  She did a great job and I hope her Mother enjoys the fruit of Cherie's labors today on Mother's Day. 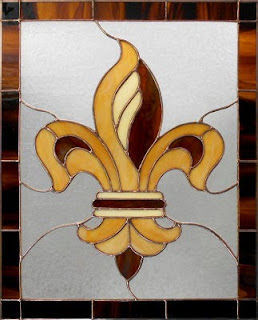 Roxane decided that she wanted to make the Pelican Window along with Angie and I saw no reason why she shouldn't  do it.   Here's her Pelican after she's worked out her first few cuts.  We took a shortcut by cutting the beak in one piece.  We split it into two very narrow pieces only after it was ground and fitting into place.  This made it much easier to cut and grind since she was dealing with a larger and more manageable piece. 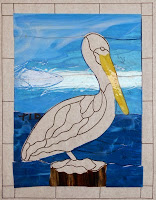 Roxane is a natural at this Stained Glass thing and her cutting, grinding and wrapping went extremely well.  Not that it was a race, but she was the first person to get her window ground and there was nothing to adjust when she walked away from it at the end of the day. 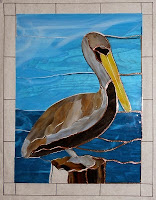 After tacking her pieces together on Sunday morning Roxane then set to work on her border.  Borders are one of the easiest things to cut if you have the center of your window tacked together.  The strip cutter allows us to cut borders that are perfectly straight.  In the picture below all Roxane needs are four corner pieces and then this window will be ready to be soldered. And here is Roxane's finished window.  The colors are slightly different from the version that Angie did, but not glaringly so.  Since I knew what I was looking for it was easy to sort out all of the pictures we took along the way respectively.  I think, or rather know, that Roxane did a wonderful job here. 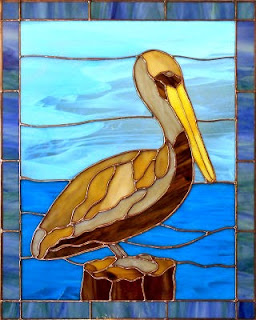 Erin is Roxane's daughter and she decided to make the Stylized Fleur De Lis Window but she didn't want to make hers in the browns and tans that we normally see it done in so she went with a color scheme of her own.   I wasn't sure what colors were being used until she actually started cutting each color so I had no clue what to expect.  Sometimes I worry about things like that but it turned out that Erin has a wonderful eye for color.  Her window already looks great with just two colors cut. 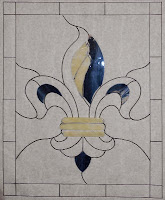 With the remainder of her glass cut Erin was then ready to begin grinding all of her pieces.  It's a tedious process and Erin drew blood on more than one occasion, but she didn't let that slow her down at all as she quickly applied a band-aid and then grabbed for the next piece of glass. 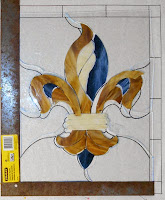 Erin's border choice really makes this window stand out.  It's stunning, don't you think?  And it's not even soldered yet in this picture. 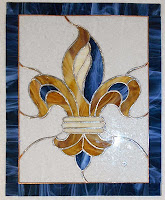 The end result is another gorgeous window whose border matches one of the accent pieces which changes the feel of the window entirely.  Erin was so sure she wasn't going to be able to solder her project but in the end she did a fantastic job and hopefully learned that there's more to her than she gives herself credit for. 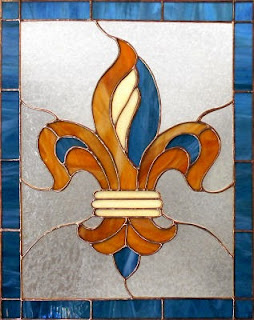 I want to thank Angie, Roxane, Cherie and Erin for a great time.  There was a lot of work involved but we all had fun making it through to Sunday evening.  Our next Workshop will be a Fusing Workshop and both Angie and Roxane will be joining us for it.  I'm learning a lot in those classes myself so I know I'm going to have a great time as well!

Posted by Bayou Salé GlassWorks at 12:23 AM