If You See The Line Then You Love To Grind


Our tip this week corresponds with our title (which might very well be a first).   When you are cutting your glass you should always be sure to stay INSIDE the live that you've marked on your glass.  The reasoning behind this is twofold.  First, the line is marked around the pattern piece and is therefore larger than the piece of glass you need to cut.  Second, you also need to get two Pisces of foil between each piece of glass which is also thicker than the line that is marked on your glass.  I know it's hard to tell yourself to do it, but cutting off your line insures that your grinding will be kept down to a minimum.   I can't tell you how many students tell me over and over that they're afraid that their pieces will be too small if they cut off the line.  It's what I do and my pieces fit wonderfully with minimal grinding.

So Betty did a little looking around and found a beautiful new Butterfly Pattern on the internet that she turned into a Lawn Ornament this week.  I have to say that her colors are exceptional and I just love seeing a new Butterfly pattern being made.  I have no doubt that students will be asking about this one now that it's posted here. 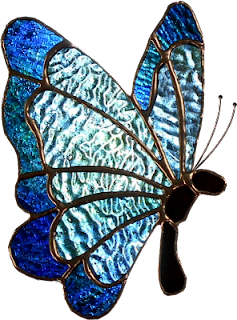 And Sue completed these two lovely Easter Bonnet Lawn Ornaments just in time for the holiday.  They've been attached to stakes and are most likely decorating her yard as you are reading this.  And if the Hats weren't enough she also managed to start and finish an incredible Easter Basket as well!  Sue never ceases to amaze me with the amount of work she accomplishes and the quality of it! 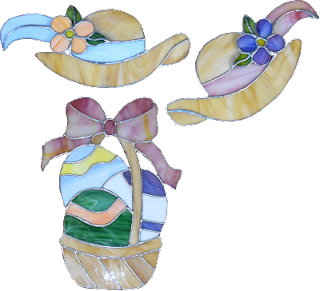 Carol completed her 3 Humming Birds and as promised they are all flying straight this week.  She also made a fourth that she turned into a Lawn Ornament and on that one she learned how to use a glass bead for an eye.   It's far easier than grinding a hole for each eye, but it can only be done on small projects or the eye 'disappears'. 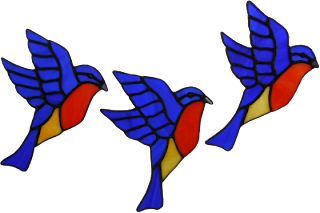 Betty also completed her latest jester which has green eyes that look much better than the black ones that I thought she was going to use.  When I asked her about them she said that she had  decided to replace them with a different color as soon as she had them in place last week.   I know a good call when I see it. :-) 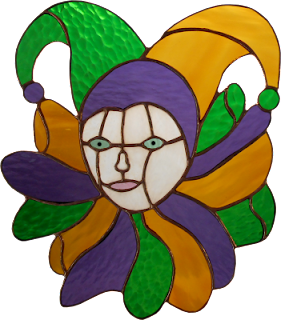 Mary Grace has completed yet another American Flag Lawn Ornament leaving her with just one more to go.  I'm going to officially state that she certainly has this pattern down now. 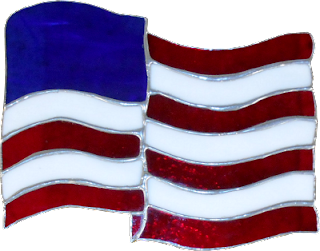 Carol not only finished her Humming Birds but she also managed to start her version of the ever popular Nativity Scene.  Carol only had a black and white picture to work with so she mis-identified a few colors but since nothing was cut yet it was very simple to fix.  She's got her colors straight now so look to see her get much further on this when she returns.

UPDATE:  Carol's water glass has arrived meaning that next week she'll be working on her final panel for the door inserts that she's been making.  Her Nativity Scene will most likely wait a week before we see it again. 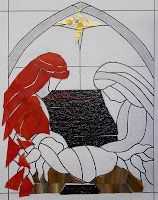 Brenda's got the border ground and attached to her JP Window which means that it's all ready for its brass channel and a coat of solder.

Rowena's window is a a story that sounds like it came straight out of a soap opera.  She gave up on waiting for her first bevel cluster to arrive and ended up ordering a similar replacement bevel about 3 months later.   When the replacement  arrived it was missing two  pieces but as luck would have it her first choice came in a week later.  She wrapped the original cluster and was about to tack it together when we discovered that it was also missing two pieces!  But it really wasn't.   There are actually two small places where there are no bevels in this cluster but we're going to fill them in by slicing a star bevel in half (which fits perfectly)  You'll see how that all works out when we return next week. 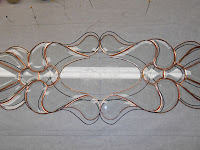 Gale came in and resumed work grinding her Magnolia Window and even got the center all wrapped in plenty of time for us to cut and size the strips for her border.  Gale will be soldering this window before you know it.

Martha took up working on her Fleur De Lis and got most of the background cut out.  This window hangs at an angle (very much like a baseball diamond) so cutting the rainwater glass required her to cut it at an angle as well or the grain would run in a very unnatural way.   It tends to waste some glass but that's the price you pay when going against the grain. 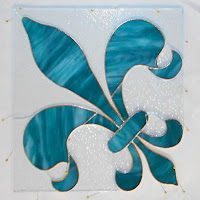 Becky S got her final baroque blue border attached to her Circular Spiral Window and adding that border made the window large enough to get a zinc channel bent to fit around it.  She has the front side of this soldered already and her soldering around the solid lead sections is even better than what I accomplished on my window!  I can't wait to see this colored so you can see the leaded sections. 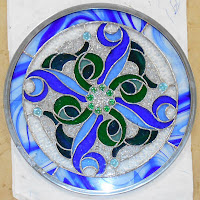 Shelley's Red Fish Window is moving right along.  She's not only got all of the water cut out but she's also begun cutting the glass for the actual fish as well and is moving along swimmingly! (Get it?)  She changed the color of the water and I have to admit that it was a good change. 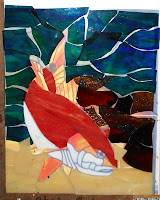 Linda F's got most of her Turkey Suncatcher cut and ground already.  I remember when Linda first started and had trouble getting her glass to flow the way she wanted it to.  Now she's capable of shaping any piece perfectly.  Just look how wonderfully this fits together. 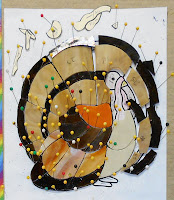 One of our newest students, Sheri,  got her background attached and then added a semi-beveled border to her window.  With all of the cutting behind her she's ready to relax and start soldering.  My tip to her is this:  Slow and steady forms the bead. 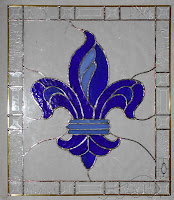 Linda L has the three Easter Rabbits she had tacked together last week all surrounded by background glass and she's even begun soldering them already.  Her borders are all cut out and ground and she plans on attaching them at home during the week.  She's got a Mickey Mouse Lamp that she's looking forward to making next so I think she'll be working extra hard to complete these Bunnies just so she can get to work on that lamp. 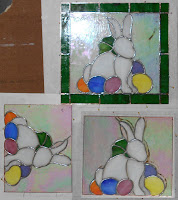 Susan's eggs are all laid out and all but one are wrapped.  One slight snag was her discovering a bag of un-ground pieces but it was a quick and easy fix for her.  Now she only has one left to wrap and she'll be moving on to decorating these eggs with a coat of lead!

Terry continued wrapping her spiral flower window and then got everything tacked together.  We've worked out the size for her borders and will attach them when she comes back in.   She'll be starting on the second, looser section of this pair soon enough. 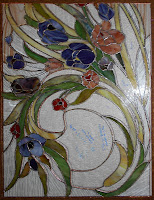 Barbara was the only person who managed to make it in to class on Wednesday night this week.  That means that we got an amazing amount of work done since I was able to focus completely on Barbara.  Her Butterfly only needs its wings joined together and she would have been able to do that if she had the easel that this will rest on with her.   Barbara just didn't think that she'd get so much completed in one class so she didn't think to bring it with her. 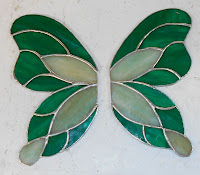 Bonnie's got her Study In Straight Lines all tacked together and is ready to begin soldering when she returns.  This is a perfect example of how important it is to position your pieces before you tack everything down.  All her lines match and everything is perfect because she took the time to place all her pieces before she tacked them.   This is the perfection that we strive for in our windows. 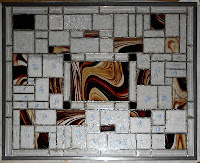 Myrt has the front of  her Cross De Lis all soldered and will flip it over to finish it when she comes back in.   This window is almost complete and Myrt has made excellent time on it!  Look to see this finished when we return with our next update. 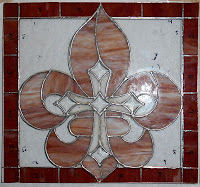 Vickie now has her geometric window all tacked together save for a thin piece of the inner red ribbon border which cracked while she was wrapping it.  It's far from the end of the world though because all she needs to do is place a piece of the red glass under her window and trace out a new piece.  Doing it this way insures that she won't have much grinding to do and then she'll add her final border. There's even a good chance that Vickie will begin soldering this during her next class. 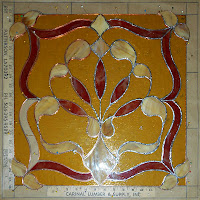 Cindy started cutting out the background glass for her LSU Tiger De Lis Window.  She also began wrapping a lot of what she already has ground so you can now see what the lead lines will look like in the top center and left sections of the Fleur De Lis. 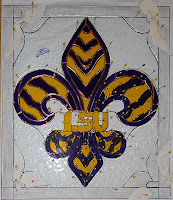 Jeannette has all of the background cut out, ground and wrapped on her Peacock window.  I knew things would go quickly once the bird itself was tacked together.  Next week she'll add the thin red/orange border and then finish this window off with a final border using square bevels tipped at 45 degree angles so they look more like diamonds.  She's changing the border design from the one that was originally drawn on the pattern but we're not exactly sure how yet.  Well see how that turns out next week.

And then lastly, Betty liked the colors in her new Butterfly so much that she decided to make the standard Butterfly Lawn Ornament using the same color scheme.  She's already got it all cut out and ready to be ground. So this will be finished before you know it. 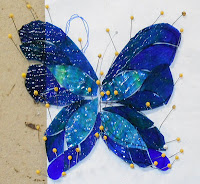 And that's it for this week.  Come back and see us again next week when we cover even more completed windows and new ones about to be started on.