We have a very important, yet quick and easy tip for everyone out there this week and it doesn't even need a picture to help illustrate it.  Before tracing around your paper pattern pieces onto a sheet of glass make sure to wipe the glass off with a *slightly* damp paper towel and then give it 30 seconds or so to dry.  You'll find that the marker lines won't wipe off nearly as easily with your fingers while you're cutting and that your marks will last longer while you're grinding as well.

Now I really love our first finished piece-- Natalie's Pelican Window was inspired by a painting that she saw and her choice of blue/green background glass really makes this stained glass window resemble a painting.  The double border certainly doesn't hurt either since it doesn't take the viewers eye away from the Pelican itself.  Natalie did a great job on this all around. 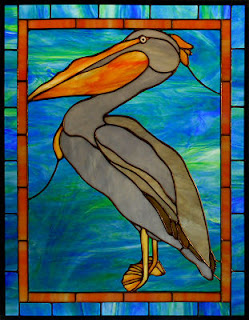 Becky B's Horseshoe Cross was also finished this week and I'm happy to tell you that her taking the time to slide the square bevel to the true center was the right thing to do.  I never really took a picture of it when it wasn't positioned correctly but trust me when I tell you that it was distracting.  Since I was the person who misplaced it you now know with out a shadow of a doubt that we all make mistakes.  Becky's soldering on this really impressed me because when you get right down to it Becky hasn't had much soldering experience with us yet.  What a wonderful project this turned out to be. 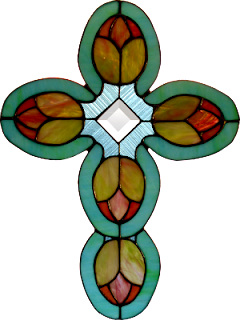 Carol only has one more of these Beveled Fleur De Lis sections to go now but when you see that one completed it will have the border on the left side of the window.   Carol's still not sure if she likes this FDL only because it's smaller than one she originally wanted to use.  Framing it with a textured glass brought it up to the correct size but it isn't nearly as wide as her original pick.  Those FDL's are still on back order so time will tell us what Carol decides to do here.  Myself, I think this looks fantastic. 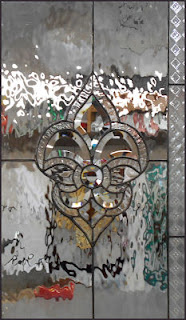 Cindy finished her pair of 3D Butterfly Ornaments and like everything that Cindy touches, they turned out beautiful.  This is a nice variation on the standard Butterfly Suncatcher which looks great spinning away in a window. 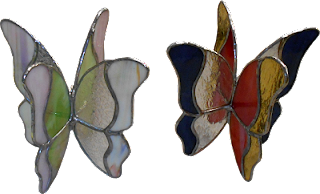 Speaking of Butterflies let's look at the Butterfly Suncatcher that our newest student, Sheri, made this week.  Sheri had never cut glass before but caught on very quickly.  She also followed the pattern lines perfectly which reduced her need to spend a lot of time at the grinder.  At the end of the day she walked out the door with this beautiful pink Butterfly.  I know we're going to see great things from Sheri and can't wait to see what they will be. 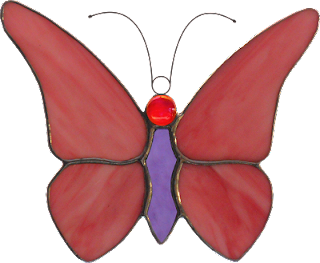 Mary Grace's second Easter Bunny Lawn Ornament shows us that she's truly perfecting her stained glass technique.  This one is much smoother and the eggs are more consistent.  She says she has one more of these to go and then she'll be done with Rabbits (until next year?) 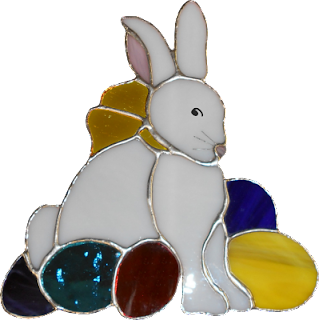 Rowena's latest Butterfly Lawn Ornament proves that she's got the construction of these down to a science now.  She always makes perfect butterflies with minimal effort. 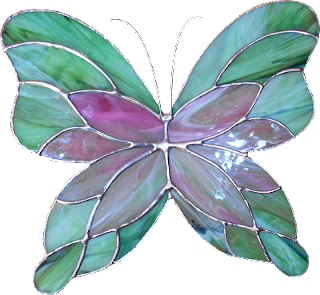 This is Betty's third clear textured Fleur De Lis Window and for some reason that I can't figure out the textures have photographed beautifully here. She's been using different texture schemes with each of these window so although they all look similar they are anything but identical. 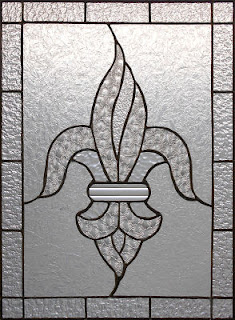 Becky S's Spiraling Geometric Window is REALLY coming together now as she has a good 75% of it ground and fitting together.  She's decided to change up the center section of this by using some glass globs but the really fun part will be when she adds the leaded sections of glass.  And it looks like we'll be seeing that real soon now. 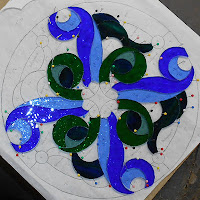 Carol also worked on this Cross De Lis Window which only needs some solder on it's back side now.  Her attention to detail is top notch and this window certainly proves that.   Hopefully we'll get to see this lit up when she comes back in next week. 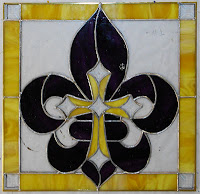 Now that Cindy finished her pair of 3D Butterflies she's resumed work on her LSU Tiger Fleur De Lis Window.  She got quite a bit completed during class this week and is moving at a nice quick pace.  She'll be wrapping this before you know it. 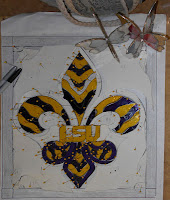 Janet's Lamp was all ground and wrapped so before she called it a night she soldered the front sides of all six of her panels.  She's taken them home to flat solder the back sides so we can tack these together and finish it when she comes back in.  This lamp is practically complete at this point in time because there are technically only six lines left to solder!

Jeannette's Peacock Window is being made in two sections that will soon be joined together because she's managed to pretty much complete the top sectioned this week.  That means that she'll most likely be cutting background when she returns.  This is really coming together now and she's quickly approaching the home stretch.

Ann is making excellent progress on her Cross Transom Window.  With the center section completely cut out she has begun grinding the innermost cross section. Before she cuts anything else Ann will wrap and tack this together to maintain a perfectly rectangular window.

Mary Grace also has two of the four sides of her Candle Holder ground, wrapped and tacked together.  She's halfway to the point where she'll join these together and once they're joined this will essentially be complete. 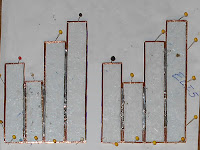 Brenda stopped working on her JP window so she could get this Cross Window under way.  With all the glass cut she only needs to grind this before she can begin wrapping and soldering.  This will be finished before you know it. 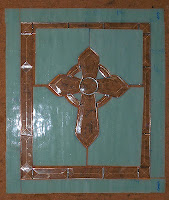 Linda L came in with her Dachshund Lawn Ornament all cut out and put together save for the front leg.  She wasn't sure if she should tack the leg on top of the body or if she should go the distance and grind out an opening for it.  In the end it was a no-brainer:  She ground out a section of the body and then soldered the leg into place as she would any other piece of glass.  The reason she handled it this way was was due to stability.  The leg would never have been firmly attached by simply tacking it on to an outside lead line and would have likely pulled loose while being exposed to the weather.

Linda also cut out and ground these two cute Baby Suncatchers as well, which she's taken home to wrap so she can have them completed when she returns.

Vickie is working on a Geometric Window and it's really coming together nicely.  She has just three more pieces of red glass to cut and then she'll be moving on to her background glass.  That background glass will be what she works on when she returns to class in two weeks. 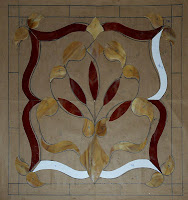 Martha's been busy picking out colors and working on her Oysters this week.  She has a few iridised pieces cut out in a very tasteful way.  This is looking great already which proves that Martha can easily hold her own when it comes to making stained glass.

Myrt's got her own version of a Cross De Lis under way and it's taking shape in an astoundingly speedy mannor!  We saw her cut and grind the cross portion of this window last week and this week she's managed to almost complete the Fleur De Lis portion of it as well as having it ground.  I'm fairly sure she'll get this wrapped when she returns. 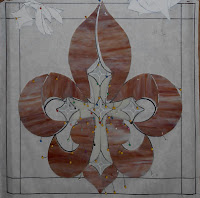 The bottom panel of Terry's Spiraling Flower Scene is pretty much cut out and she's decided to take a break from cutting and move onto grinding for a while.  It's really coming together now and it won't be long before Terry starts wrapping and tacking. 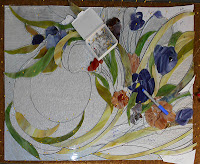 Sue's Winter Window is all ground and fitted together.  She even has the center portion of it tacked so she is ready to add the two borders on the top and bottom of this panel.  These will surely be attached next week and maybe even soldered.

Bonnie's Study of Straight Cuts is almost completely ground at this point in time and she has a great deal of it wrapped as well.  I suspect that it will only be one more week before Bonnie starts tacking all of this together.  Wrapping as you go on something like this helps prevent things from growing and changing the proportions of the window as the foil makes things expand.  It's without a doubt the way I would handle this. 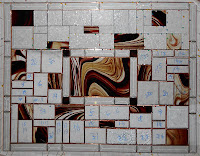 Susan's Easter Eggs are moving right along and she's even cut out a few more of them including a second variation of the hardest one with the 'teeth'.  I'm pretty sure all but one of these are ground so Susan may be assembling these upon her return. 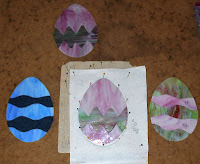 Paula is about to begin working on our famous New Orleans Scene Window that she's making some modifications to.  She has most of it mapped out and has her pattern traced out as well so be prepared to watch this scene come to life in a somewhat new way over the next few weeks. 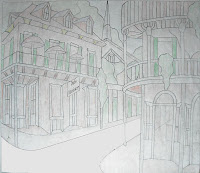 Due to the storm that occurred on Tuesday our students were flying out the door to their cars and I managed to miss getting a picture of Linda F's Cross window.  Below is a quick sketch of what her window looks like at this point in time. 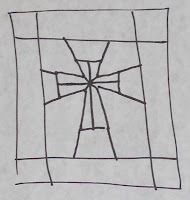 I'm sure we'll see an actual picture of Linda's completed Cross Window when we return next week so be sure to come back to check it out.