Trottin' Around The Problem

Let's Hummingbird and Flower Window turned out wonderful!  For a new(ish) student Let has just jumped into the deep end of the stained glass swimming pool and started swimming with the best of them!  Beautiful work indeed. 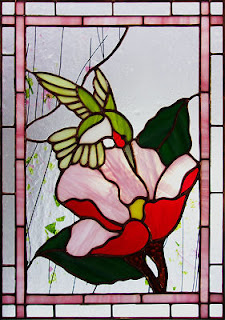 Lisa's created two feathers using assorted colors which I suspect may very well be small scraps that she might have had just lying around.  Scraps or not the end result is splendid and Lisa's work on this pair of feathers is equally resplendent. 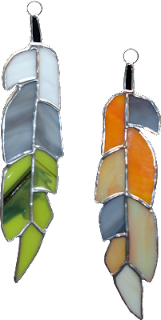 Robert is the king of the 'Transom Window' and this week he got yet another one completed (along with two others started.)  I will be downright upset if he doesn't manage to get at least one more of these completed when he comes back in.

Steve's got his first Mini Sunflower Suncatcher finished with another one pretty far along in the queue.  I've got to call out his excellent wire bending abilities as well as his skill at adding a solder drop at the end of the wire to cover any sharp ends.   He's easily got twice as much lead on his ends as I  normally apply and I like his look a WHOLE lot better than mine! 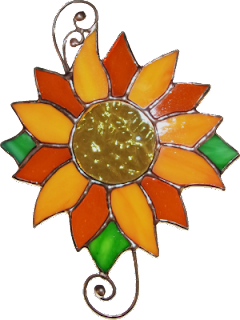 To wrap up our finished projects we look at the newest 'Pendant' Fleur De Lis window that I made.   I made a very similar design way back towards the end of 2018 but this time around I enlarged the design by 15% and changed the color scheme to give the FDL a more 3D effect by utilizing three similar colors instead of two. 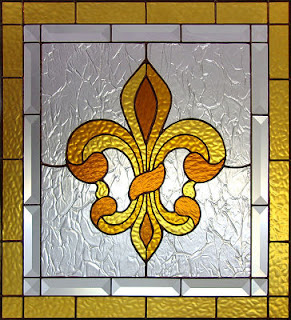 Okay so wait until you see this.  Cindy is working on a bowl design using a series of irregular shapes (and openings.)  She's using a stainless steel bowl to curve the design and in a complete stroke of ingeniousness she is building it inside the bowl rather than on the outside as one would 'normally' do when making something curved like this.  I've made so many lamps that my mind was stuck on building on the outside of the mold but Cindy's method is amazingly craft-- and so is her design!  I'm hoping this is finished next week because I can't wait to see it completed. 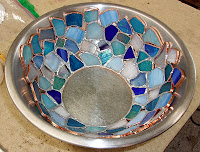 As I suspected, Judy has finished cutting all of the glass for her Teddy Bear Window and has moved along to grinding each of her pieces.   She's well under way and soon we'll see exactly what this Teddy Bear is going to look like.   She's worried that he might look a bit mean but I think it's only because the snout of the bear is black.   We're going to re-cut those two pieces out of a dark brown and I believe that color change will soften this bear up immensely. 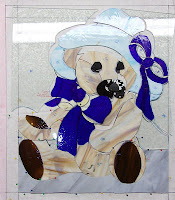 June has the majority of her Nursing Window wrapped which means that next week she'll be able to get this tacked together and then get the background cut to square it all off.  With a little luck she'll also be able to get a border cut as well.  I certainly have my fingers crossed. 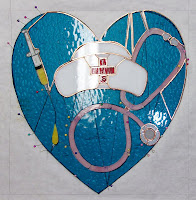 Susan D's Flower/Plate Window came into the shop completely ground.  That means that Susan put  her glass saw to work during the week because some of these pieces would have been a bit hit or miss had she tried to cut them by hand.  As you can see she has the center tacked together and her first border cut out and ready to be ground and wrapped.   The end is near! 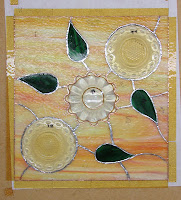 In a similar state of completion we next look at Mary's Cardinal and Sunflowers Window. She finished wrapping her pieces in class, tacked it together and then (like Susan) got her first border cut out.   Once her clear border is attached she'll move on to the second, wider border which will be cut from a darker blue glass.

Kerry has all but two leaves ground in his Circular Magnolia Window.  When he began grinding this I explained to him that the outside edge was the most important part of the pattern to follow and he obviously took my words to heart because this has been ground PERFECTLY.   Next week we'll easily see these pieces getting foil applied to them which will then lead to his tacking it together so he can fit the rounded border to it.  Circular windows are never easy but Kerry is making this one look downright simple! 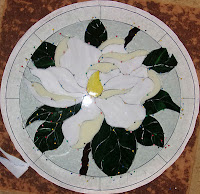 MiMi has only one row of hexagons left to grind before she can begin wrapping the pieces for her final Hexagon Window.   When she began this project last year she cut out hundreds of hexagons in assorted textures so that she could just assembling everything without stopping to cut more glass (hopefully).  Well, it turns out that she only has around 40 extra hexagons which means that for a rough guess she did incredibly or downright amazingly  well!  I want her around the next time I see that old 'guess how many jellybeans are in the jar' contest.

Barbara's Flower Panel Lamp got two more panels ground this week leaving her with only two more to go before she can assemble this.   The assembly will go fairly quickly so I'm thinking that she has only 2 or possibly 3 weeks worth of work left to go on this lamp before it will be ready to light up a room.

Lara has the first top most flower of her Peony Window all cut, ground, wrapped and tacked together.   By working with just one flower at a time she's reduced the complexity of her pattern and made the grinding of the leaves, branches and background pieces much easier to fit into place when she begins grinding them.

This might look familiar.  It's Betty's rendition of my 'Pendant' Fleur De Lis pattern only this one has been cut out of two shades of blue.  She started making this using just one piece of glass for the blue but when I showed her how much better it would look adding a second similar color she agreed to re-cut 7 of her pieces using a darker blue.  The end result has much more depth and Betty was happy to make the somewhat time consuming change. 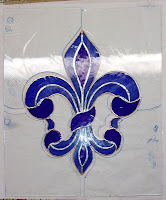 This week Cheryl tacked together her Tree Of Life Window and then traced it all out to create a new pattern so that she could fill in the pieces that were missing.  We've changed things here and there so her original pattern pieces no longer fit into place but now she's right back on track to getting this bright and colorful window hanging up! 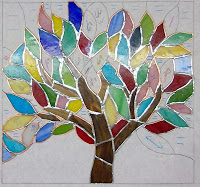 Cindy's Landon Blue Angels Box is so very close to being completed.  It only needs some solder on the back side of the lid and then Cindy will be able attach the hinge, wash it and call it complete.  To achieve the lettering we simply printed the word LANDON onto a special decal paper, affixed it to a piece of glass and then fired it in the kiln over night.  She had hoped to use an iridised white but the lettering flat out refused to adhere to the iridised coating.  Luckily we suspected that might be the case so we had also fired the lettering onto a plain piece of white as well.   Plan ahead! 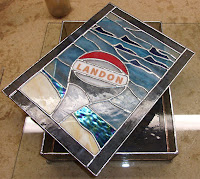 Here's a look at Martha's version of the Cardinal and Sunflowers Window.   She got everything ground while in class and hopes to wrap it  between classes but she's gone on vacation for a weekand I really don't expect her to come in with this all foiled and ready to be tacked.   Vacations are supposed to be for relaxing, not wrapping glass!

With almost all of her Peacock foiled I believe that it won't be long until we see Mary Grace getting some background cut for this second Peacock Window.   And when I say that 'it won't be long' I'm thinking that it might even begin happening next week.  Time will surely tell...

I had no clue how close to completion Susan R was on her newest Rosebud Ornament.   I thought she only had it tacked together but she's got it all soldered save for the final edge work which involves the 'tap tap' method as our students like to call it.  This will surely be completed within minutes when Susan walks back in the door next week!

And to wrap things up here we take a look at the Peony Window that Sheri has begun working on.   Like Lara, Sheri will be working on this one flower at a time and we'll see that first flower get some glass cut out for it when we return in our next post. 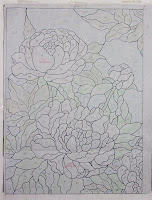 And there you have it.   Although this has been posted on time I have no way to send out the notification email because my computer died during a Thunder Storm last night and I can't access my email addresses.  Hopefully the new power supply will arrive Thursday and I can get things back to normal because working on this laptop is killing me.  Nothing is set up the way I'm used to and I'm having to locate and type in passwords for everything I do!
Paul
Bayou Salé GlassWorks
Posted by Bayou Salé GlassWorks at 12:10 AM