This Humming Bird and Iris Window has upped Sheri's ante when it comes to her stained glass talents. Her curves are all smooth and flowing (especially along the outer edge which is important because it isn't hidden by channel) and her pieces fit and align perfectly.   I love it! 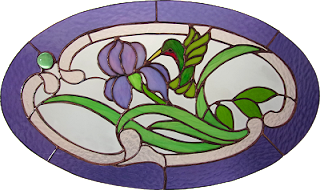 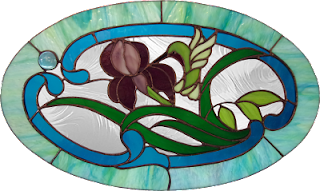 MiMi had a cow this week and it's the cutest thing.  Instead of having this hang from a window she made this as a standing piece that is propped up by a wooden base so Bessie can sit on a table or a desk.  MiMi even twisted a strand of wire to form the length of the tail.  Pure excellence!

Cindy completed this Santa Face during her brief time away from class and ended up with a charming gift.  Painted eyes put the finishing touch on this jolly little suncatcher. 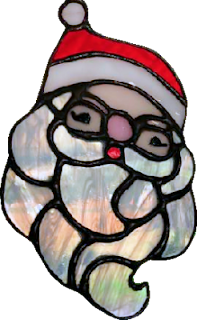 Now that my large windows have been completed (I'll feature them next week) I've been able to do a couple of small items over the past week.   This Angel Wing Cross was inspired by one of my favorite sources for ideas-- a piece of jewelry.  As I drew the pattern out I was unhappy with the conversion but a few changes here and there fixed it nicely. 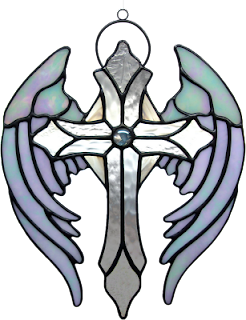 I also made this standard Dragonfly design but incorporated an unconventional background to it by using an unsymmetrical curved diamond design (I love to buck symmetry and throw in curves and angles whenever I can).  This also featured filigree wings which helps to make it resemble a piece that L.C. Tiffany might have created. 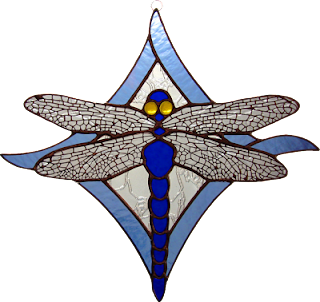 Dragonflies abound with Betty as she knocked out 4 more of them while in class.  Yes, I can count and realize that I only have two pictured but that's all that I took pictures of.  Her use of silverware handles for the dragonfly's bodies along with decorative solder drops has made these Betty's trademark piece. 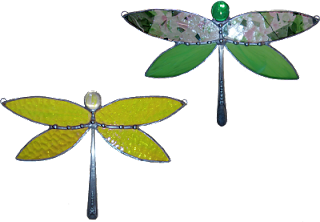 Martha is working on her own Sewing Machine Window and with just three hours of work in on it I must say that she's making excellent time with it.  This is the third version of this window that we've seen made in as many months and Martha was not afraid to create her own color scheme. 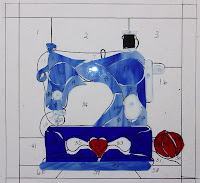 June has started this wonderfully proud Cat Suncatcher which she will be turning into an actual  window.  She's managed to cut it all out in one night and will begin grinding it when she returns.  Once that's done she'll tack it together and cut out her background glass.  Easy peasy lemon squeezy!

With her Humming Bird  window off of her work table, Let has decided to fill the empty space by making this fancy Rose/Cross Suncatcher.   I've always admired this pattern because it puts the cross at two different angles making it unsymmetrical in a lovely and delicate way. 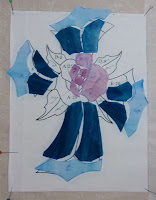 Linda F has started the new year by beginning a geometric Window with a twist-- there are barely any straight lines in it. Oh, they are there but you really have to look for them.  This is a window that pulls you in because of the way it all flows and connects.

Then there's Linda L who has started her three panel Nativity Scene as early as possible because she says that if she waits until the end of the year she's concerned that she might not have it done in time for Christmas.  This IS the way to handle things-- do what NEEDS to be done first, then move along to the things you want to do which don't have a deadline.

Cheryl has the majority of her new Cardinal Window cut out already.  The few remaining pieces will be cut when she returns and then she'll be able to move on over to the grinder.  This will feature the same border system that her last cardinal window incorporated so they'll be a matching pair.  (While bucking symmetry!) 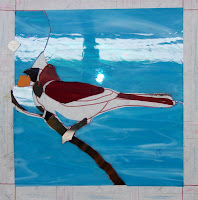 Cindy is working on a Dog Window with a background that will contrast wonderfully with the pure black dog head.   It's all about flowers and yes, it will be a lot of work but the end result is going to be spectacular, mark my words.

On the opposite side of the spectrum we look at Shelley's pure black Cat Head Suncatcher.   This is an angled project that rests flush against the side of a window so that it appears as though the cat is outside looking in.   This will be completed before you know it because Shelley already has it almost completely cut out.

Aside from glare of the flash from my camera, Melissa's numbers on her Address Window are clearly and perfectly visible.  I see so many of these stained glass address windows that have little to no contrast between the numbers and the glass that surrounds them thus making them barely readable and mostly useless.  Melissa has made sure that is NOT the case here!

Jan's got her Lady of Guadalupe back under construction.  With only the background and border (which is barely worth mentioning) left to cut and grind I think it's safe to say that this lady has been tamed.  Jan's both relieved and thrilled to know that this is almost behind her and that she can begin something new soon.

MiMi has filled in her twelve long and narrow edge pieces all the while cutting out the delicate points with absolute ease.   Not a single point was broken (which wasn't easy to accomplish) and next week she'll tackle the two borders that will finish all the cutting for this piece.   The closeup I've provided highlights the length and thinness of the curved pieces that she cut this week. 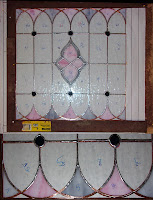 Susan R is working on a second 3D Pansy Flower Pot Ornament and she already has all of the glass cut out with (I think) all of it ground as well!  I always say that the second time is the charm but Susan didn't even have a problem with this on her first trip across the dance floor with it. 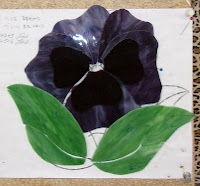 Mary Grace is rolling right along on the first of three text sections of her business logo window.  With the word HEALTH largely cut and ground she began wrapping each of the pieces that she deemed satisfactory.   Once she has all of this wrapped she'll tack it together and then she'll fill in the pieces that she was unhappy with.  She's already taken the pattern for the next word 'WELLNESS' home with her so she can get a head start on the next phase of this multi stage project. 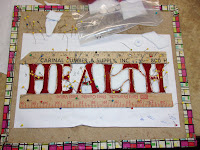 Lastly we look at one of the many  Cardinals that Betty has begun working on.  I may have spoken out of place earlier when I said that Silverware Dragonflies were her signature piece because I do believe that she makes a Cardinal along with every Dragonfly she creates.