Sheila completed her third cabinet door insert and started to work on the colored pieces of her last window while she was in class this week. You can see that she's moving along faster and faster with each duplicate panel she makes. Look for her last panel soon! 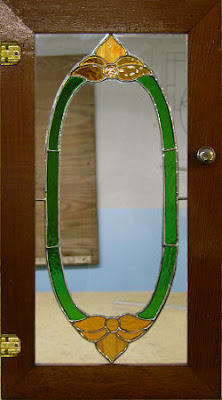 Barbara is nearly completed with her three window. She finished the second window (which is a mirror image of the first one) and then began work on her center window. The third panel is much easier to do and she'll be finishing it while she's at home during the week. That means that we'll get the three of them completed in the next posting! Meanwhile, here's her second panel.

Ann got her final border wrapped and soldered into place on her window. AFter adding a brass channel to the edges she began putting a finished solder bead on the front of her window. By the time she moved on to the second side she had mastered the technique and was running a nice lead line over everything. There's no doubt in my mind that we'll see this window completed next week since she only has about half of the back side to do. 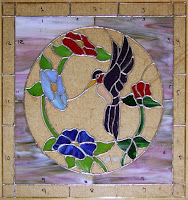 Jane began cutting and grinding a lot of her glass for her lamp and you can see some of it laid out in place on the pattern here. This is only one third of the pattern so you are only seeing a small portion of the pieces needed to complete this shade.