Don't Hate The Player...Hate The Game

This time around we start by taking a look at Anita's completed Black Window.  The black glass she used for the background lets no light through which means that the transparent colored glass she used for the rest of it really stands out when there's light behind it.  This is actually the first of 3 windows that Anita will be making in this motif. Hopefully we'll see the others soon! 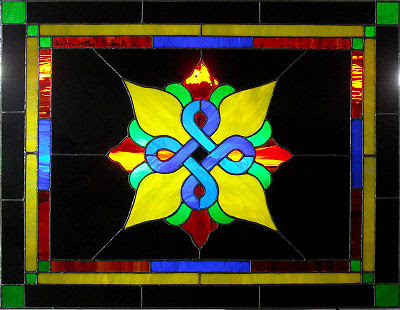 Ann's Flower Window is coming along better than ever.  There's only the center left to go before she gets to work wrapping all of these pieces.   I'm not sure if I mentioned it or not but this is a large window that measures almost 3 feet across.  It's an ambitious project and she's doing great! 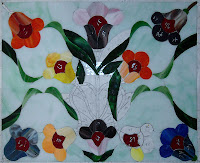 Myrt has the last border cut on her semi-Victorian themed window and it's just about ready to be tacked into place.  This design has been raising eyebrows in the shop and it wouldn't surprise me if we see more of these being made later on.

Cindy had all four of her corner sections completed when she came in to class so she worked on cutting, grinding and attaching the background of her Diamond Fleur De Lis window.   She decided to go with a clear glue chip glass and now all this needs is a border to finish off the cutting process. 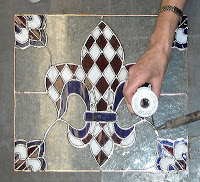 Lastly we look at Terry's jewel encrusted Fleur De Lis.  She originally cut a standard border but after seeing how it looked she decided to add iridized globs on every other other lead line (of the border).  She thought about using them on every line but after polling the class we all thought it looked best with 2 globs on each side.   We'll see this window completed in our next update. 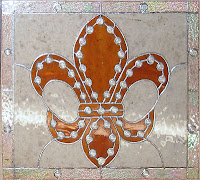 Speaking of the next update, I've had it pretty easy with the last Blog post and this one.  Both were small classes and easy to do but the next one appears to have a lot of pictures that I need to edit so I'm thinking that one will be completed Friday rather than Thursday.  Either way, we'll have three new posts here before the weekend.  Yippie!