The Flower Hand Mirrors have certainly been a popular item this year with our students as well as the new modified cross pattern.  Myrt's been working on multiple sets of both items and we'll start this off by looking at her latest Hand Mirror and her latest Cross. 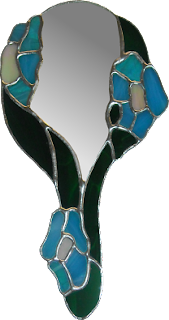 Myrt's Cross is the newest version of a pattern that's been around for a while now.  It started off being a simple symmetrical cross with a diamond center.  Then someone wanted one a little different so we rounded the points on every other piece that makes up the cross.  The final additions were the 4 pie wedges that make up the circle that the cross sits in front of. 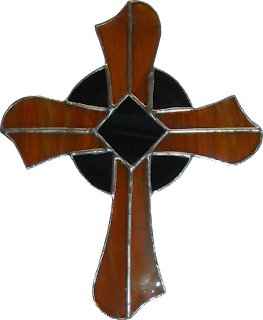 This is a second cross that Myrt made this week but she didn't get it washed or colored for me to get a completed picture of it.  Because of that this will have to do. 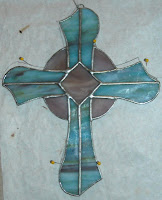 Ann needed to do some surgery on her large Flower window.  She accidentally broke one of the side pieces and didn't have a big enough piece of scrap glass to re-cut it so she added extra leaves and flowers on both sides to balance it all off.  And if I hadn't told you this story you'd never know there was a problem.  Anyway, it's all tacked together now and next she'll add a border and some channel before getting ready to put the final soldering job on this window. 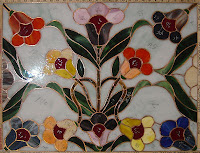 Bonnie not only managed to get all of her large Butterfly cut out, she also has it all ground and half wrapped.  I think it's safe to say that this will be flying out the door any day now!

"Trust me."  Yeah, famous last words.  I said that we'd grind the background and then lay the Dragonfly on top of it, trace around it and then re-cut the pieces for a perfect fit.  But when Patty finished grinding and asked about doing that I said to go ahead and wrap it all instead.  Before she left I realized that I forgot to show her how to cut in the Dragonfly and now I'll never live it down.

Terry is all set to begin wrapping her Egret Window.  There are 2 pieces of tree missing in the picture but that's only because she had them over at the grinder while I was snapping my pictures.  And guess what Terry will be doing next when she completes this project.  Another Egret!  When you're on a roll....

Here's a look at one of the hand mirrors that Cindy is working on.  The glass shows you how far she is on the project but the paper that the pattern is drawn on shows you just how many of these she's made.  It may be time to retrace this pattern because it's certain getting awfully ratty looking! (The pattern not the mirror itself!)

Roxie has decided to make one of the Butterfly Lawn Ornaments that we last saw done about 2 years ago.  Since she has all of her pieces cut and ground she'll be foiling them so she can tack this all together next week and hopefully take it home with her.  She'll tack these 2 wings together at an angle to give this butterfly a 3D look and then attach it to a post so she can put it in her flower bed. 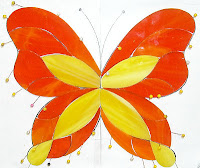 In the immortal words of Porky the Pig I will leave you with a, "Th-th-th-th-that's all, folks!"

Posted by Bayou Salé GlassWorks at 12:25 AM