It's been a while again so we're going to be doing a marathon catch up session here.  Luckily, since we've had many students participating in extracurricular events on class nights there isn't a whole lot to report.  Sooooo, we should be able to catch up within a week or so.

Ok, so let's look at Cindy's Fleur De Tiger Eye Window.  She completed this a while back and now we're getting a look at it for the first time off of the table and with some light behind it.  Cindy's been doing excellent work and she's been doing a lot of it at home.  And I have to say yet again that she loves the small pieces. 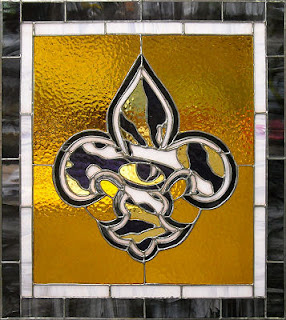 This is a look at Cindy's other work in progress-- a Fleur De Lis made of diamonds. Originally designed and made by Terry, Cindy just loved the look of this window and said she had to do it as well.  She's altered the colors a bit to give it a patriotic flavor and as seen below she's working on the 4 smaller FDL's that go in each of the corners. 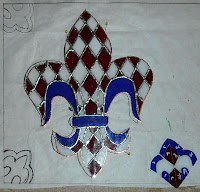 Ann has made great progress on her large Flower Window.  A lot of the outside edge of this window has now been ground and there's really just the bottom right corner and the center that needs to be fitted into place at this point. 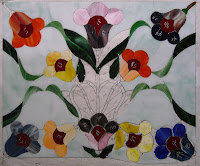 Myrt's Semi-Victorian styled window is really taking shape now.  It's tacked together and her inner border is cut and ready to be wrapped.  Myrt is probably going to be taking a break from this window since she has a few smaller stained glass items to make before graduation comes around.  Rush orders always take precedent...

Terry had an interesting idea and added some clear iridized  lobs as a trim of sorts to her latest Fleur De Lis window.  Talk about a striking effect.  I can't wait to see this one lit up.  And wait until you see how she carries this theme into her border. 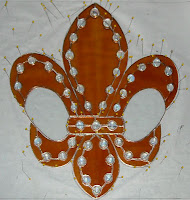 Lastly we take a look at a window that Anita made a long time ago.  Sadly there was a crack in the sky and when she replaced it the color was very much off from the rest of the glass.  To make matters even worse the glass was discontinued which means that what you are looking at below is the same window that you saw months ago but with a completely new sky.  It took a lot of work to break out and replace all the blue sky pieces but Anita managed like a pro.  And looking at it now you'd never suspect that so much of this window was recently replaced.

We'll have another update within a day or so so keep your eyes opened for that familiar notice in your email box.