Glass headed pins certainly have their place when it comes to making stained glass.  If you're using plastic head pins to hold your pieces into place when you are tacking your project together and your soldering iron bumps against them, well, everyone knows that you're tacking without having to look up...

Let's start this off with a look at Cindy's completed Diamond Fleur De Lis Window.  Geometric designs like this need to be done precisely because your eye will immediately see where the pattern isn't symmetrical.  A flower can be off, even a face can be off and it will still look fine, but a window like this needs to be balanced perfectly and Cindy succeeded in doing that on all counts. 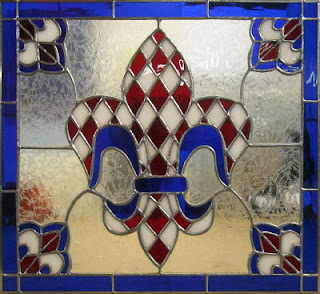 Myrt has made her first Flower Hand Mirror and she's incorporated the initial 'J" on the leaf on the left side of this mirror.  She's taken a break from the Semi-Victorian window she's been making so she can get a few smaller items (crosses and hand mirrors) finished before the school year ends.  Why the rush?  Because she's retiring and doesn't plan on going back to school after this year is over!  All I know is that if the rest of her mirrors turn out as nice as this one Myrt will always be remembered fondly. 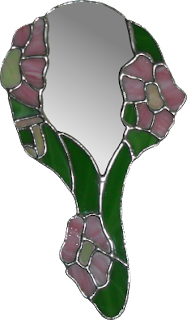 As you may recall Roxie is also making Flower Hand Mirrors and although hers don't have initials they certainly look just as nice.  As I've said before, I never would have thought to use this color combination but perhaps that's why I like Roxie's version so much.  This is the last of Roxie's mirrors and next week she'll be moving on to butterflies. 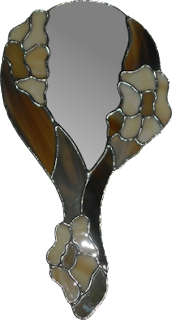 Susan put the finishing touches on her Shrimp De Lis Lawn Ornament during this class and once again her attention to detail made a beautiful finished project.  This piece gets staked into the ground in a flower bed and gives a very Louisiana feel to the yard.  The wire work on this project that forms the shrimps legs and antennae adds so much to this piece that without it you wouldn't even realize what it was. 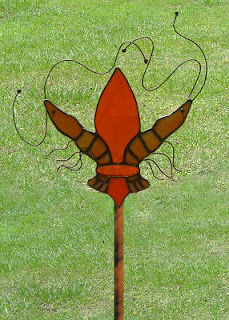 Susan didn't end the class by completing her Shrimp De Lis--  She also managed to get this American Flag Ornament cut out and ground as well.  She bundled these pieces up with her and has taken them home to wrap so I'm sure it will be together before we know it. 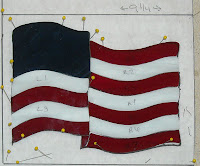 Myrt also worked on another project this week as well.  Her second Hand Mirror has different colors from the one she finished and it's missing the initial on the side but the workmanship is the same as it always is with Myrt's projects. Flawless.

Bonnie made short work of her butterfly this week.  Not only has she gotten far more confident with her ability to pick out colors but she's also managed to get this all cut out and have some of it ground before she walked out the door at the end of class. Isn't this colorful? 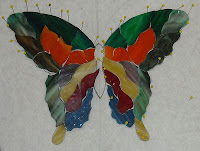 Sonia's Pokeno Girls are just about ready to be walkin' away and out the door.  Everything is cut, ground and tacked together so once she decides on a border color this window will be just about set.  Choosing a color for the border on a colorful window like this is very important.  The wrong color will easily throw the whole project off so I'm guessing that the decision will be a group effort.  I can't wait to see this up in the air with some light behind it. 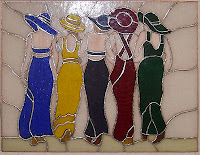 Terry's latest Egret Window is also moving right along.  About all that's left for her to cut are the 2 trees that border the left and right of this piece.   Since Terry's been grinding this as she's been cutting she'll be able to start foiling her pieces (wrapping them) soon.  And we all know that Terry makes short work when it comes to soldering her windows.  :-)

Here's Patty's Dragonfly Window with the background all cut out.  I know this will be hard to believe when you look at the picture but this hasn't even been ground yet!  The Dragonfly is actually just resting on top of the finished pieces so that everything fits together perfectly. Once it's all ground and fitted she'll place the Dragonfly on top of her background, trace around it and make a few cuts to ensure a perfect fit. This project is near completion so expect to see it finished soon.

And that's about all there is for this weeks update.  With Myrt and Cindy both working on hand mirrors I was a bit confused about who made what but I think I have it sorted out correctly.  If not I'll made a correction in the next post.