I'll be the first to admit that it's been a while and I have no idea which butterfly is Terry's and which one is Myrt's anymore. I did know at the time but that was a few weeks ago and my mind isn't what it used to be. So here's my guess with a 50/50 shot of getting the owners correct.

So then, we had 2 new students join us this week and we all know the drill when that happens: A glass cutting lesson followed by a butterfly. This is the butterfly that Terry made (if she didn't make this one then it's Myrts) Nonetheless, Terry had no problems at all in her first class and I know she'll take to this easily. 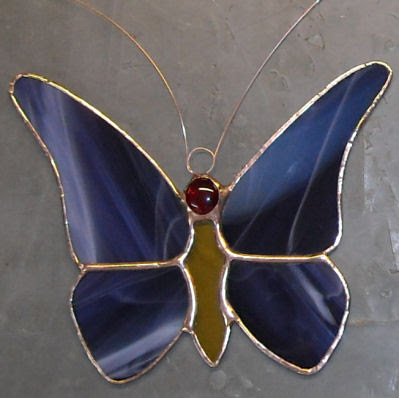 Hopefully this is the butterfly that Myrt made. Like Terry, Myrt showed a natural ability to cut glass so these both turned out perfectly regardless of who made which one. Look for bigger and better things from Myrt and Terry in the weeks to come. 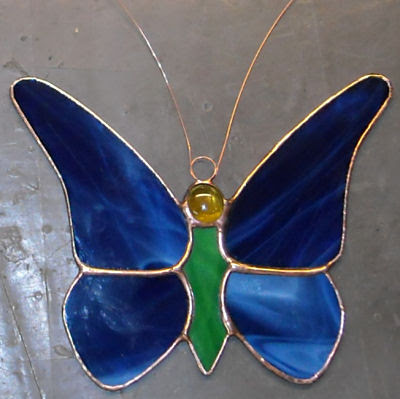 Identifying student projects doesn't get any easier with our next two projects. Both Suzy and Roxie decided to make Oil Wand Kaleidoscopes and they both decided to make them out of the same glass. So, once again, I have no clue which one belongs to whom. In the end I suppose it doesn't really matter since they're both identical. This is the one that Suzy is working on:

And the one below is (maybe?) the one that Roxie is making. All the hard work was completed on these during this class. All that's left to do is install the mirrors, cap off the end with 2 solder lines and then make stands for them. These aren't standard Kaleidoscopes because instead of a wheel that must be spun to see the effect, a clear tube filled with oil and glitter is mounted on the front of these. All you have to do is watch as the glitter slowly descends down the length of the tube in front of the mirrors to make the kaleidoscope effect. We'll get a look at still images of what it shows in our next post.

Janice is SO close to completion on her last window. The borders are attached and the front is soldered. That means that this will be completed next week (I know this for a fact) and Janice will be FREE of her year long project! 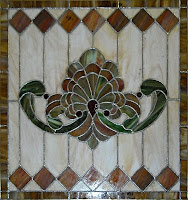 Grace has all of her Sports De Lis center together and has drawn out a pattern to cut the background glass. She's picked a nice unevenly textured clear that will give the window an old feel to it. This is coming out nicely. 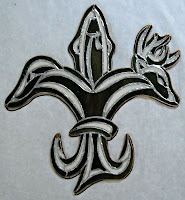 Cheryl has attached the border to her window and I fixed the piece that I broke when I was was moving it to her car the other week (hey, what can I say, I'm only human). With everything soldered the only thing left to do is add the zinc channel to this and then wash it and color it.

Bonnie has been unbelievably busy making her Fleur De Lis windows. She has 4 more cut out this week: 2 in amber and 2 in purple. All four are stacked up on top of each other here but you get the general idea of how busy she's been! She'll be grinding some of these as well as cutting some more out next week. 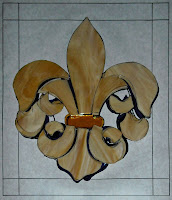 Make sure you come back for our next post when we'll see a finished kaleidoscope and take one last look at Janice's final window.