Wellllllllll, obviously we have a finished window at Bayou Salé GlassWorks.

This is Michele's completed window and, yes, it's her first window. It took longer than 5 weeks to complete but not that much more and just look at this thing! The background gives this window a very traditional design and the Fleur De Lis make it say Louisiana in a subtle yet striking way. 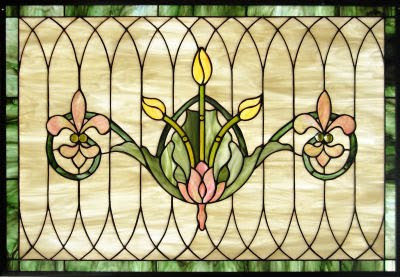 Terry is almost all set here. All she needs to do is grind and wrap a few more pieces and then she can tack this together. Once that's done she'll cut the remaining 8 pieces that make up her background. 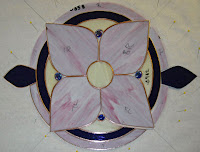 Myrt finished up her Coffee Pot and then cut, ground and wrapped her second center piece for her other cabinet door-- the Coffee Cup. The next step is to put these in clear glass and then solder them so we should be seeing these finished in no time now. 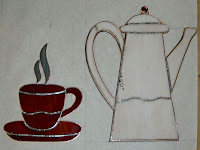 Jane's lamp is all tacked together. Not only is it tacked but the top half of it is soldered! When she came in she continued soldering and now there's only the bottom sections left to go. There's a slight problem with the cap which is about 1/16th of an inch too small to cover the opening on the top of the lamp in some sections. Rather than go with a much bigger cap that hides more of the glass we're going to wrap a wire around the bottom of the cap and solder the cap and the wire together seamlessly. No one will ever know that the wire is there and we won't see light coming out of the small gaps that are visible right now. It's a simple solution to a pesky problem. 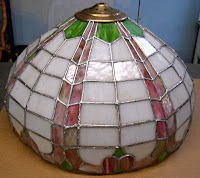 Bonnie has been on a cutting and grinding frenzy here in class. I'm losing track of what she's been doing but I know her stack of Fleur De Lis windows is growing bigger and bigger each week. We're going to concentrate on getting some of these completed so she can get some money coming in rather than just shelling out money for these. :-)

And Patty's Sport's De Lis window is just about completed. She's soldering it now and she already has her mind set on making a few Oil Scope Kaleidoscopes after this. Aparently she really liked the one that Roxie completed last week. Look for the finished version of Patty's SDL window in our next post. 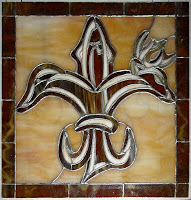 So you can run and tell that, homeboy!