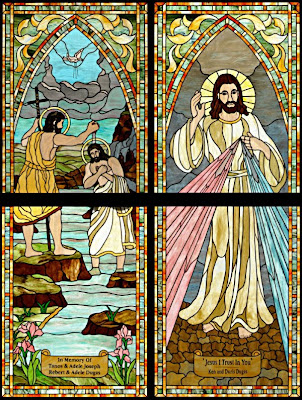 Back in May we met with Ken Dugas and his daughter, Mary Lee who were looking to donate 2 windows to St. Jules Catholic Church in Franklin, LA. It had been about 5 years since they began looking for someone to help realize this labor of love for their God and their parents without finding anyone they felt comfortable with in handling this task. Shortly after our meeting we were honored with the request to help them fulfill their dream. We drew up the patterns and at the end of June they came back to approve the full sized drawings and to pick out the glass we would use to make their windows.

The idea of having a window made came from Ken's Wife, Doris. Before she had passed away she requested that a window be constructed in memory of her parents and Ken's parents. The inscription on this one would be easy:

In Memory Of
Tanos & Adele Joseph
Rebert & Adele Dugas
Ken had decided that he wanted a second window in recognition of his wife (Mary's mother). The original inscription was going to read,

In Memory Of
Ken and Doris Dugas
But after some thought Ken decided that it should be changed since the text could be interpreted that Doris and Ken had both passed on. After some deliberation the text was changed to,

'Jesus I Trust in You'
Ken & Doris Dugas
Work began on the windows shortly after the 4th of July and Mary and Ken were updated with photos of the progress. We were hoping to install the windows between the 20th and the 24th of September which afforded us little time. We hit a few snags along the way and during the last week we had issues with the flashed glass we had originally chose to inscribe the text into but on the night of the 23rd of September the windows were complete.
The next day we arrived at St. Jules and spent approximately 4 hours installing them. When we stepped back and saw them in place we were able to really see the windows as a finished piece rather than hundreds of pieces of glass assembled and laid out on a table. To say that we were pleased with the outcome is an understatement.

The next day Mary picked up her father and took him to the church so they could look at the windows together. Mary told us that they loved them and that they spend equal amounts of time laughing and crying at what they had managed to accomplish for the church. Ken made the comment that his work here was complete now that his wife's request had been fulfilled.

On Sunday Ken went to church with his grand daughter so she could see the windows with him for the first time during Mass. At the time no one knew that it would be the only Mass that Ken would attend where he could look upward and see the windows that he had helped create.

Sadly, during the following week, Ken passed away. Knowing that he was able to see a dream of his accomplished puts a smile on our faces here but the smile does nothing to cover the tears in our eyes. Ken Dugas left a mark in the world and in the church he loved so much.

Thank you Ken and Mary for the pleasure of knowing the two of you. 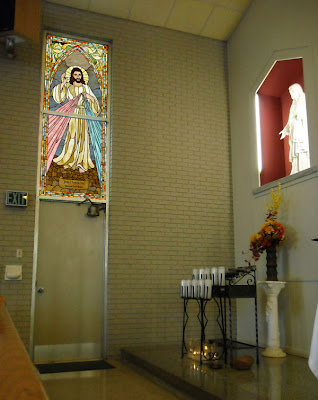 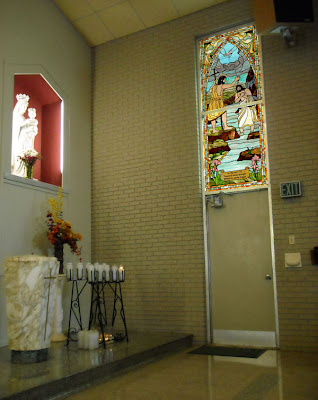