Shira's completed her Fleur De Lis Window and without a doubt, it's a hit. We've seen this pattern take off and be used before she has even managed to complete it so you know a lot of people saw that this was going to be a great design even when it was still in pieces on the table. 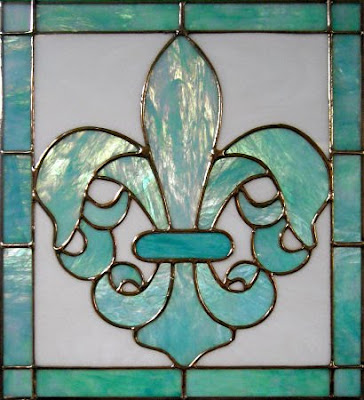 Suzie was in this week and now has her background tacked on to her window. Next week she'll add a border to her window and be all set for solder. It looks like we'll see this one finished shortly thereafter. 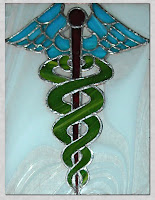 Patty came in with her pieces wrapped in copper foil and then tacked and soldered the 2 oil kaleidoscopes together. She only needs to insert the mirrors and solder the end pieces on to finish these. She also cut the glass for the stands and took that home with her so they're be ready for assembly next week just in time to take them all home.

Bonnie's been hard at work on her Fleur De Lis. Her husband Brian was also in class this week and brought along a stained glass guitar that he made at home. It's unfortunate that I didn't have my camera with me to get a picture of his first project because it was really something to be proud of. Bonnie appears to be a good teacher! These are an old look at some of the windows that Bonnie is working on. As I said, I didn't have a camera this week to actually show you what she completed. :-( 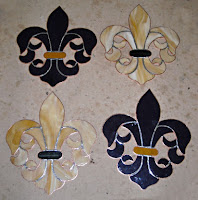 And there's a new Fleur De Lis in town! It's smaller and much more complex than the one that Bonnie, Shira and Myrt is making. Roxie decided that she'd make this FDL to go either along side of, or in between the letters UL. Right now we're leaning toward the side but we'll know for sure next week when we can move things around and position them to see what things will look like. 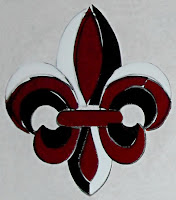 And that was all we had for this week. We'll have a small set of classes next time around and then be back to standard operating procedure here at the studio.